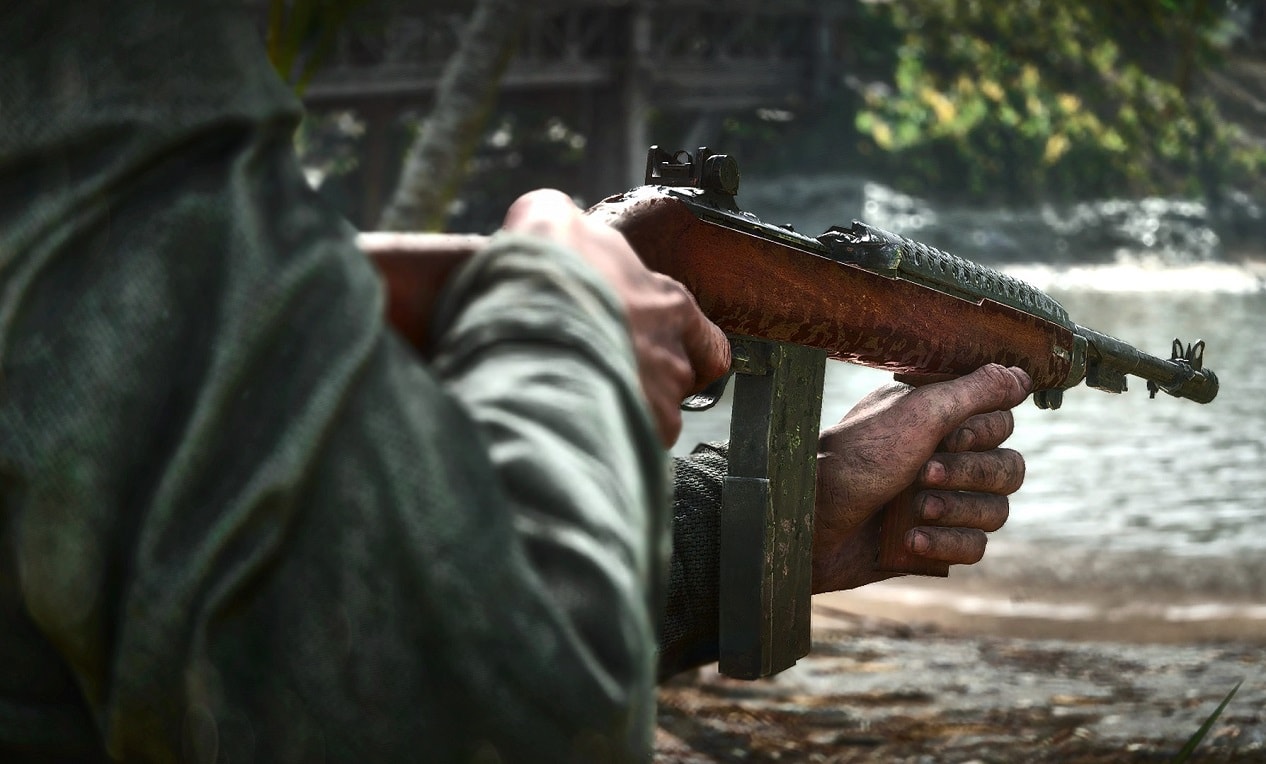 M2 Carbine: A 7 Minute History – Germany is generally credited with developing the first assault rifle with the MP-43, which entered service with select units towards the end of 1943. Later renamed the Sturmgewehr 44—literally “assault rifle 44”—this used an intermediate-strength kurz cartridge that balanced the long-range accuracy of heavy, slow-firing bolt-action rifles then prevalent with the automatic-fire capability of submachine guns, which were deadlier at close quarters and capable of laying heavy suppressing fire for infantry assaults.

However, the United States was not very far behind. Late in 1944, it began issuing fully automatic M2 Carbines to Marines and U.S. Army soldiers. Therein, however, lies the controversy: can a fully-automatic “carbine” properly be described as an assault “rifle”?

The M2 was a simple modification of the ubiquitous M1 Carbine. Carbines are infantry rifles shortened for portability, originally conceived as a handier weapon for cavalry. Immediately prior to World War II, the U.S. Ordnance Department appreciated that the advent of paratroopers and fast-moving armored columns meant that rear-line support and artillery units were more likely than ever to be ambushed by enemy forces. The rear-echelon troops needed self-defense weapons with more firepower than a pistol, but that weren’t as cumbersome as long, 9.5-pound M1 Garand rifles that were difficult to lug in and out of a vehicle.

A design team at Winchester came up with the M1 Carbine, which used a short-stroke gas piston for semi-automatic fire—simplified from an earlier version intended for automatic fire. The handy carbine had curved wooden stock, weighed only 5.2 pounds unloaded, measured 35.6 inches long, and came with a built-in sling-slot, making it highly portable. The wooden-stock M1 used a unique intermediate-strength .30 caliber cartridge, with hitting power in between that of a pistol and rifle round, that remained accurate up to 180 meters.

Over six million M1 Carbines were produced by nine different companies, averaging a unit cost of only $45. Many made their way from support troops and vehicle crews to grunts on the front line, some of whom preferred the lighter weapon to a service rifle. It was widely adopted by U.S. Marines in the Pacific, who often fought in in dense jungle terrain in which engagement ranges were short; moreover, the M1’s fifteen-round box magazine proved advantageous compared to the eight-round clips used by the Garand. An M1A1 variant with a folding metal stock was also produced for paratroopers. Even the German military captured enough that they designated it the Selbstladekarabiner 455(a).

In 1943, the War Office decided to produce an M2 Carbine capable of automatic fire, entailing the addition of a small number additional parts, and strengthening the butt of the gun and the magazine intake. The new weapon had a cyclic fire rate of 750 rounds per minute, and could use a new curved thirty-round magazine. Externally, the M1 and M2 seemed almost identical, save for a fire-selector switch and a “2” etched on the latter’s receiver ring. Numerous kits were also issued to convert M1s to M2s.

Small numbers of M2s made their way to the troops in the closing engagement of World War II in the Pacific, particularly in the brutal Battle for Okinawa. However, they saw wider-scale action five years later in the Korean War. There, the carbines allowed rear-area troops to quickly lay down heavy suppressive fire in response to ambushes by Communist infiltrators, who liked to sneak as close as possible to American lines to make effective use of their PPsH-41 ‘burp guns.” Because the M2 was capable of responding with automatic fire, it was also favored for leading night patrols, where combat would inevitably occur at short range.

The Army even deployed over two thousand night-fighting variants of the M2 to battle in Okinawa and Korea, designated the M3. These had a flash suppressor and an early M2 or M3 infrared sniper scope, coupled with a huge infrared spotlight attachment, allowing a viewing range of up to roughly ninety to 115 meters. The extra equipment weighed a whopping twenty-eight additional pounds, and so was mostly used from static entrenched positions to spot and eliminate approaching infiltrators at night. You can check out the bizarre-looking M3 in this video.

However, Army historian S. L. A. Marshall documented the downside of issuing large numbers of automatic rifles. In a survey, he found that inexperienced draftees tended to waste ammunition firing prolonged, inaccurate bursts at long range rather than switching to semiautomatic fire when appropriate. This could leave them short on ammunition by the time Communist troops charged them at short range. On the other hand, the carbine performed well when employed by soldiers with the fire discipline to switch between semiautomatic and fully automatic fire based on the proximity of the enemy.

A problem the M2 shared with the M1 was that the intermediate-power rounds did not always drop enemies they hit, especially at long range. The cartridges were also prone to leaving rust deposits when left in a loaded carbine for several weeks.

The M2 Carbine would remain in U.S. military service into the 1960s, even as the Army adopted the large M14 battle rifle and then the iconic M16 assault rifle still in use today. Reportedly, some South Vietnamese and U.S. Special Forces units and helicopter crews preferred to hold onto their M2s rather than convert to the new M16s, which despite their superior ranged accuracy initially suffered teething issues.

M1 and M2 Carbines were also used extensively in combat in Algeria, the Philippines, Israel and Ireland. While the American carbines finally began fading from military service after the 1970s, the M1 and M2 are still in use with police forces in Latin America and Asia today, with particularly large numbers in Brazil, South Korea and Taiwan.

There is some contention as to whether the M2 constituted an actual assault “rifle.” Strictly speaking, a carbine is distinguished from a rifle due to its shorter barrel and effective firing range. However, the M2’s eighteen-inch barrel is longer than both the German MP-43 (14.5 inches) and the legendary AK-47 (16 inches), both of which are indisputably assault rifles. On the other hand, the latter weapons were heavier and had more powerful intermediate-strength cartridges, giving them greater effective range than the M2—though some argue the ballistic gap between the carbine’s .30 caliber round and MP-43 7.62 kurz round was actually not that great, except in terms of penetration.

The M2 simply does not fit neatly into modern weapon classifications, save perhaps as a personal defense weapon. However, it was indisputably the U.S. military’s first portable long-arm automatic weapon to see wide-scale use. It reflected a growing recognition that infantry engagements typically occurred at shorter ranges, and that sheer portability could be a kind of force multiplier, while also demonstrating the shortcomings of using lower-powered cartridges and trusting inexperienced soldiers to refrain from blazing away with automatic fire at distant targets. Striking the right balance between long-range accuracy, short-range burst capability and portability has been a priority in U.S. service rifles ever since.

Sébastien Roblin writes on the technical, historical and political aspects of international security and conflict for publications including the 19FortyFive, The National Interest, NBC News, Forbes.com and War is Boring.  He holds a Master’s degree from Georgetown University and served with the Peace Corps in China.  You can follow his articles on Twitter.