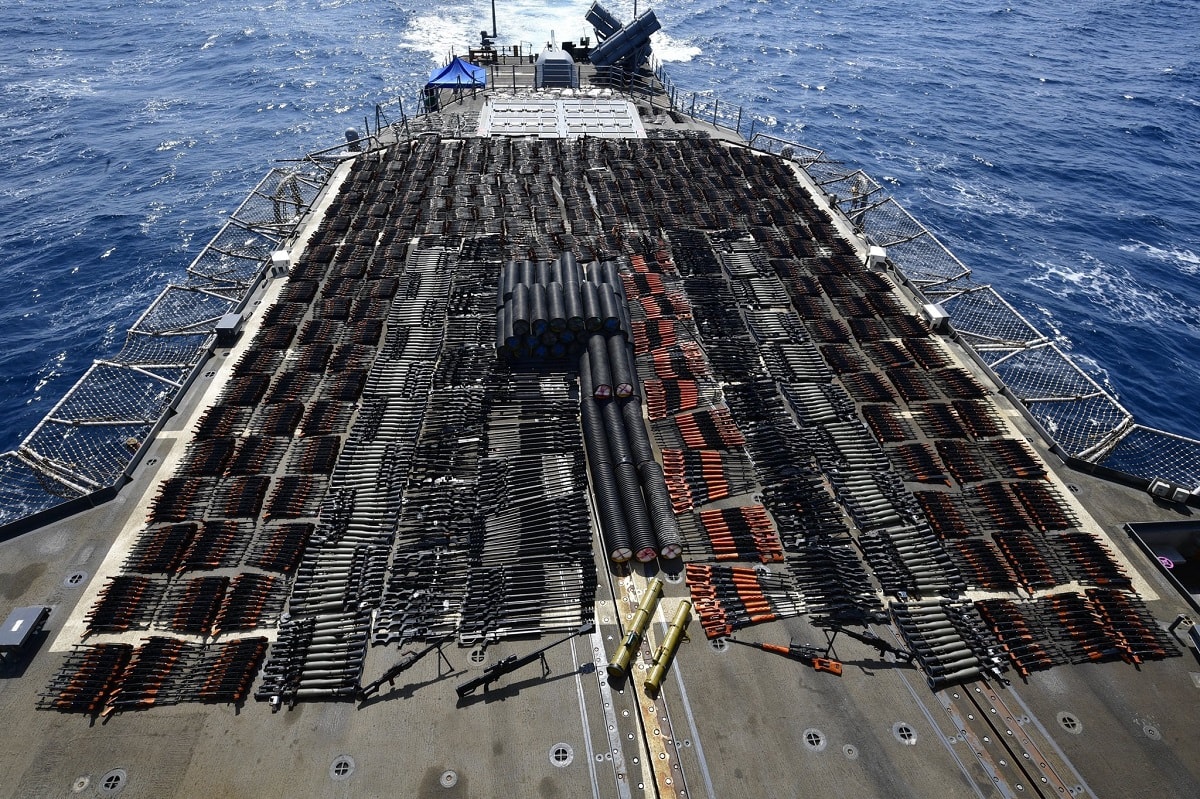 The United States Navy‘s Fifth Fleet announced that earlier this month, the guided-missile cruiser USS Monterey (CG 61) successfully helped stop the flow of illicit weapons that could be used by insurgent forces in the Middle East. Thousands of small arms were seized from a small stateless dhow in the North Arabian Sea during routine operations to verify the vessel’s registry.

Dhows are common in the region and are used as trading vessels, to primarily carry heavy items including fruit, freshwater, or even heavy merchandise.

A U.S. Coast Guard Advanced Interdiction Team was deployed on the Navy’s warship and when they boarded the dhow they found the weapons stash.

The Navy has said the original source and intended destination of the materials are now under investigation and the cargo remains in U.S. custody awaiting final disposition. Photos released on the U.S. Fifth Fleet’s social media account (@US5thFleet) showed the weapons lined up on the rear flight deck of the guided-missile cruiser.

The Ticonderoga-class Monterey provided more than thirty-six hours of overwatch and security for its boarding teams and the interdicted vessel throughout the two-day operation, while the weapons were transferred over.

After all illicit cargo was removed, the dhow was assessed for seaworthiness, and after questioning, its crew was provided food and water before being released, the Navy reported.

This is also the third such seizure by the Fifth Fleet and one of the largest in recent years. According to CNN, on February 9, 2020, the Ticonderoga-class guided-missile cruiser USS Normandy (CG-6) stopped a dhow in the Arabian Sea and seized missile components, while on November 25, 2019, the Arleigh Burke-class guided-missile destroyer USS Forrest Sherman (DDG-98) recovered missile components from dhow it stopped in the same waters.

The U.S. Navy continues to conduct routine patrols in the region to ensure the free flow of commerce for legitimate traffic, disrupt the transport of illicit cargo that often funds terrorism and unlawful activity, and safeguard the rules-based international order.

CG-61 is the fourth U.S. Navy vessel to be named for the Battle of Monterrey at Monterrey, Nuevo León during the Mexican–American War in 1846. She was built at Bath Iron Works in Maine, and was commissioned in June 16, 1990. The Ticonderoga-class Monterey has been operating in the region since earlier this year, but last December the U.S. Navy’s Report to Congress on the Annual Long-Range Plan for Construction of Naval Vessels stated that the ship was planned to be placed Out of Commission in Reserve in 2022.