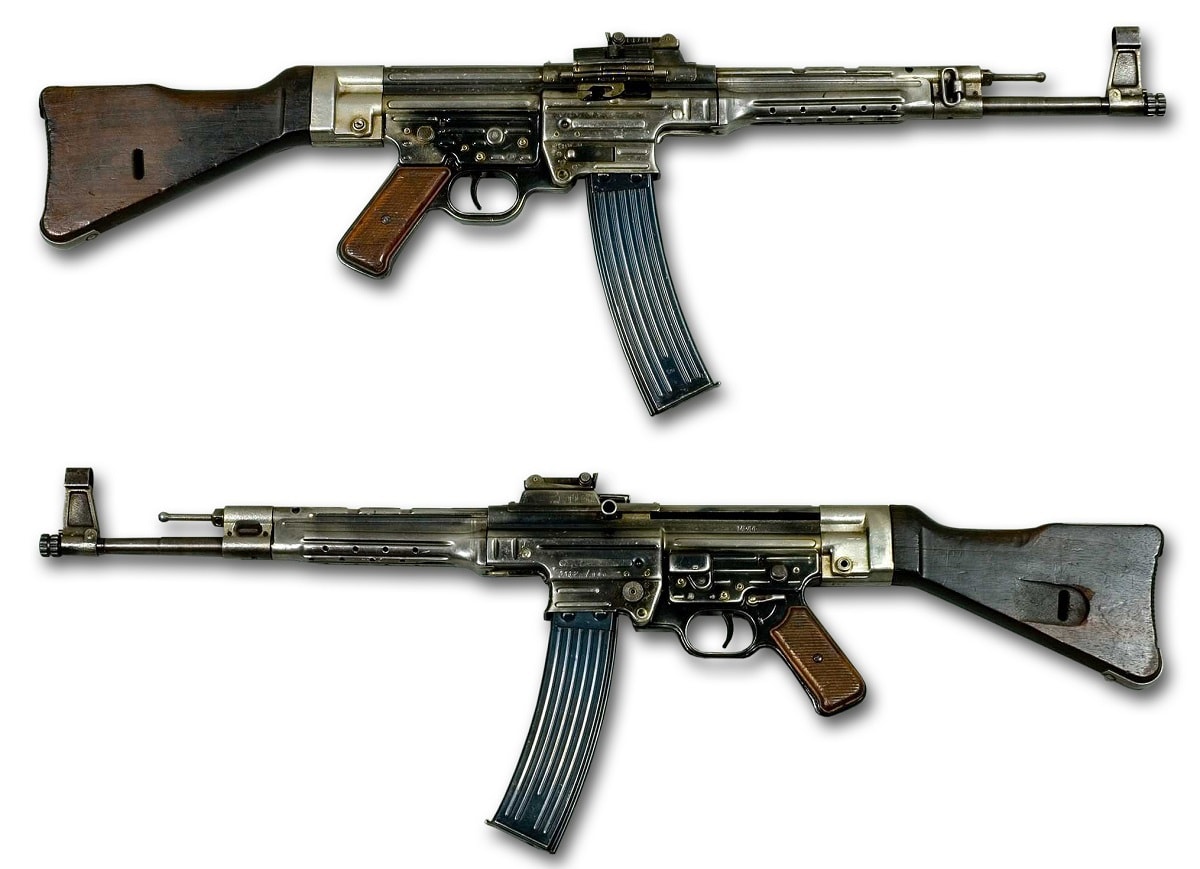 The United States had the world’s most prolific firearms designer in John Browning, who went on to design the Browning Automatic Rifle, the Colt M1911 .45 pistol, and countless other firearms. Germany had Hugo Schmeisser, who had helped develop the world’s first submachine gun, the MP-18.

As a leading German arms designer, he developed the world’s first “assault rifle.” Schmeisser’s weapon was the Sturmgewehr – originally developed as the MP-43/44 (Maschinenpistole 43/44). This particular weapon was notable for several reasons, one of the most important being its intermediate caliber cartridge.

The Surmgewehr was designed for use for the new 7.42x33mm Kurz cartridge, which was itself designed to be lighter than the 7.92x57mm rifle cartridge, but heavier than the 9mm cartridges used in pistols and submachine guns – such as the MP-38/40.

The Kurz cartridge was also notable in that it incorporated a bit more taper than larger rifle versions because it was developed to use steel cases due to brass shortages. Steel is less elastic than brass. In the end, this resulted in the need for the curve of the magazine, a feature that has come to signify most modern assault rifles.

The first attempt to develop what would become the Sturmgewehr was Schmisser’sMaschinenkarabiner1942 or MKb 42, which literally translated to “machine carbine.” It was a gas-operated weapon that featured selective-fire for semi-automatic and fully automatic firing modes. Two different actual designs were tested and it was the MKb 42(H), developed by German arms maker Haenel that eventually won out, and some 50 prototypes were produced for field testing on the Eastern Front.

This new rifle was seen by some as a potential game-changer – but that didn’t include those at the highest levels. According to widely told stories, Adolf Hitler was against the development of a new rifle and saw the need for new submachine guns instead.

The Waffenamt – Armament Office – found a workaround. Instead of developing a new gun the MKb 42 was re-designated Maschinenpistole 43 or MP-43. This made it sound – in name at least – as if it was a successor of the MP-38/40 and not an entirely new design.

The longstanding rumor is that Hitler found out about the deception yet after some convincing allowed further evaluation. Then in April 1944 after those tests, the weapon was officially re-designated MP-44 and it is possible that the name would have been how it was known to the world.

Then in July of that year during a meeting of army heads, there was a discussion of the success of the “new rifle” being used on the Russian Front. Commanders in the field wanted more of those rifles, after finally being given an actual demonstration of the weapon. When he saw it in action Hitler was apparently impressed – and the popular legend is that he suggested it be dubbed a “storm (assault) rifle” and it earned the moniker Sturmgewehr or StG-44.

The weapon was issued originally to German forces on the Russian Front to counter the Soviet’s PPSh-41, which was the largest produced sub-machinegun during the Second World War. Given its rate of fire of 550-600rpm, and the fact that it was reliable in the extreme cold of the Russian winter made it an excellent weapon for that theater of operations.

However, Germany was losing the war and while the original plan was to replace the KAR 98K bolt action rifles, this was feasibly impossible. And while the StG44 was a great weapon it actually created an ammunition problem for German industry, which was already on its knees.

The world’s first assault rifle has had a lasting legacy beyond its influence on other weapons. It was used by the East German military throughout the 1950s and of the nearly half a million that were made thousands ended up being used in other conflicts. Interestingly some 5,000 may have been found in a cache of old weapons in Syria and were still being used by Syrian rebels.