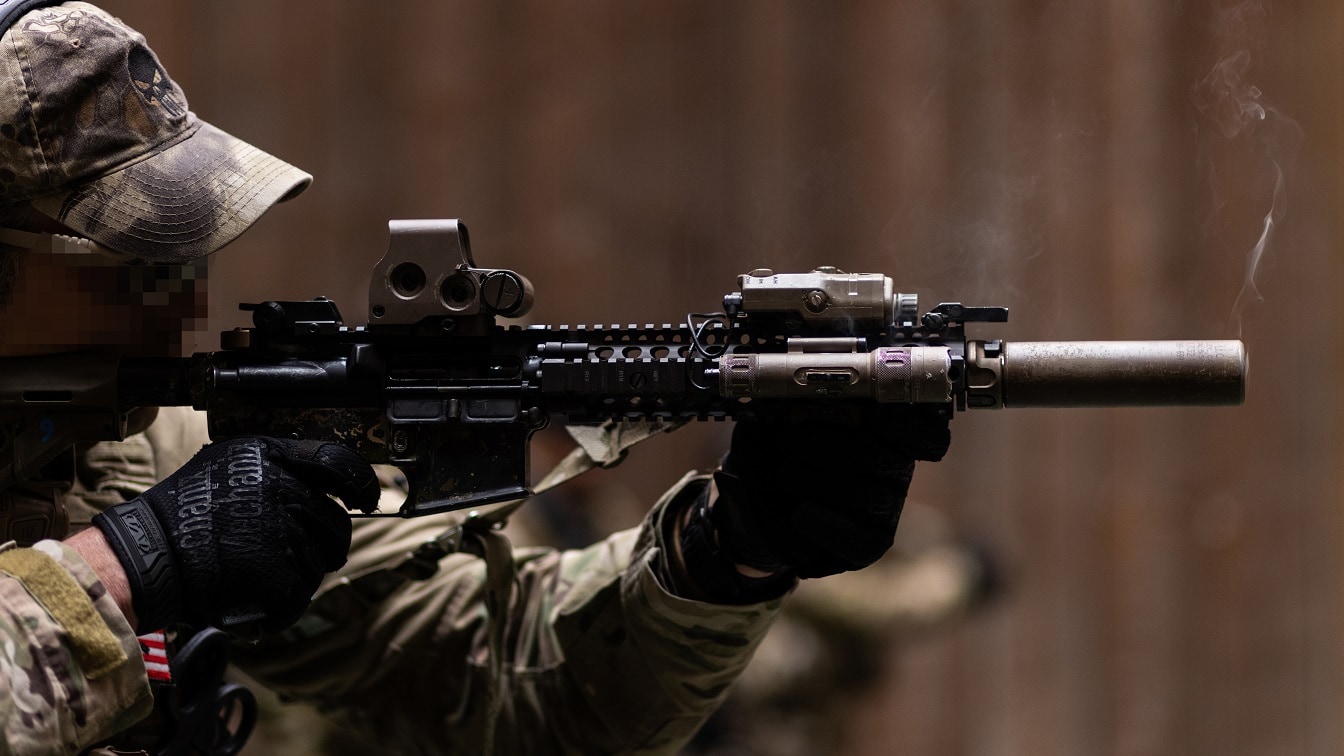 STUTTGART, GERMANY (April 16, 2021) Smoke curls from the barrel of a Special Forces soldier’s M4 carbine during a live-fire range at Panzer Kaserne. Marksmanship training ensures that the soldiers, assigned to 10th Special Forces Group, are able to fire pistols and rifles accurately under a variety of conditions. (U.S. Navy photo by Lieutenant Robert Kunzig)

US Army Alerts North Carolina Civilians of Large Special Forces Exercise – “Robin Sage”: “Free Pineland!” If you live in about 20 counties in the mountains of North Carolina in the next few weeks, you will hear this call quite often.

The U.S. Army John F. Kennedy Special Warfare Center and School said in a news release that “Robin Sage” is set to run from January 22 – February 4. The news release went out to all of the local news outlets to inform the citizens as well as local law enforcement officials.

Robin Sage is the final test for candidates wishing to become members of the U.S. Army Special Forces (Green Berets). While this “unconventional warfare exercise is the final phase of their training, it has been ongoing for them in many cases for over a year.

What Is Robin Sage?

The training for Robin Sage can be very realistic, with blank rifle and machine-gun fire, flares, and simulated explosions. And in many instances, the Special Forces candidates in Robin Sage will be wearing civilian clothes. The Army didn’t want to panic citizens believing that a terrorist or criminal activity was taking place.

This unique unconventional-warfare or UW, training environment is designed to allow instructors to stress the candidates’ student Operational Detachment Alphas (A-Teams, the standard operating unit of Special Forces), assessing their ability to think on their feet and accomplish their team’s assigned missions. The teams are inserted into the politically unstable country of Pineland. The prospective Green Berets will be opposed by members of the 82nd Airborne, who in this case are the opposing force (OPFOR). Civilians from the region will act as an auxiliary, the underground, and other roles, as their knowledge of the operational area is superb.

That instability, coupled with working alongside guerrillas who may act (and frequently do) outside of the rules of warfare while engaged in open warfare will put the teams into frequently faced “real-world” situations. It is NOT an exercise to prepare the U.S for civil war as many on social media have tried to foolishly point out. Robin Sage has been conducted by Special Forces candidates for about 60 years.

Robin Sage, derives its name from the town of Robbins, N.C., a central area of operations for the exercise, and former Army Colonel Jerry Sage, a World War II veteran and an Office of Strategic Services, (OSS) officer who taught unconventional-warfare tactics. Steve McQueen’s character Hilts in the film “The Great Escape” was based on Sage. Sage was an OSS operative, the forerunner of today’s Green Berets and CIA. 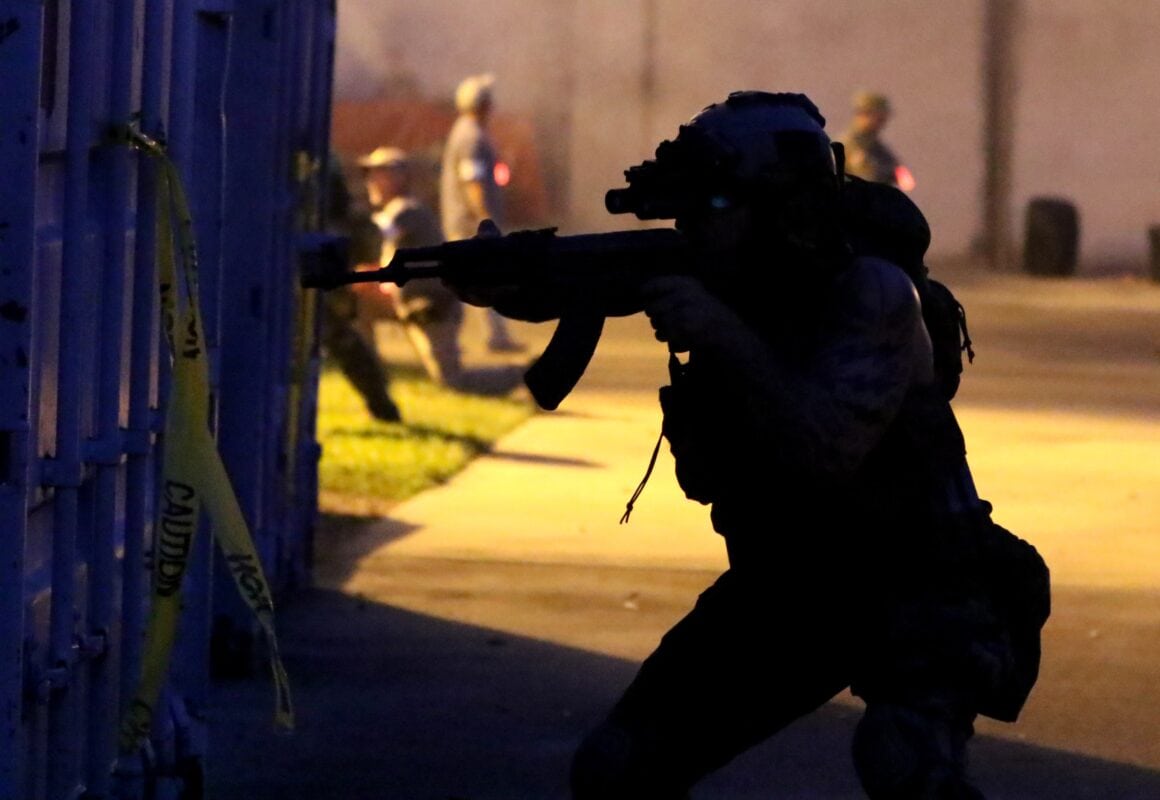 An enemy role player fires a weapon at Special Forces candidates from the U.S. Army John F. Kennedy Special Warfare Center and School during the evaluation and final phase of field training known as Robin Sage in central North Carolina, July 16, 2019. Robin Sage has been the litmus test for Soldiers striving to earn the Green Beret for more than 40 years. (U.S. Army photo by K. Kassens)

The student “A-Teams” will be working with all three resistance factions, the guerillas, who are the armed band of the resistance but the auxiliary and the underground, which are key components to the resistance and are both very valuable tools for the prospective SF soldiers.

Special Forces’ bread and butter is working by, with and through local partner forces, building rapport with indigenous people in their assigned areas of operation. Nearly every other mission that SF is tasked with will have that as a key component. Therefore, language and cross-cultural communications are very important. Robin Sage is the culmination of the entire Special Forces Qualification Course as it prepares the prospective Special Forces operator for a variety of missions and most importantly how to work with indigenous forces.

But building rapport with guerrilla forces in Robin Sage is not easy, if the students fail to do so, they will fail, not only their mission but the course. The soldiers acting as guerrillas are briefed to avoid interaction with the SF students at first and to act distrustful until they prove themselves.

And the key component in deciding how and when the team wins over the guerrilla force is the “G-Chief” or guerrilla chief. The guerrillas will take their cues from the G-Chief, usually a retired SF operator who will be a difficult guy to win over, as one would be in the real world.

The scenario remains basically the same as it always has, however, the US Army John F. Kennedy Special Warfare Center and School (SWC, known as “swick”), cadre will tailor to closer fit current events and scenarios that the troops will face in the real world. 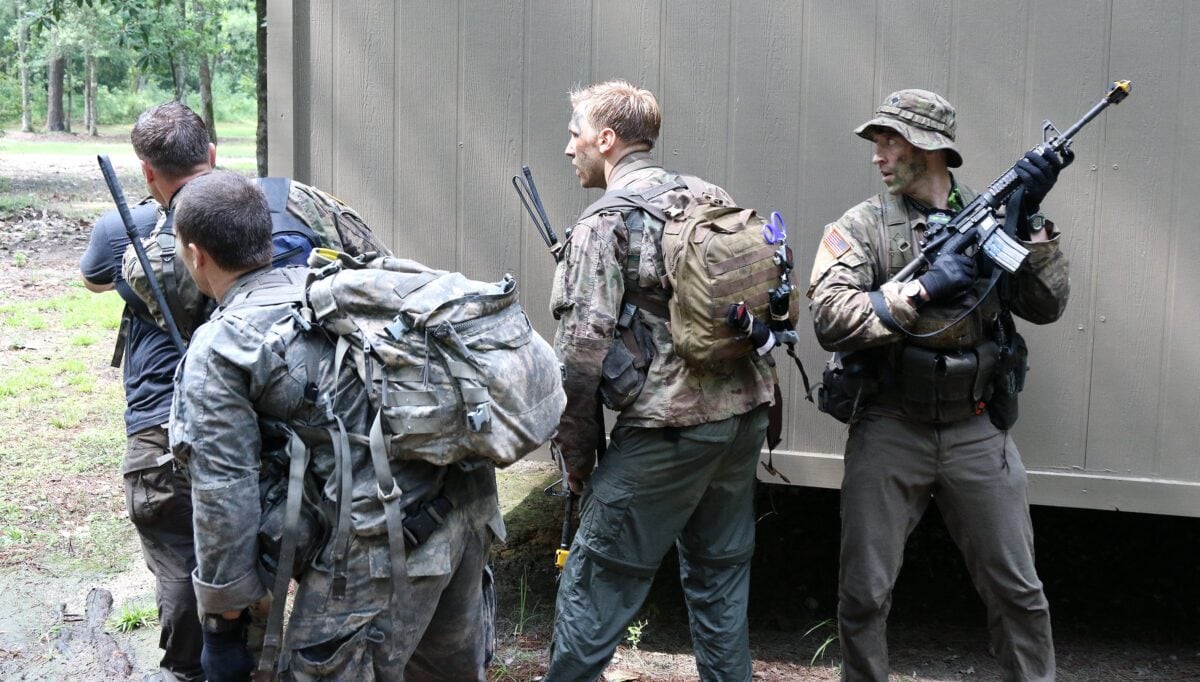 Special Forces candidates from the U.S. Army John F. Kennedy Special Warfare Center and School prepare to attack a target during the evaluation and final phase of field training known as Robin Sage in central North Carolina, July 16, 2019. Robin Sage has been the litmus test for Soldiers striving to earn the Green Beret for more than 40 years. (U.S. Army photo by K. Kassens)

The former government of Pineland was a friendly one to the United States. Following a coup that deposed the legitimate government, the SF students work with an eclectic mix of role players and soft skill MOS soldiers to raise and train a guerrilla force that will fight the enemy government troops and attempt to restore the true Pineland government. They’ll teach them the basics of patrolling, raids and ambushes, communications, and medical training.

The scenario was developed by the SWC to train Special Forces soldiers in unconventional warfare.

The Army in its press release, stressed the realism that locals may encounter.

“To add realism of the exercise, civilian volunteers throughout the state act as role players. Participation by these volunteers is crucial to the success of this training, and past trainees attest to the realism they add to the exercise.”

The reason for the advance warning stems from an incident in 2002 when a Moore County Sherrif shot and killed one student and wounded another, mistaking the exercise for criminal activity. The students believed that the sheriff’s deputy was part of the training scenario. Now students, when in civilian clothes wear brown armbands to identify them as part of the Robin Sage scenario.