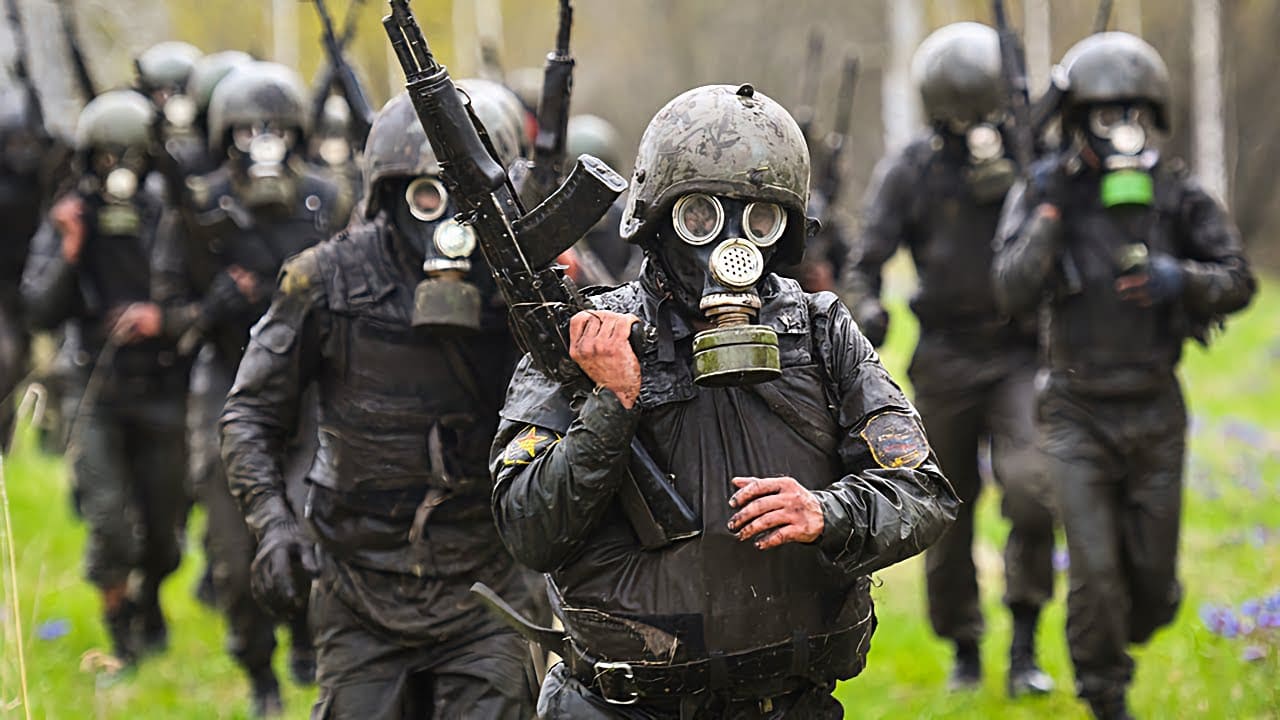 A Russian Invasion Is Sure to Involve Russian SOF, Spetsnaz: The intense situation around Ukraine shows little sign of abating. There are negotiations happening at the U.N. beginning on Monday and official responses being traded back and forth. But with more than 127,000 Russian troops surrounding Ukraine on three sides, the outlook for a peaceful settlement appears, at least for now, bleak.

If the Russians do indeed invade Ukraine again, one can assume that the elite Spetsnaz will once again play a large role, as when the Russians annexed Crimea and sponsored an insurgency in the Donbas.

Russia’s Spetsnaz: Who Are They?

Spetsnaz isn’t one elite unit but consists of several different ones in both military and police forces. Some of Russia’s best-trained troops come from Spetsnaz, or Special Purpose Units. Spetsnaz units and missions closely resemble those of the U.S. Army’s 75th Ranger Regiment.

Spetsnaz units were created after World War II. The GRU (Main Intelligence Directorate of the Armed Forces) underwent a reorganization in which independent special-purpose reconnaissance companies were formed in 1949. These grew to battalions in 1957 and then to brigades averaging between 1,000 to 1,300 men in 1962. Spetsnaz are said to currently number 15,000.

Missions in the Crimea and Eastern Ukraine:

When Russia decided to annex Crimea in 2014, Spetsnaz units played a major role. It is important to look at this as they’ll probably be used in a similar role should the conflict once again ignite in Ukraine.

As the situation commenced between Russia and Ukraine on February 22, 2014, the Russians mobilized battalions of Spetsnaz and Airborne units and moved them close to the straits that separate Ukraine from Russia. The GRU sent several hundred members of the 45th Spetsnaz Regiment to create a “popular uprising”  whose aim was to facilitate Russia’s annexation plans.

On the 25th, a Russian amphibious ship landed 200 KSSO Special Operations Forces in Sebastopol. On February 27, 50 Spetsnaz troops pretending to be a local “self-defense militia” seized the Crimean Parliament and raised a Russian flag over the building. Ukrainian war correspondent Inna Zolotukhina wrote in her book (The War From Its First Days), that the forces occupying the SBU headquarters in the Eastern Ukrainian city of Sloviansk in late April 2014 “were dressed and equipped exactly as the fighters from Ramzan Kadyrov’s Vostok Battalion I had seen in Crimea two months earlier.”

They were the famous “little green men” who wore uniforms with no identifying patches equipped with body armor and night-vision devices and armed with sniper rifles, machine guns, and heavy rocket-propelled grenades.

They were effective in using their best-trained, most professional forces and suffered very few casualties while mounting operations to envelop numerically superior forces. And learning from the painful lessons of Chechnya and Georgia, the Russian troops were referred to as the “polite people”.

In another invasion of Ukraine, Spetsnaz troops would be used as a deep reconnaissance to scout out targets for Russian airstrikes and artillery. They would also be used to assassinate targeted members of Ukraine’s military and government. They are a formidable foe.

Naval Spetsnaz, which trained for maritime warfare, consisted of a headquarters group, three battalions of combat swimmers, and a parachute battalion. Midget submarines were also assigned to the brigade.

Both army and navy units were designed to operate in small eight-man detachments. Yet, they were also trained to work together as a much larger force on short notice depending on the mission.

Both Army GRU and Naval Spetsnaz contained a brigade-level anti-VIP company of about 80 men whose primary mission was to assassinate military and political leaders. This capability has been used on several occasions.

Spetsnaz units concealed themselves among regular units by donning identical uniforms, with GRU teams sporting the blue beret of the VDV (airborne) as well as its camouflage and dress uniforms. This was standard practice to conceal identities and movement as well as numbers assigned in each service.

Spetsnaz numbers peaked during the 1980s, when more than 30,000 men in 20 Army and Naval Brigades served along with dozens of independent companies, mainly in the Warsaw Pact states. With the emergence of terror as a weapon in the early 1970s, more specialized Spetsnaz units were created within other parts of the Soviet government.

Group “Alpha” was created in 1974 as a 30-man counter-terrorism (CT) unit that was operationally controlled by the KGB (now FSB). Group Alpha now numbers about 700 troops. Like Western Counterterrorism forces, its men train in storming ships, buildings, aircraft, and buses.

In 1981 the group “Vympel” was created. It was operationally controlled by the KGB. Vympel troops are the best trained of any Spetsnaz unit, with each man specializing in different areas, such as piloting, medicine, driving various armored vehicles, martial arts, expert marksmen, and language fluency.

With an estimated strength of about 1,000, these men run covert operations, in addition to providing a Quick Reaction Force stationed to protect nuclear power plants in Russia.

Unlike GRU Spetsnaz, both Alpha and Vympel units sport maroon berets and often wear black combat uniforms, unless serving with other units when they don similar outfits.

The MVD (Russian Interior Ministry) created a Spetsnaz unit drawn from a rapid response team, drug enforcement, and prison guard teams. These Spetsnaz troops act as a kind of SWAT team, specializing in domestic counter-insurgency, counter-terrorism, and border security. They make up some 25 units. These men wear a red beret along with the dress and camo uniforms of the ministry.

Spetsnaz training includes but is not limited to the following:

Each class has about 150-170 candidates and the attrition rate hovers around 90-95 percent. Yet, those who do graduate gain access to the best weapons and equipment Russia can provide, along with the best training. One common Spetsnaz saying is, “You make the man a weapon.”

Volunteers for Alpha or Vympel units must already be Spetsnaz-qualified and undergo further specialized training. While classified, this training is known to consist of daily nine-km morning runs, followed up by 65 to 70 km forced marches with combat loads approaching 40kg (88lbs) in freezing weather with little to no water.

Two months of basic training and three to four years of advanced training are needed before being allowed to join either group.

The MVD training course dispenses with some of the military fields but is still intense. It includes 100-meter sprints, 12 km cross-country running in full combat uniform, urban assault exercises with wall climbing, acrobatic exercises, and a 12-minute free-style sparring match with three separate opponents. Courses are held twice a year and less than 10 percent of candidates are known to pass.

Spetsnaz operators have been active in Syria even before the official September 2015 Russian intervention. Army Spetsnaz units secured the Hmeimim airbase at Latakia and Tartus naval facility and provided reconnaissance in the targeting of airstrikes.

The Small Wars Journal reported that Russians also deployed Spetsnaz from GRU. At the peak of the deployment, there was a battalion of 230-250 men, probably drawn from several units, including Naval Spetsnaz from the 431st Naval Reconnaissance Brigade. There was also a team of operators from the newly formed Special Operations Command (KSSO) mainly snipers (or rather counter-snipers) and reconnaissance troops.

Naval Spetsnaz has also conducted its own clandestine actions. They have been rumored to have conducted operations in parts of remote Alaska and neighboring islands.

The suspicious death of an Alaskan National Guardsman in the 1980s was said to have occurred when he stumbled upon a Spetsnaz unit dispatched from a mini-sub on Little Diomede Island. A piece of Soviet-made equipment was found near his body, and though there has never been confirmation or denial from the U.S. government.

During the fighting in Kosovo and the Balkans in 2001, Russian Spetsnaz and U.S. Green Berets conducted a joint operation against a group called the Liberation Army of Presevo, Medveda, and Bujanovac (UCPMB).

Yet, these types of joint operations seem to be a thing of the past as relations between the U.S. and Russia deteriorate.