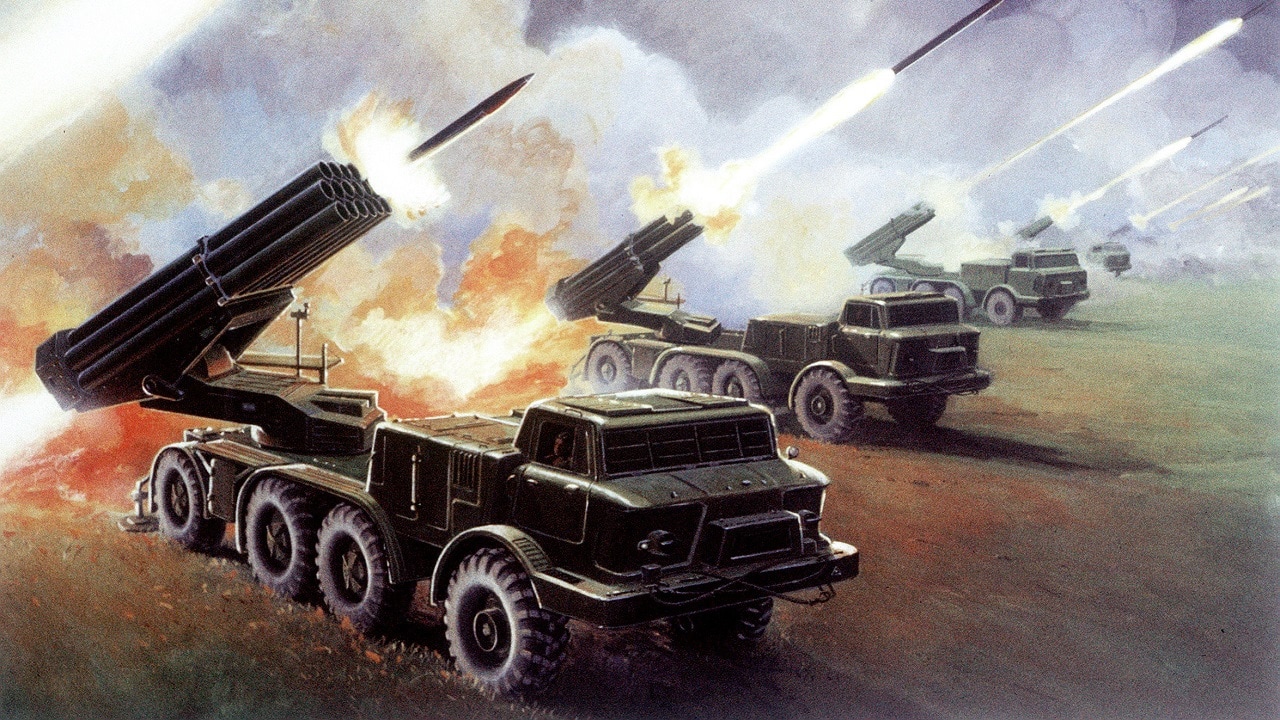 Russia’s ‘Hurricane’ Multiple-Launch Rocket System Terrorizing Ukrainian Cities – Russia is using rocket systems against Ukrainian population centers that are not precision-guided. Their indiscriminate use has the International Criminal Court investigating the Russians for war crimes.

One such multiple-launch rocket system is the BM-27 Uragan (Hurricane). The Soviet-era Uragan packs a frightening punch. It can keep up a fast pace of deadly fire as the system takes only 15 to 20 minutes to re-load. The Russians are increasingly using siege mentality attacks against Ukrainian cities and the Uragan will continue to be a featured weapon to harass Ukrainian citizens.

The Uragan mobile launch system is truck-mounted on a Zil-135 8X8 chassis. This mobility can take the system out of range of most Ukrainian counter-fire radars since the Uragan’s range is nearly 22 miles. However, the United States has given Ukraine 20 newer AN/TQP-53 Quick Reaction counterbattery radars. This radar can spot a rocket launcher up to 37 miles away. The Ukrainians should have these arrayed around cities which will give them an ability to blast the Uragan with counter-battery fire and fighter-bomber strikes.

The Uragan is a Cold War-era relic having entered the Russian rocket-launch arsenal in 1977, but it can do significant damage if undetected. The rockets are 220mm with a 16-round launcher that can fire two rounds per second. Most rockets carry high-explosive fragmentary warheads that scatter on impact, but other warheads are available such as chemical and incendiary types. Some projectiles can also disperse anti-tank mines with high armor-piercing capability. The rockets are about 16-feet long and weigh 114 pounds.

“The Uragan has a reputation for high reliability, simplicity, speed of operation and maintenance, and a short salvo time,” according to Army Technology.

Russia’s Uragan Does Have Weaknesses

The Uragan is designed to be deployed behind friendly lines. It has weak armor, and the four-man crew is endangered if the system is confronted by enemy artillery fire. The truck has a top speed of only 40 miles per hour from its two engines that produce a combined 360-horsepower. The Uragan also needs a support truck to carry more rockets. These logistics vehicles can also be targeted by Ukrainian counter-battery fire.

Russia Strikes: Civilians Are In the Cross-fire

The problem with these rockets is that they are unguided and designed to take out area targets without precision. They can be re-loaded quickly and can saturate enemy territory. Their indiscriminate fire lends to more civilian damages when the rockets are aimed at residential areas. People moving out in the open or traveling in buses or cars trying to escape the battlefield are endangered.

To neutralize this threat, the Ukrainians will have to use their own counter-battery radar and have accurate fires from friendly artillery. These modern radar units from the United States that can detect the Uragan are limited in number. The Ukrainians likely have these radar units arrayed around Kyiv.

The civilian destruction caused by multiple-launch rockets systems like the Uragan encouraged 39 countries to call for war crimes and crimes against humanity investigation by the International Criminal Court at the end of February. This allows the chief prosecutor, British-lawyer Karim Khan, to go directly into investigatory mode without the need for an ICC judge’s order.

Despite this investigation, Russia is not likely to stop using the rockets against cities. The Ukrainians can only hope for a ceasefire that would allow civilians to escape via humanitarian corridors. Until that happens, they are at the mercy of multiple rocket launch rocket systems like the Uragan.