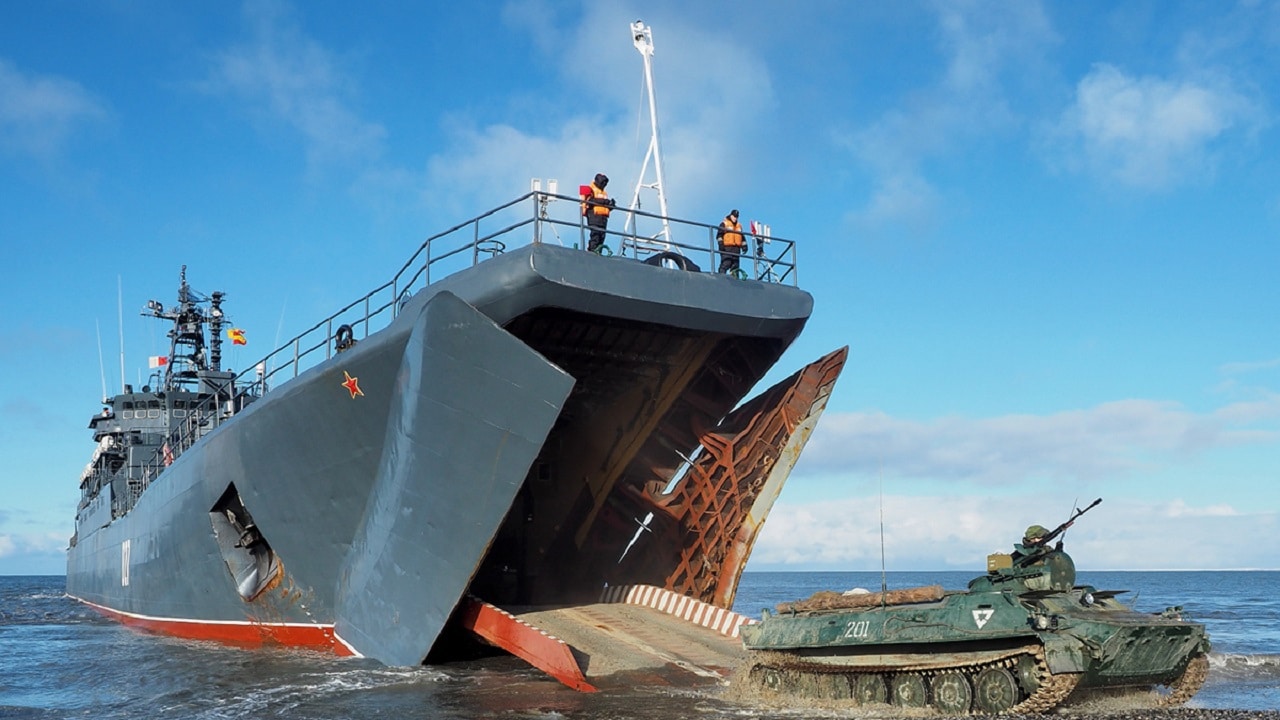 Could a Russian Amphibious Landing Overwhelm Ukraine? – At least six Russian amphibious landing ships that can carry an impressive number of troops and armor have been spotted in the Black Sea. This is a deployment that would put Ukrainian coastal cities such as Odessa in jeopardy. Military personnel and civilians in Odessa have been prepping for a decisive Russian naval assault since the war began. These ships, and other Russian naval vessels, can also serve as a blockade against the Ukrainians to keep them from importing and exporting goods – a substantial part of Ukraine’s economy.

Amphibious Ships Take a Long Journey to the Black Sea

Three Ropucha-class amphibious assault ships were spotted last month – the Minsk, Kaliningrad, and Korolev. They were sailing from the Mediterranean through the Dardanelles, the Sea of Marmara, and then the Bosphorus Strait to eventually reach the southern coast of Ukraine in the Black Sea. Two more Ropucha-class ships are expected to join the flotilla in the Black Sea along with one more amphibious landing ship, Pyotr Morgunov, from the Ivan Gren-class.

Now They Are in the Combat Theater

On March 8, spotters observed the landing ships off the west coast of Crimea. Also, western media has reported that there are warships off the coast of Odessa already. Odessa, the third-largest city in Ukraine with about a million people, has strategic value for the Russians and would enable the invaders to cut off Ukraine from the sea.

Inhabitants of Odessa have mined the beaches of Odessa and installed anti-ship missiles as they prep the city for an attack from Russian amphibious assault ships along the Chernomorsk and Zatoka beaches. Meanwhile, the ships still in service in the weakened Ukrainian navy do not have missiles, making the defense of Odessa more difficult.

The Ropucha-class land assault ships have a shallow draught that enables them to come close to shore. There are 28-ships in the class. They can displace 4,100 tons when fully loaded with war material. What makes the Ropucha-class valuable is their extended range of 6,100 nautical miles that enables them to travel in blue water all the way from the Baltic Sea to the Mediterranean Sea and through various choke points to attack beaches with a land assault.

The military cargo carried by the Ropucha-class is formidable. The ships can transport 10-tanks that are ready for combat and 12-infantry fighting vehicles with scores of troops. More important, the assault armor is supported by logistics vehicles on each ship so the amphibious attack can be sustained.

The Ships Are Heavily Armed

The Ropucha-class can defend from aerial attacks with 57mm autocannons. Close-in air defenses are supplemented with a Gatling-style gun. They have an additional 76mm gun for shore bombardment and the ships can also employ Grad rockets to soften the beaches before landing.

In addition to a potential amphibious assault, the Ukrainians also fear a maritime blockade that could stifle the economy. According to the World Port Source, “The facilities at the Port of Odessa have capacity to handle over 18 million tons of dry cargo and 25 million tons of liquid cargo each year. The Port of Odessa handles a wide range of cargoes including oils, condensed gas, containers, metals, ores, raw sugar, grain, paper, and perishable cargoes.” So, a blockade of Odessa could choke off needed food and raw materials.

But No Tactical Surprise to Ukraine

One problem with the Russians’ plan is that they have lost the element of surprise. Odessa is ready for an attack. The Ukrainians have already claimed to have damaged, or even completely destroyed a Russian patrol vessel with an anti-ship rocket attack. They know which beaches the Russians are likely to hit and they have anti-tank mines emplaced to stymie a potential assault on its shores. The Russians have been forced to wait for land forces to encroach on Odessa and this main effort to take the city has been slow-going for the invaders.

Odessa residents along with territorial guards and regular army Ukrainian troops are willing to fight to the death to protect their city and Russia’s naval infantry will likely face a bloody fight on the beaches and in street-to-street fighting should the amphibious landing commence.