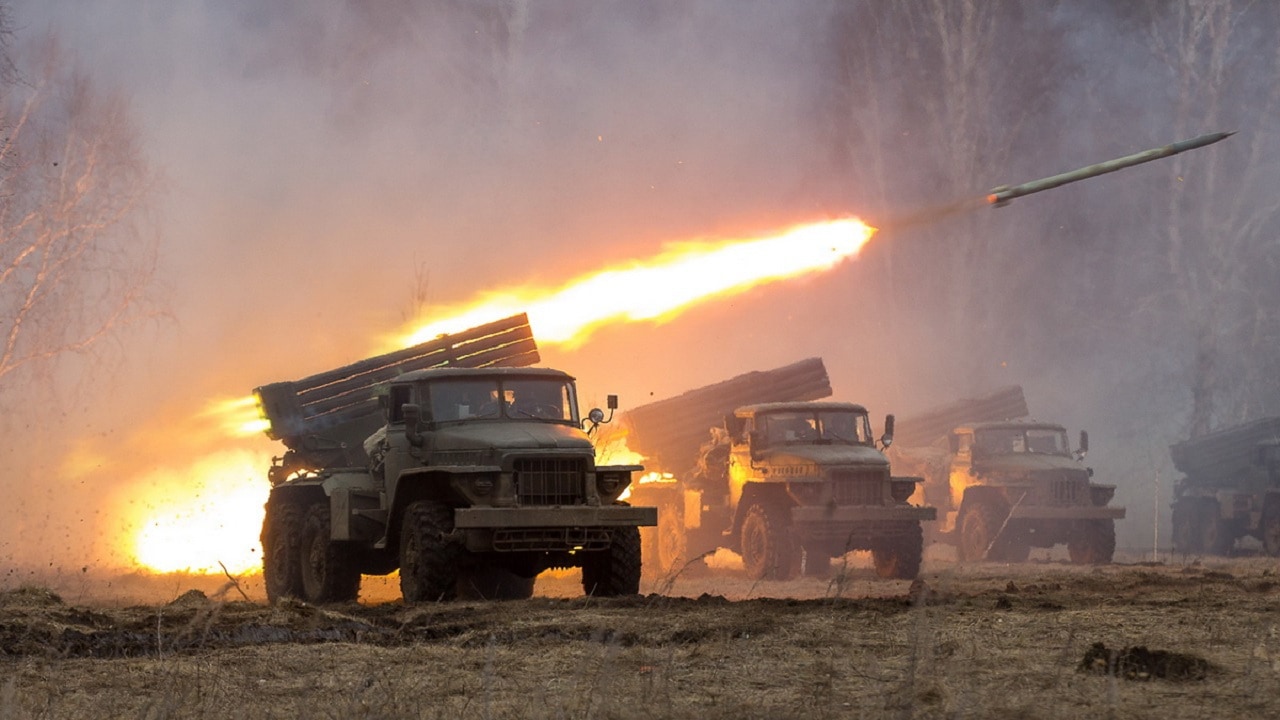 Russian Grad Rockets Rain Down Death and Destruction – They are old, crude, and basic, but Russian BM-21 Grad rockets are still carpet-bombing Ukrainian combatants and punishing people in cities. Grad means “hail” in Russian, and the Grad rockets come down in bunches. The Grad can fire 40 rockets in less than 20 seconds. The Grad multiple-launchers have been used in many cities across Ukraine against military and civilian targets.

Civilians have panicked and remained hidden in the basements of their homes and businesses to survive Grad attacks. The rocket warheads are not precision-guided, so this weapon is used by the Russians for indiscriminate and deadly bombardment on a daily basis – the Russian way of war in Ukraine.

History of the Grad

The Grad history goes back to their original development based on what the Soviets called the great patriotic war against German invaders. The Grad has since proliferated to many militaries around the world. Around 30-countries deploy it. It was a relative of the BM-13 Katyusha 132mm multiple-launch rocket system from World War Two that taught the Germans a daily lesson – reminding them that attacking the Soviet Union was futile. The Katyusha dished out so much punishment it was nicknamed “Stalin’s Organ” by the Wehrmacht.

By 1952, the Soviets had created the improved 140mm BM-14 system that the USSR figured would create massive casualties during a war with the United States. In 1960, the Russians stumbled upon what seemed to be an obvious improvement – fire the rockets out of individual tubes instead of a group of rails. This helped with velocity, range, and firepower. The system now had a rangier 6X6 truck for better mobility and ability to fire 40-rockets per salvo.

Human rights organizations are concerned about the Grad and other Russian rocket-launch systems because the warheads can spread cluster munitions against civilians. Grad warheads can also carry incendiary and even chemical weapons – something that would shock the international community even further if deployed.

Quick to Shoot and Scoot

The Russians have used the Grad against tanks, lightly-armored vehicles, airfields, command and control centers, and radar stations. This is a quick-reaction system as it only takes three minutes to prep for firing. The 6X6 truck can swiftly move to another firing position after launching a salvo. Then a new round of rockets can be loaded in ten minutes. Support trucks carry more rockets for re-supply.

Grad missile attacks have killed dozens and wounded hundreds of civilians in Ukraine. Just one attack killed 15 non-combatants in Donetsk during the early part of the war.

“It’s mainly used on enemy troops before an offensive. Used against civilians, it’s not only a war crime but has only one purpose – to spread terror and alarm among the civilian population,” according to Britain’s Daily Mail.

Ukrainians Use the Grad Too

To make the battlefield even more deadly, Ukrainians also have numerous Grad systems, which shows that this war is being fought in a stand-off manner with indiscriminate use of deadly rockets and missiles.

There have been efforts to convince the Russians to conduct cease-fires to allow civilians to escape cities under bombardment by using humanitarian corridors. My concern is that there are so many Russian multiple-launch rockets systems that the word to hold fire may not make it all the way down to the individual battery that is deployed in different regions and cities in the country. The batteries may continue to fire even though high command calls for a cease-fire. This makes the Grad even more dangerous to civilians as rocket bombardments continue to attack schools and hospitals, even though there may be open humanitarian corridors for escape.