Does Ukraine Have Stand-off Strike Capabilities to Counter Russia’s Missiles and Artillery?: There is a significant possibility that the buildup of Russian forces around Ukraine may herald a new invasion in the coming days and weeks. One especially notable aspect of Ukraine’s vulnerability to Russia concerns the latter’s standoff-range missiles and artillery capabilities.

Ukraine’s air defenses may intercept some of the incoming missiles, but themselves will likely become embroiled in a desperate fight for survival against air-defense suppression attacks.

At the tactical level, Russia’s non-contact warfare doctrine seeks to leverage drone spotters and electronic warfare to locate enemy forces for destruction at standoff distances using artillery without exposing tanks and infantry to direct fire until the opposition is shattered.

That means for Ukraine to hold out against a Russian attack, it too must be able to inflict attrition with its own long-distance fires to degrade and disrupt enemy artillery and inflict attrition on forces positioned outside direct fire range.

Modern counter-battery radars make it possible to determine the origin point of enemy artillery fires and rapidly launch accurate counterstrikes to silence them. In a war of artillery duels, the ability to promptly unleash a large volume of fire and then scoot away in just a few minutes to avoid the counterbattery strike is essential.

Recognizing Ukraine desperately needed more assets to neutralize Russian artillery, the U.S. reportedly donated to Ukraine from 2015-2019 thirteen AN/TPQ-36 Firefinder and 20 newer AN/TQP-53 Quick Reaction counterbattery radars. The latter can detect rockets out to 37 miles (60 km) away, and shells, 21 miles away (36 km) while scanning across a 90 degree arc, or out to shorter distance in 180 degree scan modes.

These radars arguably did more to enable Ukrainian forces than higher-profile donations of Javelin anti-tank missiles. Reportedly, Ukrainian units overwatched by these radars had casualty rates decrease from 47% to 18%.

Ukraine also is producing indigenous Zoopark-2 and Zoopark-3 counter-battery radars as well as Polozhennya-2 acoustic counterbattery systems. Coming in the towed 1L220UK and self-propelled 1L221E models, these can reportedly detect shells 14 miles away, rockets at around 22 miles, and ballistic missiles at 50 miles.

Ukraine and Russia mostly field the same Soviet-era systems, which can furthermore use Rocket-Assisted Projectiles (RAP) to boost range, though Russia’s have generally received a greater degree of modernization.

But larger, long-range guns and rockets that may generate lower volumes of fire over time than lighter ones, are well-suited for striking other artillery beyond the reach of retaliation.

Looking further ahead, Ukraine has successfully tested an indigenous 6×6 truck-mounted 2S22 Bohdana 155-millimeter howitzer with a range of 26 miles, or 31 miles using RAP. Kyiv is also due to receive 26 peculiar-looking Czech DANA-M2 wheeled self-propelled howitzers with a range of 16 miles.

Rocket artillery (all truck-mounted) is suitable for unleashing high-volume fires over a broad area in a very short time, with larger rockets having the potential to conduct operational-depth strikes.

Clearly, Ukraine has a considerable mass in artillery, though it could have to survive under pressure from the even greater mass of Russia’s military. Unlike Ukraine’s shorter-range artillery, its long-range fires gun predominantly are towed weapons that are difficult to rapidly redeploy after firing to avoid counterstrikes and leave crew more exposed to shrapnel. You can see this risk chillingly (but non-fatally) illustrated in the video below.

The Ukrainian military’s primary deep-strike capability comes from its arsenal of 90 Tochka-U (NATO codename SS-21 Scarab-B) tactical ballistic missiles, mounted on a 6×6 truck. These have a range of 120 kilometers (75 miles). More accurate than its predecessors, the Tochka-U is still not exactly precise, landing on average within 95 meters (ie. a football field length) of a designated target. 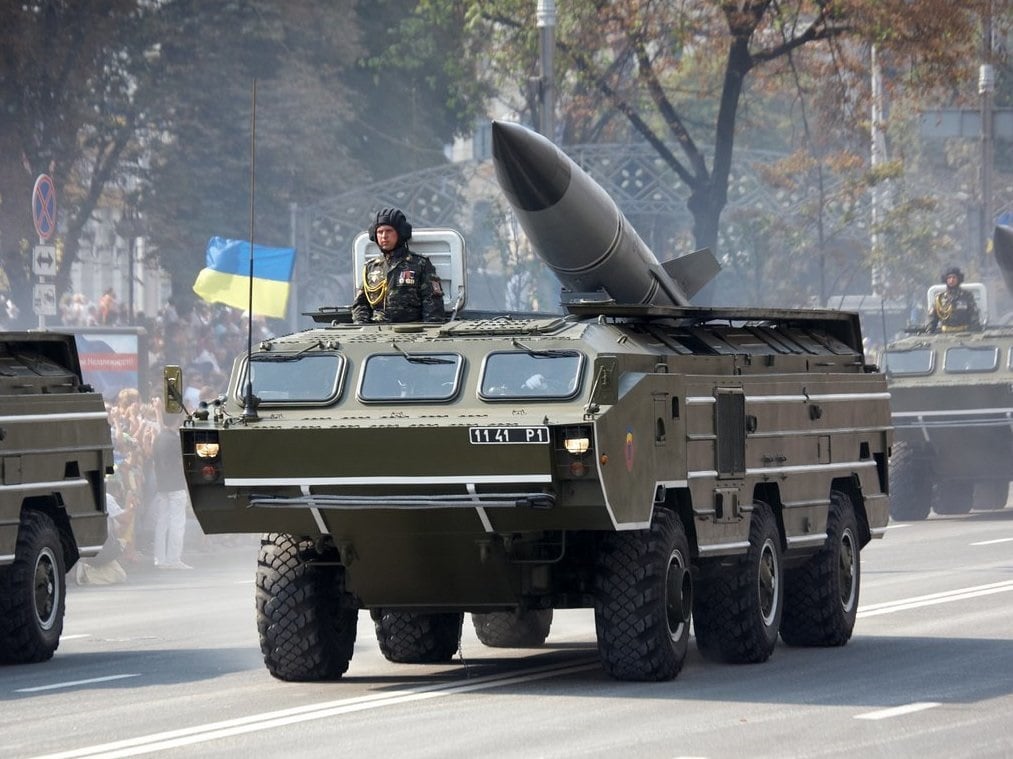 Ukrainian OTR-21 Tochka TELs during the Independence Day parade in Kyiv, Ukraine in 2008.

That could still pose a lethal threat against large buildings/facilities densely packed with personnel and equipment. In 2015-2016, just three successful Tochka strikes carried out by Houthi rebels killed 300-400 personnel from a Saudi-led military coalition and destroyed dozens of vehicles, including a main battle tank and Apache helicopters.

Missile forces might attempt to target airbases across the border hosting Su-24M, Su-25, and Su-30 jets such as Millerovo, Kursk, and Promorsko-Akhtarsk; or in Crimea at Saki and Simferopol. However, that would require positioning the systems very close to the border/frontline, with a high risk of detection and destruction.

Long-range missiles and rockets also have a history of being used (unethically, in the author’s view) targeting population centers in the hopes of creating political pressure to end hostilities. Such attempts, made during the 2020 Nagorno-Karabakh conflict, the ‘War of the Cities’ during the Iran-Iraq War, and Hitler’s V-1 and V-2 missile bombardment of the United Kingdom generally backfired by increasing resolve and motivating escalation.

Ukraine’s Navy is due to activate its first battery of R-360 Neptune truck-mounted anti-ship cruise missiles in April which could impose significant risk on any Russian attempt to use the tank landing ships (LSTs) it has massed in the Black Sea for an amphibious landing operation on Ukraine’s coast.

If provided timely targeting data from maritime surveillance assets, the radar-guided missiles could even threaten warships up to 180 miles out into the Black Sea, with range potentially increasing to 310 miles. The Neptune could also be used for land-attack missions relying on inertial navigations systems for guidance. Ukraine plans to deploy three batteries by 2025s, each with six truck launchers and 72 missiles ready to fire.

Ukraine also has developed a 300-millimeter Vilkha (“Alder”) rocket-artillery evolved from the Russian BM-30 Smerch, including an extend-range Vilkha-M variant that can reach 75 miles (120 km). Each truck can carry twelve missiles it can launch in under a minute, then after firing redeploy in just three minutes. Even longer ranger R-224M-series rockets using improved propellants under development allegedly could boost range to 95 or even 124 miles. Curiously, Ukraine is also developing a surface-to-air missile variant of Alder fitting S-125 radar seekers to the Alder’s rocket.

Like the precision M31 GMLRS rockets used successfully by the U.S. Army against ISIS, the Vilkha’s P624 rockets use both INS and GPS guidance and movable maneuvering fins and pulses from 90 tiny side-firing rockets to land on average within just 10-30 meters of a designated target depending on range, compared to the Smerch’s 120-200 meter dispersion.

Overall, the Vilkha-M rockets could provide more accurate and longer-range operational-depth strikes than the Tochka can. The system has completed development and been tested, with at least around 100 rockets procured, which are allegedly compatible with Smercha’s launchers is unclear. How many, if any, of the Vilkha’s 8×8 launcher vehicles have been delivered is also unclear.

In the mid-term, Ukraine has plans to domestically deploy a longer-range ballistic missile system in a similar class to the Iskander, variously called the Grom-2, Hrim-2 (“Thunder”) or Sapsan (Peregrine) deployed on a 10×10 transport-erector-launcher truck.

This has proceeded fitfully through development backed by Saudi financing, as Riyadh plans to order a 280-kilometer range export variant called the Ra’ad-2. The Ukrainian model is to have a 500-kilometer (310 miles) maximum range, though initial production may fall under that.

Mounted on a 10×10 chassis, the Grom-2 would mate a powerful 1,100-pound warhead to multiple seeker warheads (infrared, radar, electro-optical, and combined IR/radar) for guidance. Like Russia’s Iskander, it would be capable of evasive maneuvers to avoid air defense.

It’s debatable whether much of the Ukrainian Air Force would survive the massive bombardment that would ensue in a Russian attack. However, if its aircraft are dispersed so that enough survive the first strike, Kyiv might attempt to use its swing-swing Su-24M ‘Fencer’ supersonic bombers and Su-27S Flanker fighters to conduct operational-depth strikes, though at grave risk of loss.

A military can only attack targets deep behind if it can “see” deep behind the frontlines. To be fair, that’s a problem when targeting large, static facilities, but time-sensitive targets of opportunity require roving eyes.

One method at Ukraine’s disposal is to use its newly acquired armed Bayraktar TB2 drones to spot targets for missile and artillery strikes. In a 2020 war with Armenia, Azerbaijani TB2s inflicted extensive damage on Armenian forces—not just using small laser-guided missiles, but in many cases by acquiring targets for artillery strikes. Of course, that role can also be undertaken by other surveillance drones in Ukrainian service besides Bayraktars.

That said, Russia has many more effective means than Armenia had to counter drones, whether shooting them down, destroying them on the ground, or disabling them with electronic warfare, so how long Ukraine’s drone would survive is debatable.

Russia and Ukraine: If War Comes, Watch the Missiles and Artillery

Overall Ukraine has substantive counter-battery assets, but its capacity for effective strikes at operational depths is limited. Such offensive weapons are politically sensitive for Ukraine’s foreign allies to donate, meaning Ukraine must develop and procure from its military-industrial base.

However, Kyiv may indeed begin fielding its home-grown deep strike weapons in the next few years, greatly improving Ukraine’s ability for retaliatory attacks. Some analysts even argue Russia’s urgent buildup today is motivated in part by the fear that once those capabilities are operational, Moscow’s ability to wage war at an acceptable cost would be degraded.