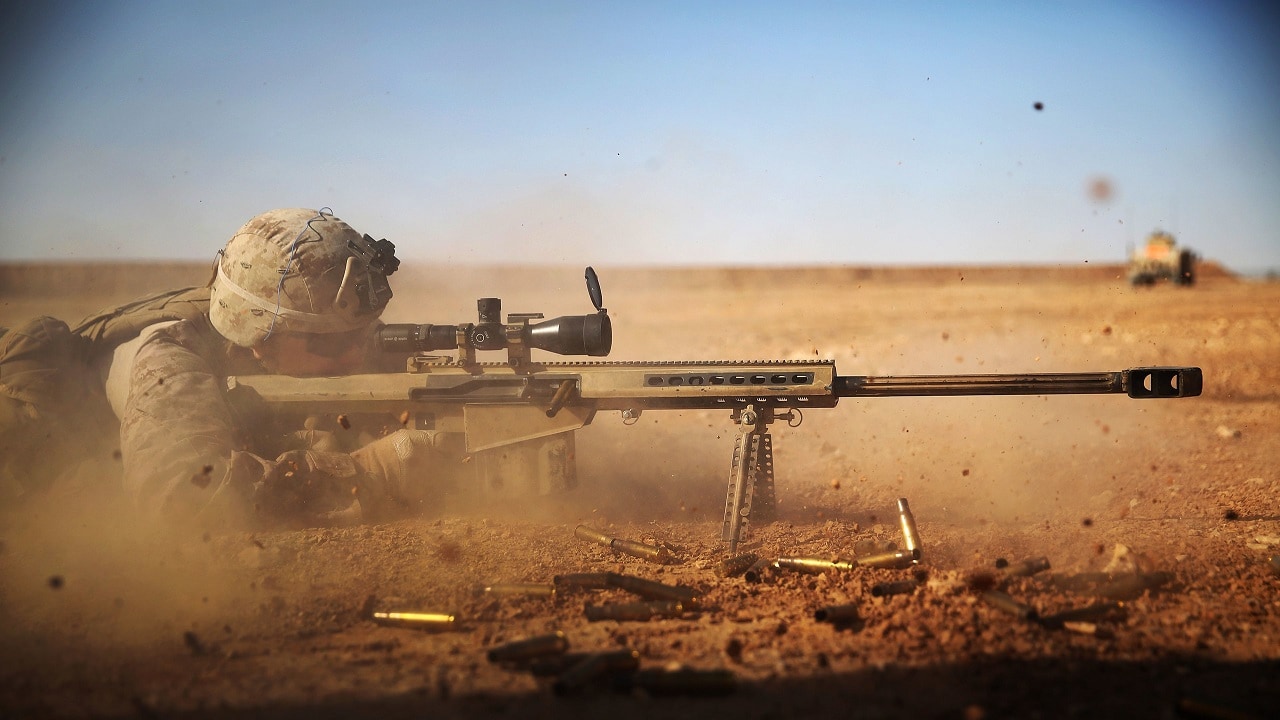 The Ukrainian Army Needs More Sniper Rifles – In a new interview with 1945, a military analyst who has been to the Ukrainian battlefields numerous times discussed the state of Ukrainian small arms. Currently, the besieged fighters are depending on the aging Dragunov sniper rifle, but they want more powerful Barrett .50 caliber guns to better engage the enemy, according to Dr. Phillip Karber. Now is the time for NATO and Western partners to ship more sniper rifles to friendly forces.

Get the Barrett Sniper Rifle to the Front Pronto

Karber, who heads up the think tank Potomac Foundation, said “The one U.S. small arm that the Ukrainians love and can’t get enough of is the .50 caliber Barrett rifles (all models) along with tons of ammo. The more Barretts they get, the more miserable the Russians will be.”

Sharpshooters Will Play a Major Role

More bloody urban combat is expected, and the Ukrainians will be forced to depend further on sharpshooters who can take out dismounted Russian infantry troops who are assaulting Ukrainian suburbs and cities. AK-47s and AK-74s will not be enough. If Kyiv should happen to fall, the Ukrainians will also likely conduct an insurgency and snipers will have a major role to play in a desperate fight to attrit the invaders and defend the motherland after the initial conventional stage of the war.

Dragunov Is Getting Old

The Dragunov sniper rifle was first produced in the Soviet Union in 1963. The Soviets called it the SVD, or snayperskaya vintovka dragunova. It was believed to have been used by North Vietnamese Army snipers during the Vietnam war. Soviets also depended on it during the war in Afghanistan.

Not Bolt-Action, But Semi-Automatic, Which Was Innovative at the Time

The Dragunov is “gas-operated with a short-stroke piston system with a rotating bolt,” according to Tactical-Life. The rifle weighs just under ten pounds and it’s well-balanced with minimized recoil. The Dragunov is chambered in the 7.62x54R round which was shot by Russian snipers in World War Two. This is a semi-automatic rifle with a 10-round magazine. The rifle was ahead of its time since most armies were using bolt action sniper rifles when the Dragunov first entered service.

More of a Sharpshooting Weapon than a Full-fledged Sniper Rifle

Only accurate out to 600 to 800 meters, it doesn’t have the long-range of a bona fide sniper rifle and it is actually more of a “dedicated marksman” rifle for squads who needed a long gun to supplement AK-47s and AK-74s. But like the AK-47, it is straightforward to disassemble and clean as it deals well with dust and carbon build-up.

How About a Barrett?

While the Dragunov is tried and true in combat, the Ukrainians need something with long-range and more power. As Karber said, they are looking to acquire more Barrett .50 caliber anti-area sniper rifles. The Barrett M82 can shoot through an engine block on a vehicle at over 1,500 meters, so it has immense stopping power and penetration.

Unique Action to Chamber a Round

This rifle also has a five or ten-round magazine, and it works by its rifle-barrel recoiling backward after firing. The recoil releases energy that pushes back the rotating long-breech block and cycles the action. It has a muzzle velocity of 2,799 feet per second. The M82 distinguished itself during Operation Desert Storm and was utilized in ensuing actions in Iraq and Afghanistan during the war on terror.

Put the Barrett to Good Use

The Ukrainians can use it for eliminating enemy personnel driving vehicles and even to shoot at targets such as buildings that house radar and command and control units.

The fight in Ukraine is already bloody and friendly forces will need long rifles as force multipliers, especially in the urban combat that is sure to come during the conventional phase of the war. The Ukrainian army and national guard may become insurgents and sniper rifles that can eliminate as many Russian targets as possible will be a welcome addition for Ukrainian fighters.