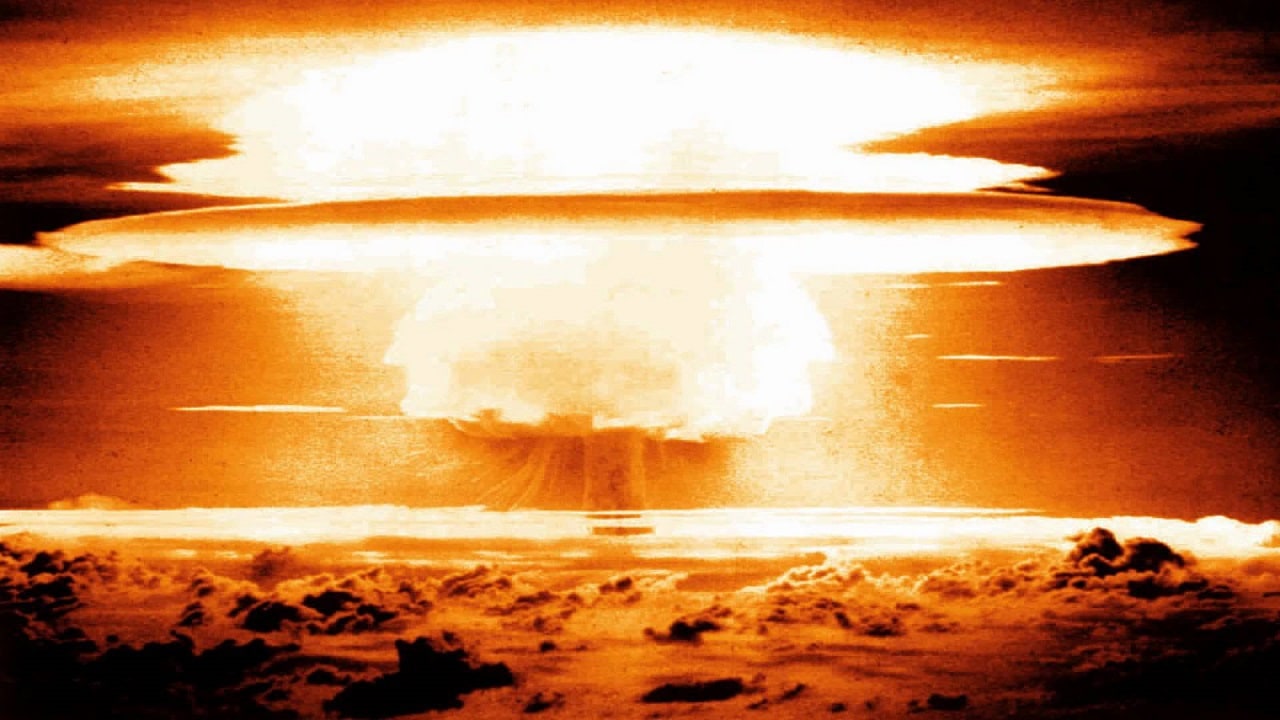 Thank god it was never built. However, Russia did come up with something nearly as nasty: Meet the Tsar Bomba: On July 10, 1961 Soviet Premier Nikita Khrushchev summoned the USSR’s top nuclear weaponeers and told them to promptly resume nuclear testing. After roughing up America’s young new President Kennedy at a Vienna summit in June, Khrushchev was in a mood, according to Andrei Sakharov, to “show the imperialists what we can do.”

For two years while their country joined the United States and the United Kingdom in a voluntary moratorium on nuclear tests, Soviet nuclear scientists, including Andrei Sakharov, the “father of the Soviet hydrogen bomb,” developed and refined new weapon concepts and designs. Now they had to deliver big results in very short order. Khrushchev wanted a political spectacle to shock and awe the West, and it had better go right.

The Communist Party’s 22nd Congress in October 1961 required something special. It isn’t clear who proposed a 100-megaton bomb—Khrushchev or the weaponeers—but at the premier’s command the most powerful nuclear weapon ever built had to be ready in only four months.

Such a huge bomb came about only because Soviet scientists had a good idea about how to proceed. As Carey Sublette of the Nuclear Weapons Archive website explains, “It is safe to assume that the 100 Mt bomb was a very conservative design – one that pushed no technical envelopes save for size. The two principal reasons for thinking this are the extremely compressed development schedule, and the very high profile of the test.”

High-profile indeed. Khrushchev’s next move came on August 13, 1961, when East Germany began erecting the Berlin Wall. On August 31 the Premier announced the giant new bomb and the abrupt end to the USSR’s voluntary moratorium; a Soviet atmospheric nuclear test followed the day after. The US responded in kind within the month.

With the Cold War escalating no time was spared. Andrei Sakharov’s team at Arzamas-16, the “USSR’s Los Alamos,” skipped the careful mathematical analysis require for H-bomb design and worked out “Big Ivan” on the fly using approximations. At the time the largest device the Soviets had tested yielded much lower, so to achieve 100 megatons Sakharov’s team used clustering and staging.

By ganging together eight or more smaller H-bombs and mating them to clusters of thermonuclear fuel capsules, a really big bomb could be built without any new technology. The resulting weapon was enormous, an unsophisticated kludge but a robust one. It had to be—failure was not an option.

It even looked like a bomb was supposed to—just much, much bigger. Like Russia’s gigantic Tsar Bell and Tsar Cannon, this would be the Tsar Bomb.

Multi-megaton thermonuclear weapons rely on staging. A first-stage fission device generates the heat, pressure and radiation to ignite nuclear fusion in a second-stage fuel vessel, and the more fusion fuel, the bigger the reaction. A third stage can be added by cladding the second stage in weapons-grade uranium metal—the fusion reaction induces nuclear fission in the uranium cladding and adds many megatons of yield. All-up three-stage thermonuclear weapons can be very dirty bombs, with more than half their power coming from fission—resulting in vast amounts of fallout.

The gigantic weapon—over 26 feet long, nearly seven feet in diameter and 27 tons mass—was designed, engineered and fabricated all at once. Assembly and component testing took place inside a workshop constructed over a railroad flatcar. When it was ready a locomotive towed it to the airfield for loading into a specially-modified Tupolev Tu-95N “Bear A” bomber.

Painted a special white reflective white to reduce flash damage from the explosion, the big Tu-95N turboprop bomber was still too small to carry Big Ivan internally. Its bomb bay doors were removed and sections of fuselage cut away to mount the bomb halfway inside the plane, like a giant engorged remora.

For the delivery aircraft to get away from the blast safely the bomb’s fall had to be slowed; slowing a boxcar-sized object full of uranium and steel from aviation speeds required a parachute of imperial scale. Big Ivan’s drag chute consumed most of the USSR’s nylon output for 1961, leaving New Soviet Women to grumble about hosiery as one more thing the workers’ paradise lacked.

On October 30, 1961, under the watchful but distant eyes of State Commission Chairman Major General Nikolai Pavlov and a host of dignitaries 600 miles away, the pregnant-looking white Tu-95N and an Tu-16 airborne lab plowed their way towards Novaya Zemlya, a large icebound island in the Arctic Ocean.

As the aircraft approached the Mityushikha Bay test range, Major Andrei Durnovtsev and his crew checked their instruments and donned heavy goggles. At 11:32 am Moscow time the Tu-95N released its weapon then climbed and banked sharply. The Tsar Bomb fell to its glory, its oddly sleek locomotive-sized mass trailing its gigantic parachute as it dropped towards ground zero.

Big Ivan detonated at 13,000 feet and its fireball still nearly reached the ground. Its own shockwave reflected off Novaya Zemlya’s surface bounced the five-mile-wide incandescent sphere skywards. Seismometers recorded a an impact equal to a magnitude 5 earthquake. Buildings were leveled 30 miles away, windowpanes broken 500 miles distant.

The flash was visible at 600 miles and the thermal pulse felt over 165 miles away. The EMP pulse blacked out radio communications for hundreds of miles for over an hour. An enormous mushroom cloud climbed over 20 miles up through the hole blown in the Earth’s atmosphere.

Ground zero was gone. “The ground surface of the island has been levelled, swept and licked so that it looks like a skating rink,” a witness reported. “The same goes for rocks. The snow has melted and their sides and edges are shiny. There is not a trace of unevenness in the ground…. Everything in this area has been swept clean, scoured, melted and blown away.”

US agencies rated the Tsar Bomba’s yield at 57 million tons of TNT equivalent—far and away a world’s record that still stands. Soviet scientists arrived at a 50-megaton yield but for decades their nation was happy to accept the higher American figure.

And yet it could have been even more powerful—a full 100 megatons. A month after the Berlin Wall went up Andrei Sakharov decided to substitute the third-stage uranium cladding for steel, reducing the bomb’s yield by 50%. As a result, for all its enormous power Big Ivan remains the “cleanest” nuclear weapon ever tested, as it derived more than half its power from nuclear fusion with far fewer radionuclides produced per megaton.

So was the Tsar Bomb really a functional weapon? Most probably not. Its military utility was questionable.

Setting aside its declared political purpose, the Tu-95N bomber—the USSR’s only way of delivering the Tsar Bomb—was not a practical delivery platform: NATO fighters would shoot the lumbering plane out of the sky long before it had a chance to drop its huge bomb. You can count on one hand the number of targets in Europe big enough to merit the Tsar Bomb’s attentions. One Tsar Bomb alone could burn down West Germany—if it could get there.

Big Ivan was a one-off, essentially a technical stunt. There are hints that the clean 50-megaton design was considered for weaponization, but nothing concrete. Curiously enough, at about the same time American nuclear weaponeers had, according to Alex Wallerstein, arrived at breakthrough high-yield bomb designs. Had atmospheric nuclear testing continued the US might have tested a 100-megaton weapon half the weight of Big Ivan—light enough to actually fight with.

Some toys are best left in their boxes. Andrei Sakharov came to think so after witnessing the Tsar Bomb’s test, and later became the Soviet Union’s leading dissident and anti-nuclear sage. That was the Tsar Bomb’s biggest effect.

Steve Weintz, a frequent contributor to many publications such as WarIsBoring, is a writer, filmmaker, artist, animator.