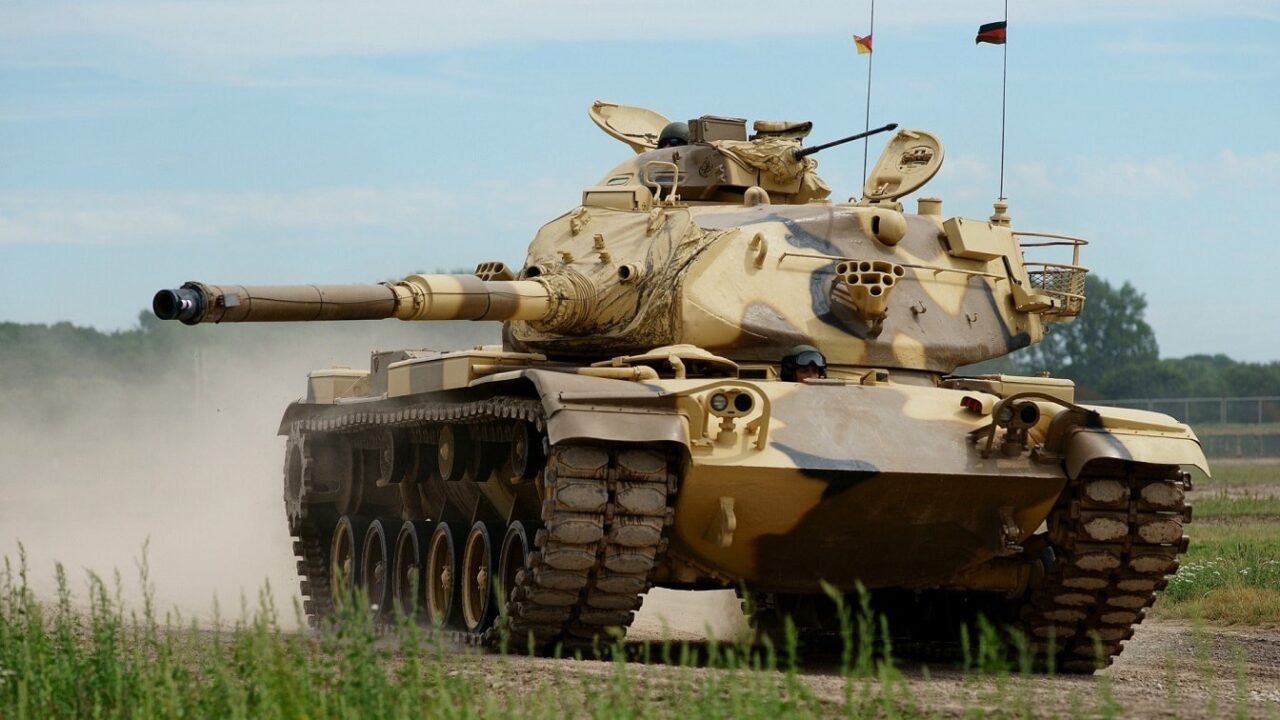 Yet fortunately for humanity, that conflict never took place. Despite numerous bloody proxy and civil wars, there were few interstate clashes between large mechanized armies. The handful of exceptions notably include the 1965 and 1971 Indo-Pakistani conflicts and the Iran-Iraq war. However, the most intense mechanized battles since World War II took place in October 1973 when Egypt and Syria launched a surprise assault on the Israeli border fortifications during the Jewish Yom Kippur holiday.

The Arab and Israeli armies were lavishly equipped with then state-of-the-art tank, jets, and missiles from the Soviet Union and West respectively, including new types of weapons that would see their first major combat test. The result was a hi-tech slugging match of unprecedented scale and tempo.

The war was conceived by Egyptian President Anwar Sadat and Syrian leader Hafez al-Assad to recapture the Golan Heights and Sinai, which had been seized by Israeli forces in the humiliating Six Day War. The wide-open deserts of the Middle East heavily favored armor and air power, and the IDF’s tank and fighter units had significantly outperformed their adversaries.

Syria and Egypt sought to improve their officer corps and imported large quantities of modern Soviet weapons, as well as advisors to instruct in their use—though, by 1973, Egypt was already courting Washington’s favor at the expense of Moscow’s. Sadat also waged a ‘War of Attrition’ attempting to wear down IDF border positions with shelling and air attacks. However, the Israelis dealt back more punishment than they received, and Sadat acceded to a ceasefire on August 1970.

Israel’s defensive strategy during the Six Day War was based on launching a preemptive strike before an Arab attack. By early October 1973, Tel Aviv was aware of Arab preparations for war—including a warning delivered secretly in person by King Hussein of Jordan! But U.S. Secretary of State Henry Kissinger warned Israel not to initiate hostilities, or risk losing U.S. support. At an 8 AM meeting on October 6, Israeli Prime Minister Golda Meir considered launching a preemptive strike—and decided against.

Six hours later, over 2,000 Egyptian howitzers, siege mortars, and rocket launchers unleashed a titanic barrage on the Israeli fortifications of the Bar Lev Line on the east bank of the Suez Canal. Overhead, 200 MiG and Sukhoi jets roared over the frontline to plaster Israeli airbases, artillery batteries and command posts.

Egyptian troops used flamethrowers and rocket-propelled grenades to clear out several of the concrete Israeli outposts, and by 6 PM had secured a two-mile-deep bridgehead. Once the crossing was secured, engineers began erecting pontoon bridges to allow tanks and the first of over 200,000 Egyptian troops. Special pumps were rafted over and used to blast paths through huge obstructing sand embankments built by Israeli engineers.

IDF armored units deployed in reserve rolled forth to counterattack. IDF tanks expected the Arab infantry to be vulnerable, with their heavy weapons still on the western bank, and charged into the fray without artillery or infantry support.

However, Egyptian troops had crossed with an extra-large supply of portable Malyutka (AT-3 Sagger) wire-guided anti-tank missiles. While an RPG remains accurate only up to one to two hundred meters, the Soviet-supplied Malyutka were effective up to two miles away. The AT-3 teams planted their portable launch units on the ground, then took cover nearby and remotely fired the projectile towards the approaching tanks. The missiles remained connected by a huge spool of wire to the launcher, and their operators used a joystick interface to guide the weapons on target manually.

As the Israeli Patton tanks barreled onwards, Malyutkas began sailing towards them at a fast 380 feet per second, their shaped charge warheads easily blasting through armor despite their low velocity. Over 100 Israeli tanks were lost on the first day alone. Two days later, Egyptian signals intelligence intercepted plans for a counterattack by the 162nd Armored Divisions. General Hassan Abu Sa’ada orchestrated an ambush that knocked out 75 tanks in a matter of hours.

Surely, the formidable Israeli Air Force could fly into the rescue? Fly in it did—only to encounter a barrage of surface-to-air missiles. Before the war, Egyptians had relentlessly construed a long string of air defense radars and potent S-125 and mobile 2K12 (SA-6) surface-to-air missiles on the western bank of the canal. Though Israeli forces had hammered the batteries during the War of Attrition, the Egyptians finally completed a deadly integrated air defense system following the ceasefire.

As Israeli F-4 Phantoms and A-4 Skyhawks winged towards the frontline, SA-6 missiles began plucking them from the sky—leading to the loss of 34 Skyhawks in the first four days of the war. Initial attempts to take the SAMs out backfired disastrously, with six Phantoms lost in one failed strike.

Last Stand on the Golan Heights

At the same hour as the Egyptian assault, no less than 800 Syrian tanks supported by 188 artillery batteries and 28,000 troops stormed towards the Israeli fortifications on the Golan Heights. The IDF had only two tank units facing them, the 188th Barak and 7th Armored Brigades with 180 Centurion tanks between them, supported by a paratrooper brigade and eleven artillery batteries.

The two brigades needed to hold out for two days against these impossible odds before reserve armor and artillery unit could relieve them. The IDF’s Centurion tanks—later joined by M48 Patton, and even M4 Shermans from World War II, upgraded with powerful 105-millimeter L7 guns—were mostly equally matched with the Soviet T-55 and T-62 tanks barreling towards them, benefiting only from a modestly better fire control, and ramp-like earthworks for cover. The Syrians also mustered new BMP-1s, highly mobile troop transports sporting tank-busting Malyutka missiles and short-range 73-millimeter guns.

However, IDF tankers were vastly better trained and led, while Syrian forces suffered massive communication and coordination problems. Small numbers of Israeli tanks picked off dozens of Syrian T-55s and T-62s, which struggled to spot the source of incoming fire. On several occasions, fire from a lone Israeli tank caused Syrian commanders to halt promising attacks.

Still, the Syrian numerical advantage ground down the Israeli defenders. While the 7th Brigade successfully held the Quneitra gap to the north, the 188th, defending flatter ground to the south, was virtually wiped out in twenty-four hours, its commanders killed and only five tanks left operational by the end of the fighting. While Syrian armor broke through, commandos deployed by helicopter captured a critical Israeli intelligence outpost 2,000 meters above sea level on Mount Hebron.

By October 8th, however, IDF reserves were already pouring into the Golan front and swiftly began driving the Syrian troops back. Desperately, the Syrians unleashed FROG-7 rockets on military and civilian targets in Israel. In retaliation, Israeli Phantom jets blew up the Syrian Army General Staff Headquarters in Damascus—causing Assad to pull back air defense units from the frontline, leaving his troops exposed to Israeli airpower. By the 10th the IDF tanks were rolling towards Damascus. Only the intervention of two Iraqi armored divisions and Jordanian brigades slowed down the IDF’s advance.

Egyptian forces were initially content to sit on the recaptured Sinai—but the Syrian collapse prompted the Egyptian 2nd and 3rd Armies to finally launch an armored thrust beyond the umbrella of their anti-tank teams and fixed air defense missiles on October 14.

By then, Israeli General Ariel Sharon had revised tactics, making sure tanks were support by artillery and infantry to suppress anti-tank missiles. Israeli armor smashed the attack, knocking out 250 tanks for just six lost Israeli tanks and 34 damaged. Immediately, Sharon riposted with an assault that broke through the northern flank of the Suez bridgehead.

By then, Arab nations were pressuring the Western world through an oil embargo. Washington and Moscow were actively resupplying the opposing sides—and inching dangerously close to war. Both superpowers convened in the UN and hastily imposed a ceasefire on October 22. Minutes before it came into effect, Soviet technicians unleashed three Egyptian Scud missiles on Israeli positions, killing seven—the weapon’s first operational test.

The ceasefire almost immediately broke down, and the IDF resumed its advance, threatening Cairo and leaving the Egyptian 3rd Army trapped on the eastern side of the canal. Aware of the army’s precarious situation due to intel from Blackbird spy planes, Henry Kissinger pressured Golda Meir into agreeing to a second ceasefire in a bid to salvage Egyptian pride and secure Cairo’s future good will. This second ceasefire on October 25 stuck despite a flurry of initial violations.

By then, the IDF had advanced within 25 miles of Damascus and was bombarding it with M107 self-propelled artillery. The ceasefire narrowly averted a planned all-out Syrian counter-attack using newly imported Soviet tanks, though sporadic fighting would continue in Golan through 1974.

The Yom Kippur war resulted in the death of 2,500 to 2,700 Israelis and an estimated ten to 16,000 Arab soldiers—and wounded over twice that number. The IDF lost roughly 1,000 tanks destroyed or temporarily knocked out and 102 jets, while Arab forces lost 2,400 armored vehicles and over 400 hundred aircraft. The IDF would later recover 400 knocked-out T-55 and T-62 tanks for IDF service.

At the time, the Yom Kippur war highlighted how long-range anti-tank and anti-aircraft missiles would reshape modern battlefields, proving that tank and aviation units needed to adapt to new tactics and technology. The extraordinary pace at which the conflict consumed men and material would be even greater today in an era of longer-range missiles, more powerful networked sensors and far more precision-guided weapons. However, the war also showed that tactical prowess and sound operational leadership could result in lopsided loss-ratios between forces of similar technical capability.

Despite its losses, Egypt emerged from the conflict energized by the sentiment that its honor had been restored by the initial recapture of the Suez canal. Five years later, Sadat would effectively bring an end to three decades of bloody Egyptian-Israeli conflicts with the Camp David Accords—which handed a demilitarized canal zone back to Egypt and cemented long-lasting ties between Cairo and Washington. Tel Aviv and Damascus, however, never reconciled and remain locked in proxy conflicts to this day.