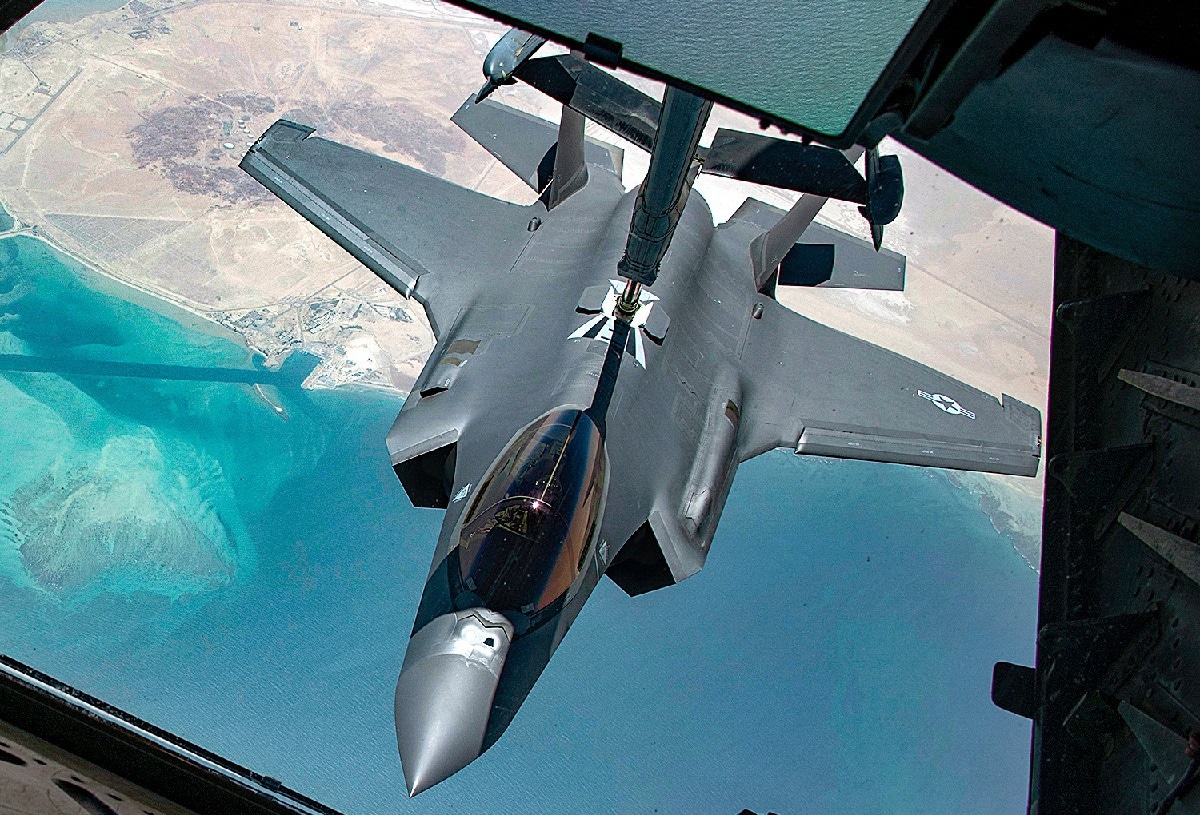 A 34th Expeditionary Fighter Squadron F-35 Lighting II conducts an inflight refueling with a 908th Expeditionary Air Refueling Squadron KC-10 Extender in the skies above the United Arab Emirates, May 8, 2020. The F-35A is the U.S. Air Force’s latest fifth-generation fighter. It has an enhanced capability to survive in the advanced threat environment in which it was designed to operate. With its aerodynamic performance and advanced integrated avionics, the F-35A provides next-generation stealth, enhanced situational awareness, and reduced vulnerability for the United States and allied nations. (U.S. Air Force photo by Tech. Sgt. Kat Justen)

Last week, Russian Federation President Vladimir Putin said that the incident involving the Royal Navy destroyer HMS Defender in the Black Sea could have triggered a global conflict, and it would have resulted in a war that the West knows it couldn’t win. Russia’s close encounter with the British warship, which was quickly followed by another incident involving a Dutch Navy vessel, came shortly before the annual Sea Breeze drills began in the Black Sea. This year’s installment of the naval exercises, which is being led by the United States and Ukraine, involved participants from around the world.

As previously reported, the Black Sea has been a military flashpoint for centuries as region powers competed to control the waters. This began with Imperial Russia’s desire to establish a “warm-water” port during the reign of Empress Catherine the Great, and continued through the successive Russo-Turkish Wars. In fact, the last time that Great Britain along with France engaged in a full-blown armed conflict with Russia – apart from the Allied deployment of anti-communist forces during the Russian Civil War – was during the Crimean War in the 1850s.

Who Are the Provocateurs?

There certainly has been some finger-pointing in recent weeks, and on Tuesday, Russian Deputy Foreign Minister Sergey Ryabkov told Russia’s International Affairs that the Western provocation further risks the chances of escalation – referring to the British and Dutch warships, which officials from each of the NATO nations maintain were sailing in international waters when they were confronted by Russian forces.

“They would be better off leaving their provocations aside next time and staying away from that area because they will get clocked in the nose,” Ryabkov stated.

However, it is unlikely the United States and its NATO allies will step away from the Black Sea, in part because three members of the alliance as well as five NATO partners – Bulgaria, Romania and Turkey as well as Armenia, Azerbaijan, Georgia, Moldova and Ukraine – are located in the region. Additionally, many important oil and gas pipelines, as well as fiber optic cables, crisscross the sea.

This further highlights the U.S. commitment to the currently ongoing Sea Breeze 2021 exercises (SB21), which is scheduled to conclude on Saturday.

Commander Daniel Marzluff, the U.S. Sixth Fleet’s Black Sea Region Engagement Lead, told Newsweek earlier this week that the Sea Breeze drills were “essential” in deterring Russian aggression and asserting U.S. and NATO backing for Ukraine, which remains at war with Moscow-backed separatists in the east of the country.

“This is clearly the most effective way to bring a unified front to this kind of rogue action,” explained Marzluff. “Here in the Black Sea, we have three NATO allies that are poised and ready to respond to any type of Russian aggression.”

Russia has also been conducting its own drills and exercises in the region, including test firings of its S-400 ‘Triumf’ surface-to-air missile (SAM) system, while its bombers have also been conducting patrol flights over the neutral waters. One misstep and the Black Sea could be a battleground – one Putin warned the West it couldn’t win, stating last week, “They know they cannot win this conflict: We would be fighting for our own territory; we didn’t travel thousands of miles to get to their borders, they did.”