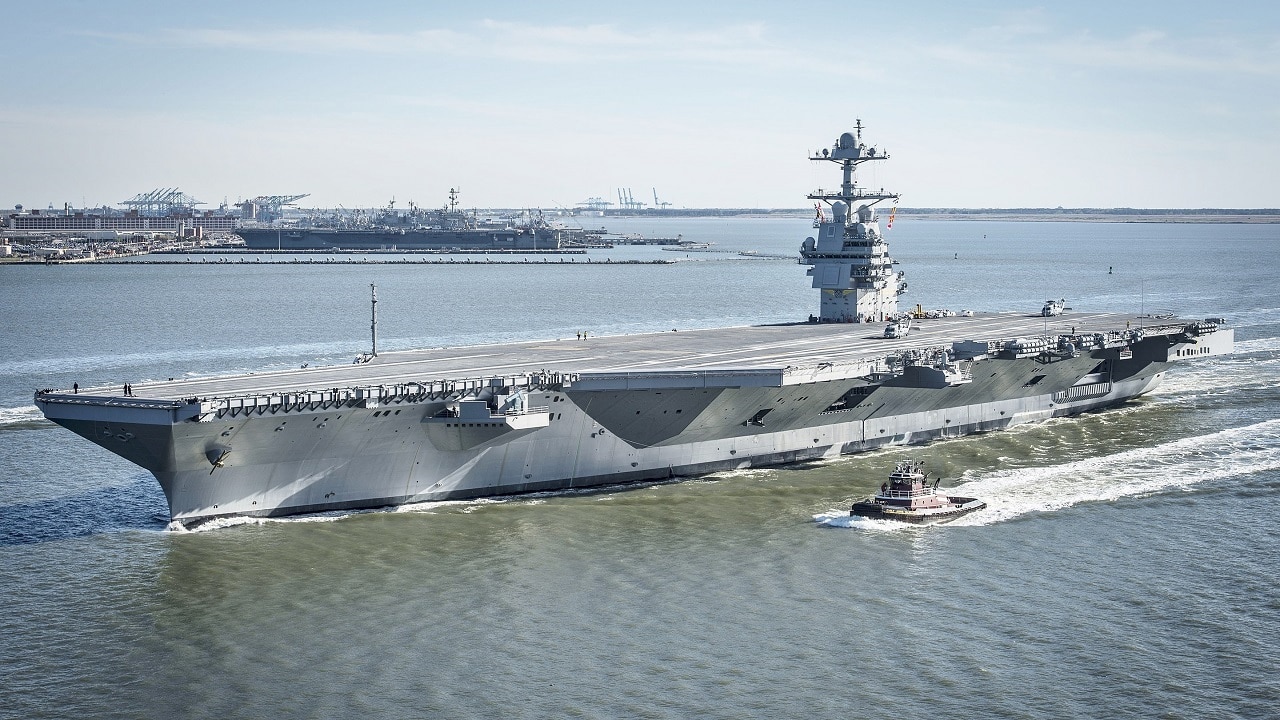 Last week, the carrier received another broadside from Trump as Navy officials revealed a major milestone for the ship, which is heading toward its first deployment later this year.

Trump’s comments emerged from a recording of a July 2021 interview published by The Atlantic on April 4.

During the hour-long conversation with Princeton professor Julian Zelizer and other scholars working on a history of Trump’s presidency, Trump spent more than four minutes revisiting his gripes about the Ford.

Trump criticized the new location of the carrier’s island, where officials command the ship and direct flight operations: “Now you’re putting the tower in the back, so it makes it very much narrow,” Trump said, “instead of putting it in the middle like you’ve had for as long as we’ve had aircraft carriers.”

Trump dismissed the Ford’s new, electromagnetically powered weapons elevators: “They want to use magnets to lift up the elevators,” Trump said. “I said magnets will not work. Give me a cup of water, throw it on the magnets, you totally short out the system. They said, ‘How did you know that?’ I said, ‘Because I know that.'”

Trump again inveighed against Ford’s aircraft catapults, which use electromagnetic power rather than steam: “I said, ‘What do you like better, steam or electric?’ ‘Steam, sir, there’s not even a contest,'” Trump said, describing a purported conversation with a catapult operator. “When this thing breaks down you have to be Albert Einstein — he used that expression — to fix it.”

The Navy has struggled to get those other systems on the Ford working, prompting billions in cost overruns, but officials say the new technology and design are improvements — the new superstructure position, for example, allows more aircraft to be staged near the forward catapults and that the electromagnetic catapults can launch more planes off the deck faster and with lower stress on the aircraft.

Trump accused Ford’s designers of having “no common sense” and said he was in the process of holding its builder, Newport News Shipbuilding, “responsible” for the delays and expense.

“So we have now an aircraft carrier that doesn’t work,” Trump told the historians. “The catapults don’t work and the elevators don’t work. Other than that, it’s a lovely ship.”

Trump’s remarks on Ford were “a jab at the experts” reflecting his belief that the “best and brightest didn’t always know what they were talking about,” Zelizer wrote.

The Navy and the shipbuilder have struggled with the 23 new technologies aboard the Ford — the service’s top officer admitted last year that putting them all into a new ship at the same time was too ambitious — but in recent months, Navy officials have emphasized what the manager of the Ford-class program called “eye-watering” progress.

Ford itself has reached initial operating capability, the minimum threshold at which the Navy can use and maintain it, the manager, Capt. Brian Metcalf, said at the Sea Air Space conference in National Harbor, Maryland, on April 5.

The carrier reached IOC on December 22, but the Navy didn’t say so at the time. “The conditions on the ship don’t really change because of IOC, so we did not make a public announcement,” Metcalf said.

IOC was declared when the last of Ford’s 11 weapons elevators was turned over to the crew. The Navy and the shipbuilder struggled with those elevators — none worked when Ford was commissioned — but all 11 are in use and the crew is “gaining proficiency” with them, Metcalf said.

“Over 17,000 individual elevator cycles have been performed by the crew in port and at sea, with weights, [and] in different sea states,” Metcalf said.

At another event during the conference, Capt. Paul Lanzilotta, Ford’s commanding officer, said the elevator design allowed ordnance to be brought to the flight deck “without interrupting flight operations.”

“You can actually park an F-18 on top of those clamshell hatches,” Lanzilotta said of the elevators. “Those advanced weapons elevators are revolutionary, I would say, not evolutionary.”

In April 2021, the Navy said it performed 8,000 aircraft launches and recoveries with the systems during the Ford’s 18-month post-delivery test and trials period.

The steam used by the older launch system “does add a bit of pageantry,” Lanzilotta said, but the Navy says EMALS, as the launch system is known, is faster and more efficient.

EMALS removes “the need for large-volume steam piping” and “can be tuned to the specific aircraft to reduce stresses on the airplane during launch,” Metcalf said, adding that EMALS and other electrical systems have replaced some “manpower-intensive steam and hydraulic systems that were significant maintenance burdens on the crew.”

Metcalf and Lanzilotta both described the island’s new location as an improvement.

Moving it toward the rear of the ship creates additional space for aircraft and allows “for smoother plane and ammunition movement on the flight deck,” Metcalf said.

Lanzilotta said there is “a whole lot more real estate forward of the island” for aircraft and that the island’s location made steering easier. “It’s nice to be able to see my stern. It’s right over my shoulder when I’m coming into dock, as opposed to more of an amidships look.”

Metcalf and Lanzilotta spoke a few weeks after Ford completed its first planned incremental availability, a six-month process that followed shock trials last summer, during which 40,000-pound explosive charges were detonated in the water near the carrier.

The Navy said Ford needed only a fraction of the repairs as the last carrier to do shock trials, and since then, it has gone through “significant modernization and maintenance and successfully completed a sea trials event early in March,” Metcalf said.

Its flight deck and aircraft launch and landing control systems have also been recertified for full operation.

Lanzilotta gave a “tip of the hat” to “the shipbuilders that built this fine ship, because I just pulled into port just a couple of days ago after being at sea for a few weeks doing our flight-deck certification, and she’s still operating beautifully.”

Navy officials have said lessons learned while building the Ford are being applied to construction of the next Ford-class carrier, John F. Kennedy, which is “about 85% complete” and “on track to deliver in 2024,” Metcalf said.

The third and fourth Ford-class carriers, Enterprise and Doris Miller, were bought in one purchase, saving about $4 billion, Metcalf said. Enterprise is about 15% done and the first cut of steel was made on the Miller in August.

“We’ve stabilized the technology. We’ve updated the construction process with the shipbuilder, and we’ve been able to deliver and set up with the two-ship buy a repeatable process for acquiring these ships,” Metcalf said.