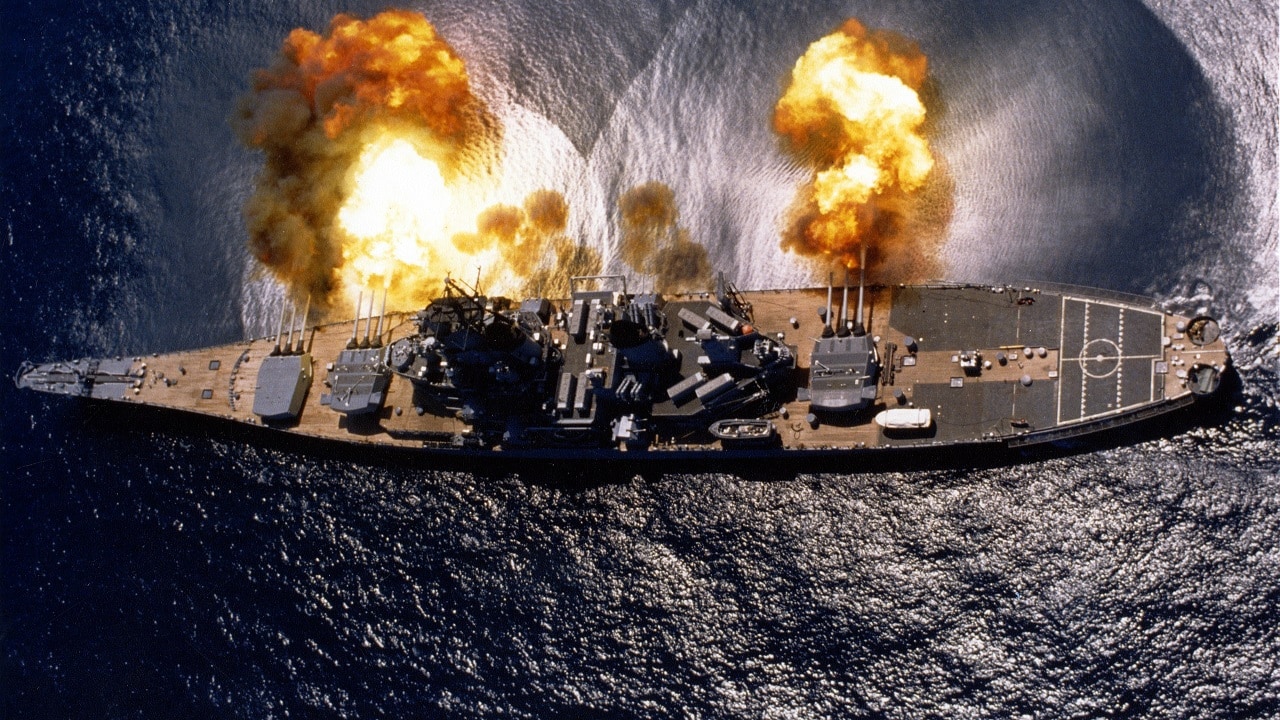 USS Iowa (BB-61) fires a full broadside of her nine 16″/50 and six 5″/38 guns during a target exercise near Vieques Island, Puerto Rico (21°N 65°W). Note concussion effects on the water surface, and 16-inch gun barrels in varying degrees of recoil.

What You Didn’t Know About the Iowa-class Battleships – During the interwar era, the United States Navy put much emphasis on the construction of aircraft carriers, yet didn’t neglect battleships. In the late 1930s three new classes of fast battleships emerged: North Carolina in 1937; South Dakota in 1938; and of course the Iowa-class in 1939. The latter were to be the final class of battleships ever constructed for the U.S. Navy.

Here are some other facts about the Iowa-class.

Each of the Iowa-class battleships was designed to carry three floatplanes for scouting and gunfire spotting. The warships had been built with two quarterdeck catapults, which were removed during the Korean War. Following a refit, the Iowa-class carried helicopters instead.

The battleships were the most heavily armored U.S. warships ever constructed, and were designed to survive ship-to-ship combat with enemy ships armed with 16-inch (406mm) guns. The armor belt was inside the hull, and was 12.1 inches at its thickest. The turrets had 19.7-inches (500mm) of armor, while the decks were plated with 7.5-inches (190.50mm) of armor.

The Iowa-class battleships have often been described as “handsome” vessels. The ships’ design included a clipper bow and long foredeck, which had a graceful sheer. Each had two large funnels and tall tower foremast, and were later fitted with a tripod foremast after the Second World War.

They Could Fit Through the Panama Canal

While the designers set out to create the finest battleship possible, there were some important design considerations and one of those was that the ships could pass through the Panama Canal. That mean the ships could have a beam no wider than 116 feet (33.55meters). Yet even with their massive size, the ships were still capable of making well over 30 knots and thus able to escape the U.S. Navy’s aircraft carriers.

World War II Ended on One

The Iowa-class was designed and built to help ensure victory against Germany and Japan, so it is fitting that it It was aboard the USS Missouri, where in September 1945 the Empire of Japan officially surrendered and ended World War II.

Every One Built is Still Here

Two of the six-planned Iowa-class battleships were canceled and scrapped, but the four completed battleships of the class had each been upgraded during the Cold War and returned to active duty on multiple occasions. Even as the ships have now been decommissioned – likely for a final time – the Iowa-class is unique in that all of the completed vessels have been preserved as museum ships at Pearl Harbor, Hawaii (USS Missouri); Los Angeles, California (USS Iowa); Norfolk, Virginia (USS Wisconsin); and Trenton, New Jersey (USS New Jersey).