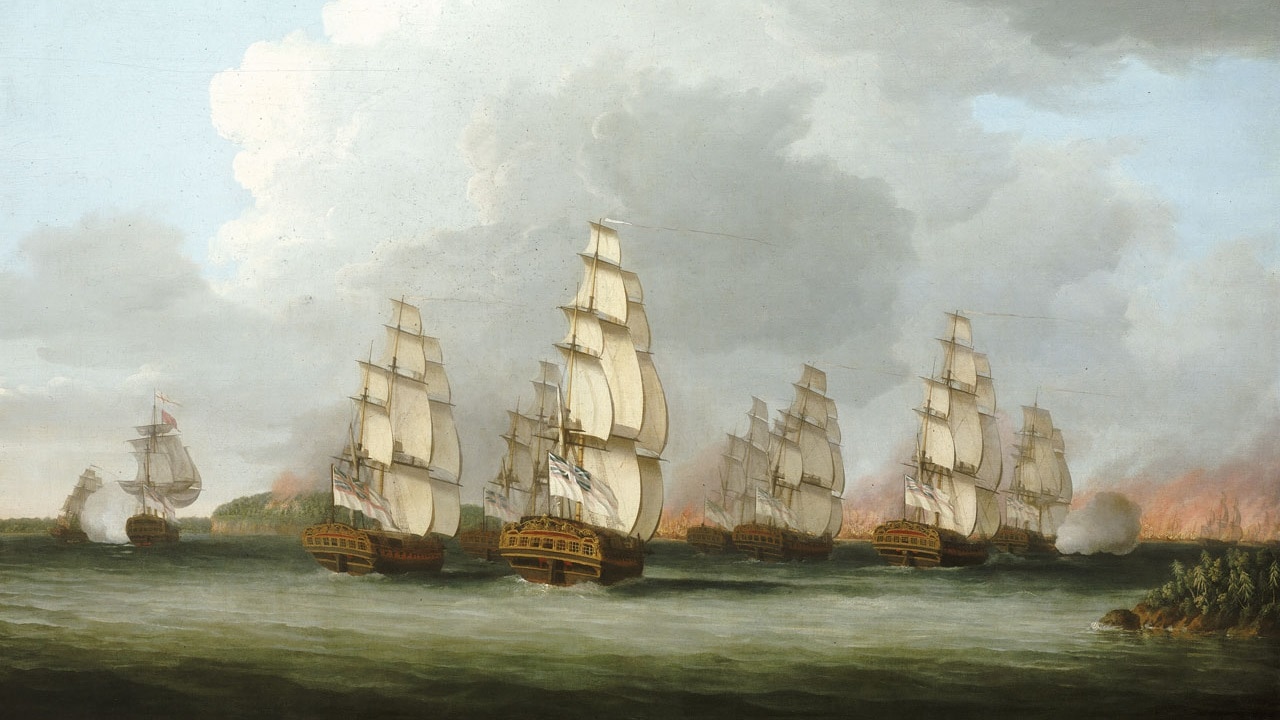 This is a depiction of naval action in the American Revolutionary War's 1779 Penobscot Expedition. Painting shows the bay viewed from the south. In the left background is the ‘Raisonable’ with a white ensign and broad pendant and firing into the ‘Hunter’.

Penobscot Expedition, explained: Paul Revere court-martialed? Say it ain’t so! But it was. Last Tuesday marked the anniversary of the battles of Lexington and Concord, fought on April 19, 1775. Poet Henry Wadsworth Longfellow immortalized Revere’s midnight ride to warn militia commanders that some 800 British regulars had marched out of Boston to seize contraband armaments secreted at Concord. A ragtag line of militiamen confronted the redcoats on Lexington Green before the shot heard ‘round the world rang out during a clash between minutemen and the regulars at the North Bridge in Concord.

Fast-forward to the summer of 1779 in coastal Maine, a pleasant land where I had the privilege of spending a week teaching at Maine Maritime Academy and the University of Maine earlier this month. That June a British force landed on the Penobscot Peninsula, now home to the village of Castine, and constructed a fort on the heights overlooking the east side of the peninsula. (It’s now right across the street from the Maine Maritime campus.) The Castine Historical Society ascribes several motives to the Penobscot Expedition’s masterminds: they meant for Fort George to serve “as a possible Loyalist haven, as a source of timber for the King’s Navy, and as a strategic naval base and coastal trading post.”

Constructing a standing fortification within your enemy’s territory is a time-honored troublemaking strategy, reaching all the way back to the Peloponnesian War and in all likelihood long before. At the time Maine remained part of Massachusetts. Alarmed at the news that redcoats had ensconced themselves in Penobscot Bay, the Massachusetts General Assembly ordered an expeditionary force fitted out to evict them from Fort George. Nineteen ships of war and 24 transports, some borrowed from the Continental Navy, carried a force numbering over 1,000 troops to Maine by July 25. The assembly entrusted Commodore Dudley Saltonstall with overall command of the expedition, while Brigadier General Solomon Lovell headed the ground contingent. Lieutenant Colonel Paul Revere oversaw the force’s ordnance train.

Against the Massachusetts armada—the largest American naval expedition assembled during the Revolutionary War—were arrayed three Royal Navy warships, optimally placed to overshadow the confined waters beneath the fort. In other words, the balance of firepower lopsidedly favored the Americans despite the excellent British tactical position.

On July 27, 1779, Saltonstall’s fleet deposited 227 Continental and Massachusetts marines, 850 militiamen, and 80 of Revere’s artillerymen on the rugged west coast of Penobscot Peninsula. The landing force labored its way up a steep cliff, split into three groups, and moved against the fort along three different axes. Despite some success in ground combat in ensuing days, the attackers failed to dislodge the British garrison from Fort George. Lovell pled with Saltonstall to assault the Royal Navy flotilla to keep it from bombarding his landing force. But the commodore dithered rather than fight.

Delay allowed time for word of the siege to reach the British high command in New York, which promptly dispatched a seven-ship fleet to Penobscot Bay. On August 13 the relief force stood into the bay under the command of Sir George Collier. Upon sighting the British, Lovell abandoned his positions and withdrew up the Penobscot River in anticipation of a sea battle. The next morning, however, Saltonstall, who still outgunned the foe and had the British fleet under his broadside, ordered his ships—to the astonishment of Collier and Lovell—to flee up the river, and his crews to scuttle or burn their vessels. Sailors and troops scurried into the woods and back to Boston overland.

Fittingly, Dudley Saltonstall was cashiered from the service for botching the Penobscot Expedition. Paul Revere likewise faced a court-martial. Though Revere was acquitted, his reputation never recovered from the misadventure, which a placard outside Fort George today—seemingly proudly—touts as “the worst defeat in U.S. Navy history until the attack on Pearl Harbor in 1941.” (Don’t you have to fight to be defeated?) I suppose you take your historical notoriety where you find it when you’re a small coastal Maine town.

What to take away from this profile in ignominy? First, pick the right leadership. Naval commanders have been called the last absolute despots on the planet, and there’s truth to that. A compact unit like a ship tends to take on the personality of its skipper, as does a naval task force its admiral. Saltonstall was clearly the wrong man for the times and situation, morbidly afraid to risk his expeditionary force—and perhaps his own skin—in action against an inferior foe. Had he struck early and hard, suppressing Royal Navy gunfire and isolating Fort George, the Americans probably would have carried the day.

Second, know the terrain. The west coast of the Penobscot Peninsula makes wretched terrain for an amphibious landing. It is steep and rocky. Had the redcoats opposed the landing from atop the cliffs, pouring fire down on Lovell’s troops, a bloodbath may have ensued. Dismal as the expedition’s outcome was, its human cost could have been far worse. In fact, it should have been. A little net assessment goes a long way in martial undertakings. 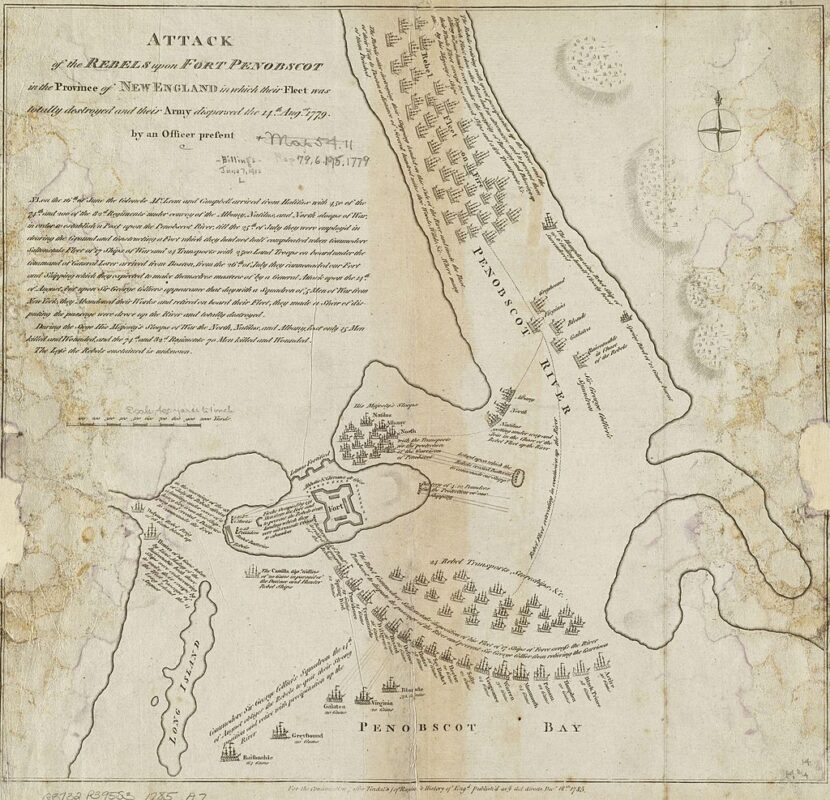 A 1785 map depicting this action. The map is not to scale and marks the Bagaduce as the Penobscot River. Long Island as depicted on this map was later renamed Isleboro.

And third, remember your defeats as well as your triumphs. I had never heard of the Penobscot Expedition before traipsing around Fort George this month. That’s chiefly because the center of gravity of the Revolutionary War had meandered southward by the time Saltonstall, Lovell, and Revere set sail. The British Southern Campaign set the stage for the war’s effective end at Yorktown, Virginia, in the fall of 1781. That theater dominates the history books. But you have to think the assault on Fort George would not be lost to memory were it a tale of heroic feats of arms rather than a disgrace. It’s natural to celebrate the deeds of a Nathanael Greene, who ran Lord Cornwallis’ redcoats ragged in the South; but you can learn just as much, albeit in a negative sense, from studying the misdeeds of a Dudley Saltonstall.

And humility and introspection are invaluable.

In this article:Naval History, Penobscot Expedition, US Navy, War of American Independence