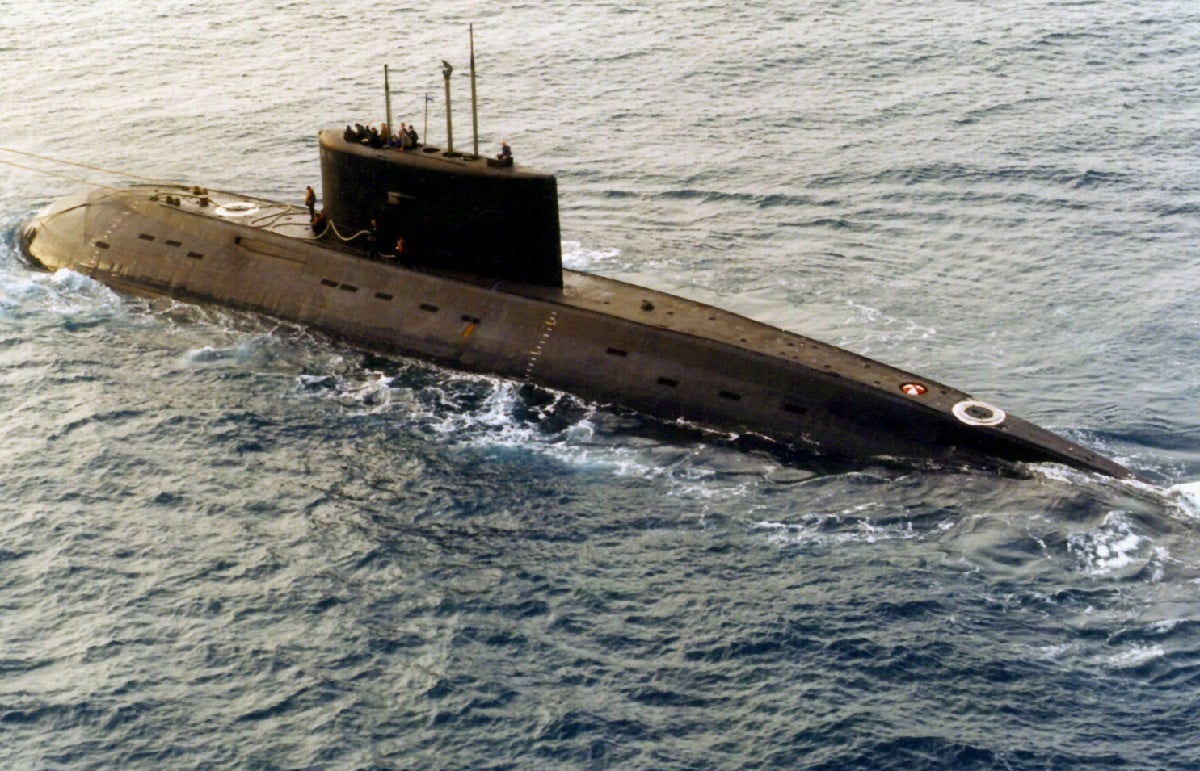 Russia’s Attack Submarine Mainstay: the Kilo-Class – The Russian Project 877 Paltus submarine class, more commonly referred to by its NATO identifier “Kilo,” is the backbone and bulk of the Russian Navy’s attack submarine fleet. While the Kilo is undoubtedly a product of the late Cold War, it is likely to see many more years of service in the Russian Navy, as well as the navies of several countries allied and formerly allied to Russia.

The Kilo, and its upgraded version known as the “Improved Kilo,” were designed to be as quiet as possible while underway – many in naval circles refer to it as the “black hole” due to how quiet it is. To accomplish this, the Kilo is built in a highly streamlined shape that resembles a drop of water, is covered in a rubbery anechoic layer which dulls noise emanating from the submarine, and has the engine mounted on a rubber platform which further stops vibrations from the engine from emanating as they otherwise would.

The Improved Kilo is propelled by two diesel engines and is capable of operating underwater for roughly 260 hours. A kilo has space for 18 torpedoes to be fired through six torpedo tubes and can also carry several cruise missiles.

The Improved Kilo can carry and fire several of Russia’s advanced Kalibr cruise missiles, a critical capability in its current usage by the Russian Navy.

Designed by St. Petersburg’s Rubin Central Maritime Design Bureau, the original Kilo-class first entered service in the Soviet Navy in the first half of the 1980s.

The Kilos are designed for anti-submarine and anti-surface-ship warfare as attack submarines. Following the collapse of the Soviet Union, Russia’s defense industry continued development on the Kilo line of submarines, unlike other vessel classes in the former Soviet Union.

The newest version of the Improved Kilo, the Project 636.3 class, saw improvements to its range and layout to improve quietness, but its sonar technology was a holdover of the original Kilo.

Examples of the Project 636.3 class can cruise at almost 800 feet deep, with a maximum depth of 984 feet, and have a maximum range of 7,500 miles when snorkeling.

The Russian Navy officially plans to replace its Kilos with its new Lada-class diesel-electric submarine, but the development of the vessel has run into serious delays after its propulsion system was found to be inadequate in trials, raising questions about the future of the class as a replacement for the Kilo in the foreseeable future.

The Kilo-Class Won’t Go Away

Kilo-class submarines of all generations serve in every Russian fleet except for the Caspian Sea Flotilla.

In the weeks prior to Russia’s February 2022 invasion of Ukraine, Russia’s Black Sea Fleet returned the Kilo-class Rostov-na-Donu to the Black Sea. Since Russia’s attack on Ukraine began, roughly six Kilo-class ships in the Black Sea have played a supporting role of Russia’s invasion.

Russian state media and Ukrainian military sources have provided information to suggest that the Russian Kilos are being used to strike ground targets in Ukraine, most of which were stationary. Russia’s use of Kalibr cruise missiles could indicate that its stock of precision-guided munitions are low, and that less-accurate cruise missiles are being used to fill in the gaps.

Kilos of all generations are in service with many countries around the world.

India acquired 10 Kilo-class submarines (which is designated as the Sindhughosh-class in Indian service) from the Soviet Union and Russia between the mid-1980s and 2000, but has begun to slowly decommission the class. India’s Kilo fleet has not been without issues, as the Sindhughosh-class Sindhurakshak notably exploded in 2013 as the result of a fire on board in 2013, putting it out of service permanently.

China is also a leading user of the Kilo-class, having acquired two of the original Kilos along with ten total improved Kilos from Russia.

Iran currently possesses three Kilos, which are well-suited for missions in the Strait of Hormuz. Poland and Romania, both former Warsaw Pact countries now part of NATO, have held on to one Kilo apiece, both are more of a headache for Warsaw and Bucharest than they are an asset, although Romania’s has been retired for years. Algeria, Myanmar, and Vietnam also have at least one Kilo as well.

So long as development and production of the Lada-class remain sporadic and halting, it is unlikely that the Kilo will be retired any time soon, despite its Cold War vintage, thereby remaining the mainstay of Russia’s attack submarine fleet for years to come.