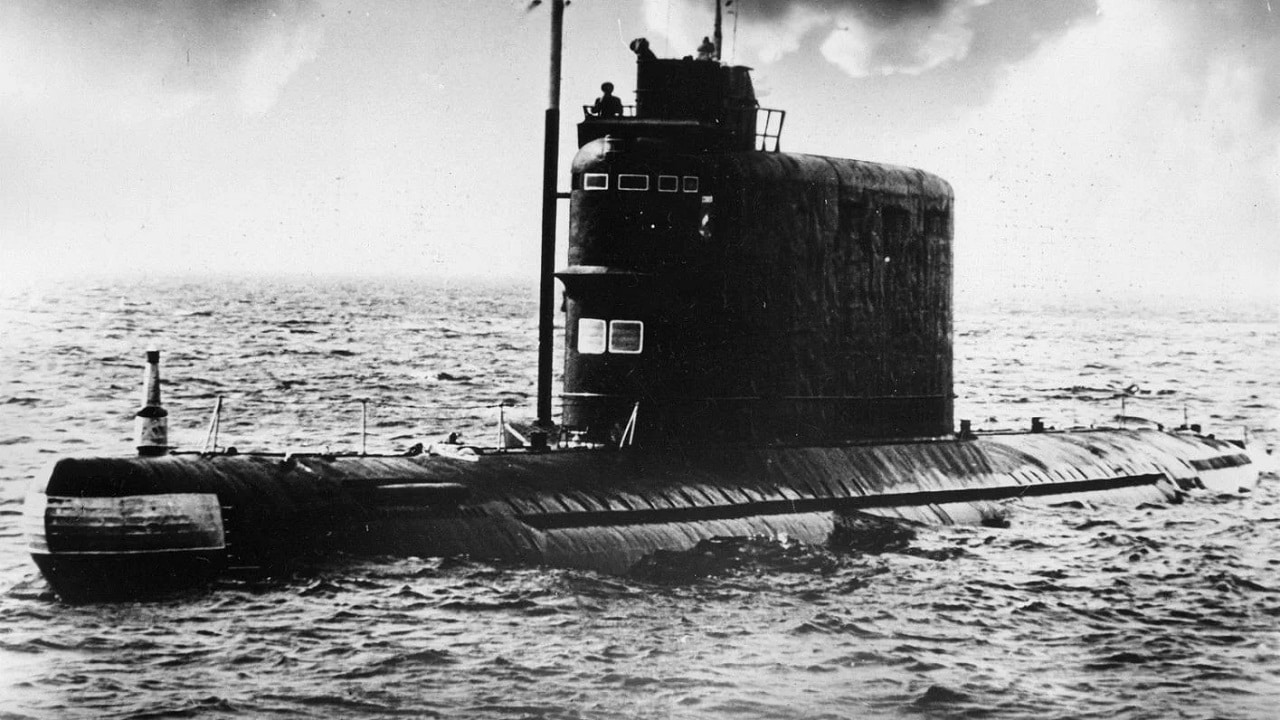 While tensions with Russia are high now due to the Ukraine crisis, the Cold War was an even more dangerous time. And then, both America and the then Soviet Union would do anything to get an advantage: On August 9, 1974, most Americans watched President Richard Nixon resign in disgrace, but on the other side of the world, 178 of their countrymen were pulling off one of the most audacious intelligence operations in history.

On that day, the CIA completed the recovery of the Soviet Golf II-class diesel-electric ballistic-missile submarine K-129, which had sunk in the Pacific six years earlier while on a routine patrol.

The Soviets had given up on finding the boat after an intense search. The US, however, had an advantage.

K-129 was launched in May 1959. After upgrades in the mid-1960s, it had a new suite of electronic systems and carried one of the Soviet Union’s newest weapons: three R-21 nuclear-tipped submarine-launched ballistic missiles — the first missiles that Soviet subs could launch while submerged.

On February 24, 1968, K-129 and its 98-man crew sailed out of their base in Kamchatka. The sub had been ordered to operate under radio silence for its first two weeks at sea.

By March 8, however, K-129 still hadn’t reported in. After it failed to report for a second day, the Soviets panicked and launched a major search operation.

Thirty-six vessels scoured over a million square miles of the Pacific Ocean. They were joined by 53 aircraft that flew more than 286 flights for over two months.

The Soviets even resorted to searching with submarines using their sonars at full power, and calling out to K-129 over open channels. But after months of operating in bad weather, with waves as high as 45 feet, they called off their search.

The US Navy had been watching closely. The Soviet search, done with no apparent concern about detection by US submarines and aircraft, made it clear that something extremely important had been lost — likely a ballistic-missile sub.

The US Navy had a massive advantage over its Soviet counterpart. The Sound Surveillance System, or SOSUS, a network of underwater listening devices built to detect Soviet submarines, had picked up the sound of an exploding submarine in the search area.

The Navy was able to narrow its search area to 5 miles and sent USS Halibut, a cruise-missile submarine repurposed for intelligence operations, to find K-129. After more than a month of searching, Halibut found the Soviet sub.

It had suffered a catastrophic mechanical failure, but the most important parts of the submarine, including its missile silos, remained largely intact. At least one and possibly two of the R-21 missiles appeared to still be in their silos.

Realizing the value of a largely intact Soviet submarine with nuclear missiles aboard, the CIA immediately took the lead in a recovery effort, codenamed Project Azorian.

Early ideas included using rockets or underwater balloons to raise the wreck, but it quickly became obvious that the only way to recover K-129 was with a claw attached to a ship.

At that time, nothing had ever been recovered from a depth of 16,500 feet before, let alone an object weighing some 2,000 tons. The deep-sea mining industry was still in its infancy, but one American company, Global Marine, had a reputation as the best builder of ocean mining vessels.

The CIA secured Global Marine’s services in constructing and operating a vessel large enough for the mission. Lockheed was hired to make the claw, which was called the capture vehicle.

The CIA still needed a cover story. Fortunately, it found a perfect one in Howard Hughes.

A Texas oil scion and business magnate, Hughes had a reputation as an eccentric recluse, which made the cover story — a financially risky effort to find manganese nodules using unproven deep-sea mining methods — seem legitimate.

Hughes had taken on US government projects before, and he agreed to help the CIA recover the sub.

The Hughes Tool Company would be the public face for the Hughes Glomar Explorer, the massive 620-foot ship specially designed for one purpose: to raise K-129 from the sea floor and bring it into its hold through a “moon pool” in the ship’s hull.

The Glomar Explorer arrived over the wreck on July 4, 1974, six years after the sub had been located. It spent the next month lowering the capture vehicle.

The Glomar Explorer was twice surveilled by Soviet ships. The first time, a missile-range instrumentation ship watched the Explorer and flew a helicopter around it for a few days before leaving.

The second ship, an ocean-going tug used for intelligence-gathering, stayed on the scene for weeks. The tug positioned itself so it could recover the Explorer’s trash and repeatedly harassed the US ship, once sailing within 50 feet of it.

But the Soviets had no reason to believe anything suspicious was happening, and the Explorer’s crew continued working. After about a month of lowering the claw, the Americans grabbed the sub and began to raise it.

A few days into the recovery, disaster struck. Several hooks on the claw suddenly broke, and two-thirds of the submarine, including the portion with the missile silos and the code room, fell back into the abyss.

The fallen piece couldn’t be recovered, but the US crew continued to raise what was left. In a stroke of luck, the Soviet tug sailed away when the remains of the K-129 were just 1,000 feet below the Explorer.

With the wreckage aboard, the Explorer’s crew began picking it apart as the ship headed back to the US.

The CIA was preparing for a second recovery effort, called Project Matador, but on March 18, 1975, reporter Jack Anderson broke the story of Project Azorian.

CIA Director William Colby had personally persuaded other journalists, including Seymour Hersh of The New York Times, to hold their stories until after K-129 had been fully recovered. Anderson refused Colby’s requests and broadcasted his story on national radio.

A partial success and a lasting legacy

With the CIA’s cover blown, the White House canceled the second recovery effort. Project Matador was shut down, and the Soviet Navy began closely monitoring the ocean around the wreck.

But the operation was still fruitful. The CIA has never fully disclosed what it recovered, but the haul is believed to include at least two nuclear-tipped torpedoes and a collection of documents, as well as the sub’s bell.

The recovered section also provided insight into Soviet submarine design, such as where important pieces were manufactured, how often they were replaced, and the thickness of the sub’s hull.

Six bodies and a number of body parts were also recovered. In September 1974, as they sailed home, the crew of the Explorer conducted a burial at sea for the fallen submariners.

CIA director Robert Gates gave Russian President Boris Yeltsin a recording of the burial in 1992. The Russians were also given the sub’s bell.

An enduring legacy of Project Azorian was the “Glomar Response,” a bit of legalese devised by the CIA in response to a Freedom of Information Act request filed by Rolling Stone reporter Harriet Ann Phillippi in 1976.

The agency was legally required to reply, so it said it could neither “confirm nor deny” the existence of records relating to the program. A court later upheld it as a legitimate response.

Benjamin Brimelow is a reporter for The Business Insider.