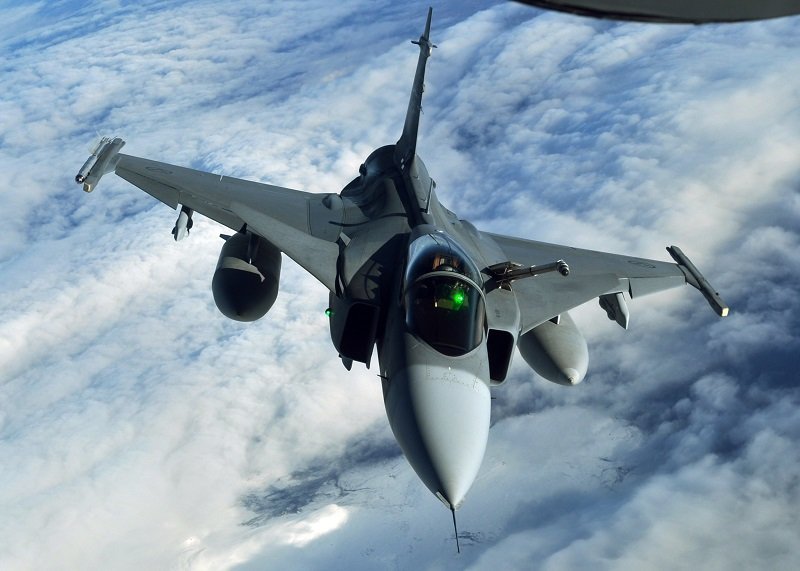 A Swedish JAS-39 Gripen returns to the play areas of the Arctic Challenge exercise Sept. 24, 2013, over Norway, after taking on fuel from a U.S. Air Force KC-135R Stratotanker. The JAS-39, in coordination with aircraft from other nations, formed a Blue assault force, which had to bypass or neutralize an opposing Red force attempting to stop them from an overall objective outlined in the day's scenario. (U.S. Air Force photo by 1st Lt. Christopher Mesnard/Released)

NATO’s next training operation will be in Sweden – and Russia will be watching: With the Russian military invested in Ukraine, NATO is preparing for one of its biggest exercises in Scandinavia. In June, more than a dozen NATO members and partners will be joining forces in northern Europe for Baltic Operations 22, a large-scale maritime exercise.

The location of this year’s iteration of the annual Baltic Operations Exercise was a special meaning. The exercise will take place in Sweden as the Nordic country is preparing alongside Finland to apply for membership in NATO.

This will be the 51st iteration of the Baltic Operations exercise, and it will take place between June 5 and June 17, a little more than 100 days after the Russian military invaded Ukraine.

The Baltic Operations exercise will focus on NATO’s naval strike and support capabilities. As far as the participants go, 14 NATO members and two partner nations (Sweden and Finland) will deploy more than 45 surface warships and submarines, about 75 aircraft, and approximately 7,000 troops.

“[The exercise] provides a unique training opportunity that strengthens combined response capability is critical to preserving the freedom of navigation and security in the Baltic Sea region. Participating nations will exercise a myriad of capabilities that demonstrate the inherent flexibility of maritime forces including amphibious operations, gunnery, anti-submarine, air defense exercises, as well as mine clearance operations, explosive ordnance disposal and diving and salvage operations,” Pentagon Press Secretary John F. Kirby said in a press briefing.

From the NATO side of the house, Belgium, Bulgaria, Denmark, Estonia, Finland, France, Germany, Latvia, Lithuania, the Netherlands, Norway, Poland, Turkey, the U.K. and the U.S. will be sending forces to the exercise.

“Unique to BALTOPS 22 is Sweden’s role in hosting the exercise, which coincidentally occurs during the Swedish Navy’s 500th anniversary so we’re grateful for their ability to lead and to host this year. Just to level set, this year’s BALTOPS will include forces from Belgium, Bulgaria, Denmark, Estonia, Finland, France, Germany, Latvia, Lithuania, the Netherlands, Norway, Poland, Sweden, Turkey, United Kingdom and of course the United States. So, big exercise lots to get done and I know they’re looking forward to it,” Kirby added.

The participation of the Turkish forces is bound to offer some awkward moments.

Turkey is the only NATO member that has vetoed the membership of Sweden and Finland in the transatlantic military alliance. For domestic consumption purposes and narrow strategic goals, Turkish President Tayyip Erdogan has repeatedly said that Ankara will be blocking the applications of Sweden and Finland because of their condemnation thru words and actions of Turkey’s abhorrent human rights policies and illegal invasion of northern Syria.