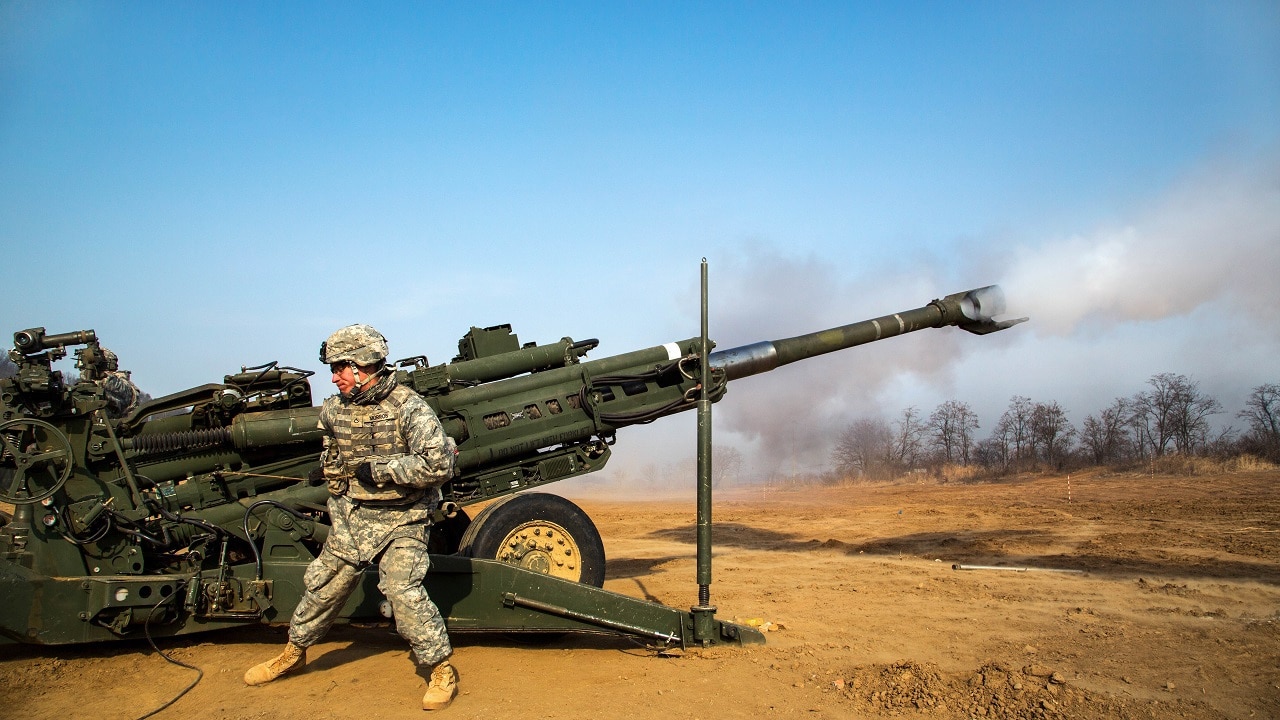 The United States has delivered to Ukraine 90 towed M777 155-millimeter Howitzers made of lightweight titanium since April. Australia and Canada have chipped in ten more. These old-fashioned seeming weapons, profiled in this earlier article, can fire rocket-assisted shells with a range of 18 miles, outranging the most common Russian artillery systems.

Over 420 Ukrainian personnel received training in Germany to operate or maintain these weapons which by now have nearly all been deployed to the frontline. The injection of artillery, combined with dozens of other systems donated by NATO, clearly threatens to upset the already unfavorable prospects of Russia’s rebooted offensive in Eastern Ukraine.

As such it was obvious Howitzers would become priority targets for Russia’s military, for reasons both material and symbolic.

Indeed, on Wednesday, Russia’s Zvezda state-owned TV channel released a video of an air and artillery strike targeting a Ukrainian M777 Howitzer unit. While the footage highlights the vulnerability of these weapons and their unarmored towing vehicles, the clip also calls into question whether Russia can effectively exploit that vulnerability.

The video shows a Russian surveillance drone observing at least three towed M777 Howitzers (ie. a firing platoon) deploying to a position in an open field next to a forest. The video is taken allegedly near the village of Podgornoye (or Pidhorodne), located near Bakhmut. Ukrainian forces here are surrounded by attacking Russian forces to the north, south, and east.

The longer video from the Russian MoD shows that they tracked the movement of at least 3 Ukrainian M777 howitzers before targeting them with a KUB-BLA loitering munition and MLRS fire. Not clear how much damage the MLRS fire caused. https://t.co/eAgXKAvlan pic.twitter.com/rPBxMvVWpY

The Russians then attack with a Zala KUB-BLA kamikaze drone. These small ‘loitering munitions’ measure 1.21 meters from wingtip to wingtip and have an electrically-powered pusher propeller. They have a maximum range of 25 miles while carrying up to 6.6 pounds of explosives and also can be used for reconnaissance.

Many Zala KUB-BLAs have been recovered after having crashed, relatively intact, in Ukraine, implying flaws in the munition.

What is claimed to be a Russian KUB kamikaze drone has reportedly crashed (failed to detonate?) in Kiev.#Russia #Ukraine pic.twitter.com/sNoegvu5JJ

In the video, the KUB-BLA plunges toward two of the Howitzers deployed with their X-shaped carriage dug into the ground. A few cannoneers can be seen moving, oblivious to the kamikaze aircraft diving towards them at up to 80 miles per hour.

Are the Drones and Rockets Effective?

However, the drone arcs well above the Howitzer highlighted in the targeting reticle. It begins to correct its course too late before detonating its warhead, spraying a puff of shrapnel toward the Howitzers. The startled crew scurry away. It’s unclear if there are any casualties, though some injuries and minor damage to the Howitzer appear possible.

The footage then shows the Ukrainian battery, its Howitzers limbered onto the trucks, rushing into the concealment of the woods, where they become very difficult to pick out amongst the foliage. This was absolutely the right thing to do as soon as they realized they had been located by Russian observers.

The video concludes with footage of a Russian multiple rocket launcher barrage rippling across the edge of a woods, punching craters into the soil. However, a large part of the barrage appears to land outside of the woods, and the part inside does appear far from where the trucks were seen entering the woods. That said, unarmored trucks and the personnel riding inside can be affected dozens of meters away from the impact point of larger munitions, though the trees might also absorb shrapnel.

The Russian defense ministry claims “All the equipment and the American Howitzers were eliminated”, though whether any damage was inflicted cannot be confirmed from the video.

We don’t know for sure how the video was edited, how much time elapsed, or if any parts have been misleadingly rearranged. Generally, one should assume any military will only volunteer footage favorable to its message. It seems likely that if Moscow had convincing proof of the M777 battery’s destruction, it would have been released.

It seems the Russian observer made a mistake to lead the attack with a lone KYB drone, given its limited potential even if it had landed more accurately. Waiting for an artillery strike to be ready could have allowed the barrage, and its many hundreds of pounds of munitions, to fall on the Ukrainian unit while it remained in the open and unprepared.

Once alerted by the drone attack, the Ukrainian battery was able to limber up (though we don’t know how much time elapsed) and move to effective-seeming concealing terrain.

Perhaps the firing coordinators felt they had to ‘use-or-lose’ the KYB drone, given its limited 30-minute endurance, or weren’t confident an artillery barrage could be called in on time.

Regardless, the situation highlights the known downsides of using the towed artillery systems the U.S. supplied—they are fundamentally far more vulnerable to shells, rockets, and bombs. Any shell landing dozens of meters away still has a significant risk of damaging unarmored vehicles or harming personnel, whereas they’d need to land closer to a self-propelled Howitzer.

While Ukraine will eventually receive advanced armored Howitzers from France, Germany, Slovakia, and the Netherlands, the U.S. gave Ukraine towed systems because they could be brought into service far more rapidly and deliver more firepower sooner.

Here’s why: a U.S. armored M109 Paladin armored Howitzer is roughly seven times heavier than an M777 and requires hundreds more personnel and a complex logistical infrastructure to support in the field, usually including a separate armored ammunition carrier. So it was a choice between 90 M777s or a much smaller number of M109s that may not have even been ready to see battle in May.

The tactical concept for keeping the towed M777s alive is to exploit their range of 18 miles, compared to 12 miles for more common Russian artillery systems. (Sidenote: the M777 can fire the 24-mile range M982 Excalibur round, but so far only the four Howitzers supplied by Canada apparently have the fire-control equipment to use the round, which has indeed been supplied by Ottawa).

Attempted geolocation implies the battery was situated near the edge of its 18-mile range, with Russian forces, per a map on UA War Data, deployed roughly 16-18 miles away to the north, east, and south. (Yes, this particular salient is heavily embattled.)

That means effective use of mobility and concealment to avoid counter-battery strikes is essential.

One last observation from the strike is that small loitering munitions, like the KUB-BLA and the Switchblade-300 system the U.S. has given Ukraine and seen action, may lack the punch to reliably disable even soft targets like a towed Howitzer, at least without landing exactly on target.

Overall, the Russian strikes don’t seem to demonstrate the desired level of accuracy, though that doesn’t prove they didn’t inflict damage. The footage, obscured by concealing trees, simply doesn’t confirm the condition. Quite possibly Moscow doesn’t know either.

In this article:Howitzer, M777A2, Russia, Ukraine, US Military, War in Ukraine