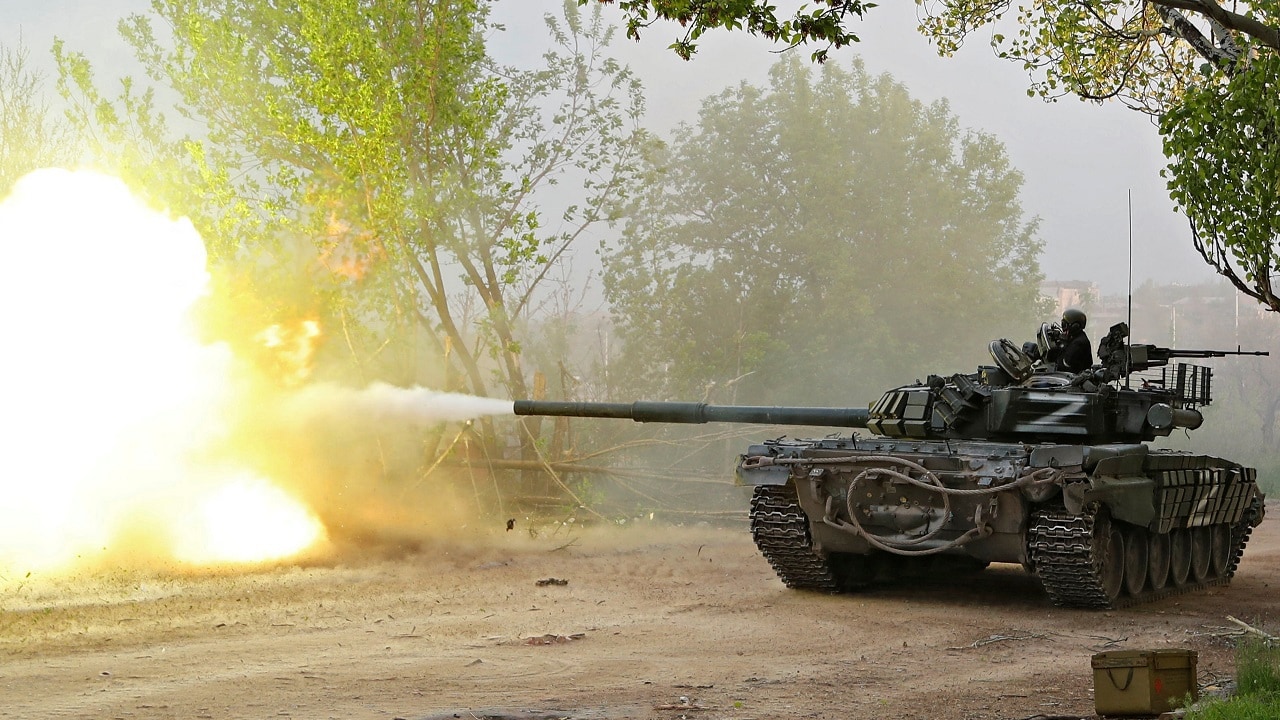 Service members of pro-Russian troops fire from a tank during fighting in Ukraine-Russia conflict near the Azovstal steel plant in the southern port city of Mariupol, Ukraine May 5, 2022. Picture taken May 5, 2022. REUTERS/Alexander Ermochenko

Can Ukraine Really Defeat Russia? – Over the past few days, a flurry of senior leaders in both Ukraine and Washington have issued defiant claims of not merely resisting Russian aggression, but pushing towards outright victory. While such aspirations are entirely understandable, it is unwise to set policy seeking a preferred outcome if there does not exist a rational path by which Ukraine could accomplish that objective. At present, most indicators, fundamentals of war, and current battlefield trendlines support the prospect of a Ukrainian defeat.

At a speech on Monday on Ukraine’s “Victory Day,” commemorating the World War II defeat of Nazi Germany, President Volodymyr Zelensky categorically declared that just as Ukraine defeated its enemy in 1945, “we have no doubt that we will win” the war against Russia. Zelensky’s foreign minister went a step further, adding that Kyiv wasn’t merely seeking to win the Battle of Donbas, but defined “victory for us in this war will be the liberation of” all Ukrainian territories. There has been no shortage of Western voices supporting this idea – and in one case, escalating the war.

And that’s not all. In an address to the Ukrainian parliament last week, British Prime Minister Boris Johnson said that Ukraine’s war with Russia was a straightforward case of “good versus evil,” and that “Ukraine will win; Ukraine will be free.” On Saturday, Rep. Seth Moulton said the United States should not merely help Ukraine defend itself, but openly declared the U.S. was “fundamentally at war” with Russia, via proxy, and “its important that we win.” One would think that all these increasingly optimistic statements were borne out of tangible evidence that Russia is losing. Instead, nearly the opposite is happening.

In testimony before the Senate Armed Services Committee on Tuesday, Director of National Intelligence Avril Haines believes Putin “is preparing for a prolonged conflict in Ukraine” and still has aspirations beyond the Battle of Donbas. Haines said he thought the Russian leader was “likely” to order some level of a national mobilization to support such goals. Evidence on the ground supports such a likelihood and helps explain why Putin is likely to make that move.

After the well-chronicled disaster of Putin’s opening round of attacks in late February and early March, the Russian military has made a number of effective moves to reorient their efforts, correct tactical and operational deficiencies, and press towards attainable military objectives. Over the past month-plus, Russia has translated those changes into methodical, if slow, battlefield success.

In mid-April, Russia captured the critical transportation hub of Izyum near the northern shoulder of the Donbas lines. Just days ago, after nearly a two-month battle, Putin’s troops captured another key city in northern Donbas that controls several essential road junctions in Popasnaya. Kremlin forces have now pushed deeper into Severdonetsk, putting Ukrainian troops at risk at Lysychansk, just to the southwest of Severdonetsk.

Russia appears to be using tactics that mimic what worked for them in Mariupol: surrounding a city with ground troops, cutting off Ukrainian forces’ ability to get reinforcements (or food, water, and fuel), then relentlessly pounding Ukrainian positions with artillery, rocket fire, and airstrikes, progressively shrinking the ring around the city.

Eventually, Russian troops move in with infantry and armor to strike the defenders when they are at their weakest, capturing the city. The pattern has proven effective and is presently being reprised in numerous Ukrainian strongholds in the Donbas. Russia’s strategy in the Donbas is coming into sharper relief with the capture of each major town, and it doesn’t bode well for Kyiv.

There is a pocket-forming around the Ukrainian troops in the northern shoulder of the Donbas. Russia is seeking to surround the UAF troops in this pocket by saturating key Ukrainian strongholds with heavy bombardment, attempting to peel off more cities on the outside of the pocket, progressively forcing UAF defenders either further west – or trapping them in the pocket and then destroying them by fire and later ground troops.

After taking Izyum, Popasnaya, and moving on Severdonetsk, Russia is now heavily investing Lysychansk, Kramatorsk, and Slaviansk, each a city of 100,000 or more. There are tens of thousands of Ukraine’s best, most experienced troops manning the frontlines in the Donbas. If Russia successfully takes enough cities there, cutting the UAF troops off, they can reprise their bloody tactics used to destroy Mariupol.

Whether Putin has enough troops, ammunition, and time to complete the destruction of the UAF positions in the Donbas without mobilizing some portion of its reserve forces is an open question. What is clear, however, is that Russia’s current operations are slowly strangling Ukrainian troops in the Donbas and that despite optimistic rhetoric out of Kyiv and Western capitals, the battle is trending towards a Russian tactical success, possibly within two months.

Militarily speaking, there is very little hope that even all the promised support of heavy weapons and ammunition from the West can be delivered to the front, the Ukrainian troops adequately trained, and firepower brought to bear in time to change the course.

There is always the possibility that Russia may run out of steam before completing the encirclement, that Ukraine is able to drag the battle out beyond two months, and that a stalemate could be won by Kyiv. But that falls more in the category of “hope” and is a poor foundation for basing expectations. By ignoring these battlefield realities, the West is setting the stage for potentially compounding its problems.

Ukraine’s and Western leaders continue making statements that lead their publics to believe that things are getting better, that the war is trending in their favor, and that soon the Western-promised heavy weapons will stop the Russian advance. That remains at best a distant prospect. Basing policy on the expectation of that unlikely (but highly preferred) outcome rather than the realistic possibility that Russia could take the Donbas is unwise and dangerous. Consider the ramifications of this unwillingness to face hard truths.

By continuing to seek a military victory in Ukraine, Ukraine’s troops will continue fighting, no negotiated settlement will be realistically sought, and most likely Russian troops continue making progress. As a result, more Ukrainian civilians and troops will continue to be killed and wounded, more cities destroyed, and the economic and food crises – for both Ukraine and the world – will worsen. The most likely outcome will not change (a negotiated settlement, not a Ukrainian military victory), but the cost to Kyiv will be much, much worse.

For the United States and the West, every day this war continues, the risk continues that through someone’s miscalculation, some accident, or just a foolish act by one side or the other results in a direct clash between Russia and NATO, trigging an Article 5 situation that could drag the United States into a war with a nuclear superpower. However altruistic it may be to want to help Ukraine defend itself from this Russian invasion, there is nothing at stake in Eastern Europe that is worth getting drawn into a potential nuclear war with Russia; a war from which we may not survive. 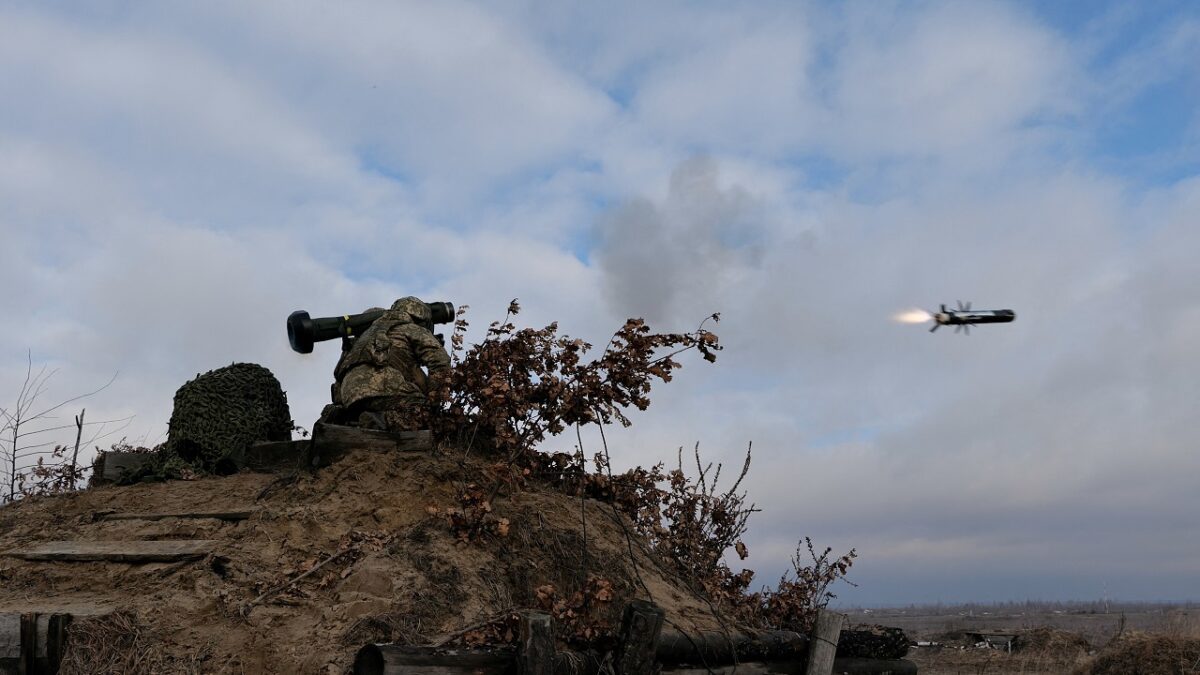 Service members of the Ukrainian Armed Forces fire a Javelin anti-tank missile during drills at a training ground in an unknown location in Ukraine, in this handout picture released February 18, 2022. Ukrainian Joint Forces Operation Press Service/Handout via REUTERS ATTENTION EDITORS – THIS IMAGE HAS BEEN SUPPLIED BY A THIRD PARTY/File Photo

Gambling that current battlefield trends don’t hold, hoping that Ukraine can hold on in the Donbas, and believing that UAF will eventually drive Russia back to its country, do the people of Ukraine a disservice. Even if it works out that way – an improbable prospect – it would take years to accomplish and result in such a staggering loss of Ukrainian life that it would be a pyrrhic victory. The better course is to engage in negotiations to do whatever it takes to end the fighting, end the killing of Ukrainian people, and hasten the day when rebuilding can start. However, continuing to base policies on pride and hope will almost certainly cause thousands more preventable deaths in Ukraine.