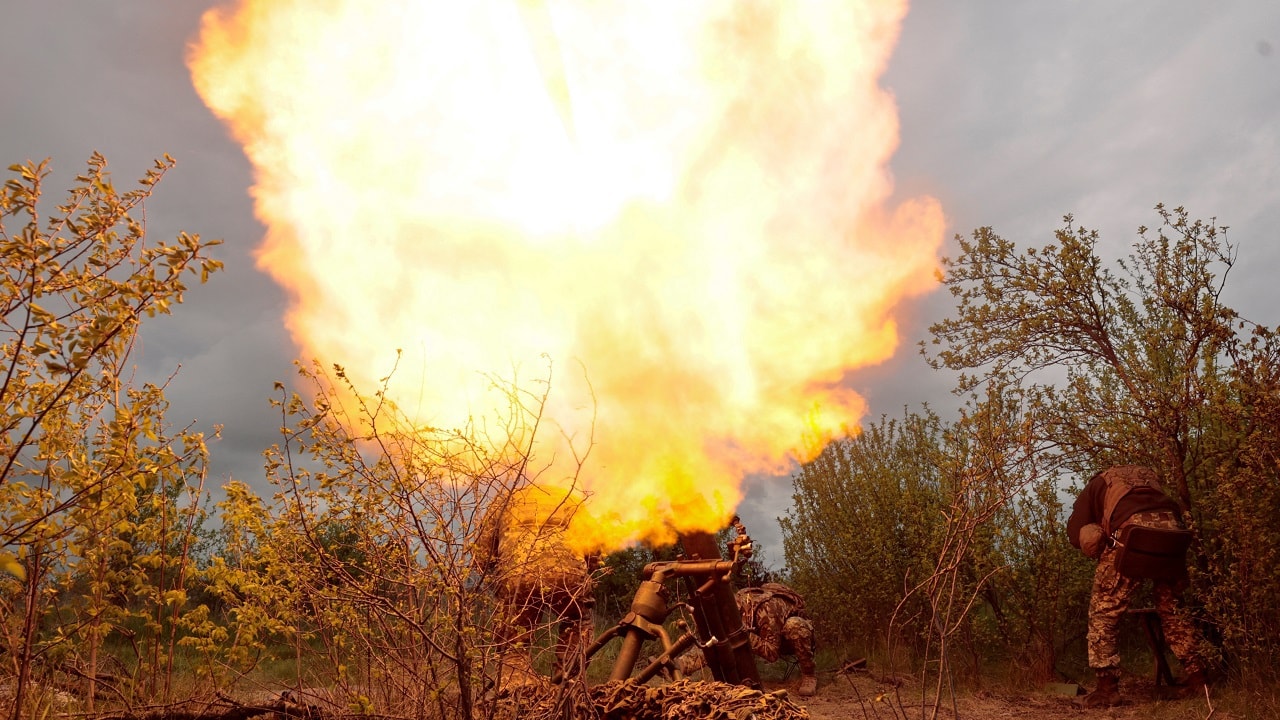 Ukrainian servicemen fire with a mortar at a position, as Russia's attack on Ukraine continues, at an unknown location in Kharkiv region, Ukraine May 9, 2022. REUTERS/Serhii Nuzhnenko

The Ukrainian forces inside the besieged city of Mariupol have been a symbol of the country’s resistance to the Russian invasion. They held out for nearly three months, exacting a bloody toll on Russian and proxy forces that have attacked the port city on the Black Sea.

Surrendering After a Long Holdout

That claim falls in line with the Ukrainian statement on Monday by the General Staff of the Armed Forces, who said in a statement that the “combat mission” inside of Mariupol had been completed. The military ordered the remaining commanders inside of the besieged steelworks “to save the lives of their personnel.”

While the roughly 1,000 civilians that had been holed up with the military inside the sprawling Soviet-era steelworks had been evacuated through humanitarian corridors, there had been about 2,000 troops consisting of the soldiers of the Azov Regiment, Marines, the National Guard, border guards, police and territorial defense units inside a maze of tunnels constructed for the defense of the area.

However, it was believed that only 600 troops remained and it is unclear if any of those troops remain in underground tunnels.

The Azov Regiment has been characterized as being a “far-right” organization with the Russians saying it is a Neo-Nazi unit, and that may play a factor in any decision to exchange prisoners. But the commander, LTC Denys Prokopenko said his priority was saving “as many lives of personnel as possible”.

In a released video statement, Ukraine’s Deputy Defense Minister Hanna Malyar said that the wounded members were evacuated, and the troops taken to Russian-controlled territory would be later repatriated in a prisoner exchange.

“Fifty-three seriously injured people were evacuated from Azovstal to a medical facility in Novoazovsk for medical care,” Malyar said. “Another 211 people were taken to Olenivka through the humanitarian corridor.

“Thanks to the defenders of Mariupol, Ukraine gained critically important time to form reserves and regroup forces and receive help from partners,” she added.

While the Ukrainian military and government didn’t use the word surrender, the Russian military did, while not characterizing the troops inside of Mariupol as military but as “militants.”

“Over the past 24 hours, 265 militants laid down their arms and surrendered, including 51 heavily wounded,” the Russian Ministry of Defense said in a press briefing on Tuesday.

“The 82nd day of our defense is coming to an end. A difficult day. But this day, like all others, is aimed precisely at saving our country and our people,” Zelensky said.

While the surrender of the forces inside of Mariupol is being trumpeted by Moscow as a victory, their forces have been thrown back from Kharkiv and in a largely symbolic move, Ukrainian forces from the city, have reached the Russian border.

Elsewhere, the fighting in the industrial heart of the Donbas continues to rage. The Ukrainian military has stated that they have repelled attacks around the city of Severodonetsk attempting to encircle the troops defending it.