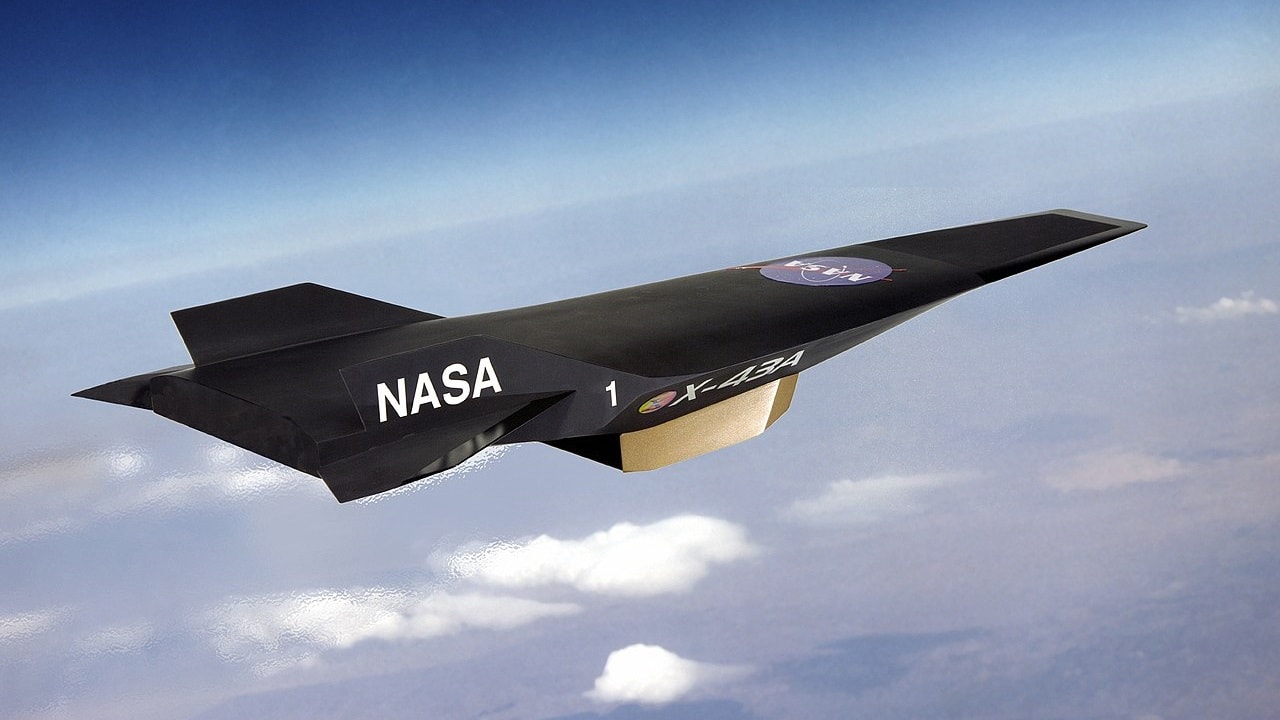 An artist's conception of the X-43A Hypersonic Experimental Vehicle, or "Hyper-X" in flight. The X-43A was developed to flight test a dual-mode ramjet/scramjet propulsion system at speeds from Mach 7 up to Mach 10 (7 to 10 times the speed of sound, which varies with temperature and altitude).

In the past week, I’ve written about the (most likely apocryphal) SR-91 Aurora spy plane, which supposedly could hit speeds of Mach 5, and the SR-72—proposed successor to the SR-71 Blackbird—which is touted to be able to hit speeds of Mach 6. Now we’re going to discuss a hypersonic aircraft that would leave even those birds in the dust, at a mind-blowing Mach 9: the NASA X-43 (part and parcel of NASA’s Hyper-X program).

“So We Hit the Floor, Slicked Up to the Nines…”

Unlike the Aurora and the SR-72, the X-43’s existence is an actual verifiable fact, with a total of three built, and making its maiden flight on 02 June 2001; the first specimen did not live to tell the tale, as the Pegasus booster lost control about 8 seconds after ignition when it was released from the B-52 carrier, as the plane was destroyed by the Range Safety Officer … However, the program rose like the proverbial Phoenix from the ashes of its own destruction. During the more successful second and third flights, the scramjets operated for approximately 10 seconds followed by 10-minute glides and intentional crashes into the ocean (the vehicles were not designed to be recovered).

To be more precise about its speed capabilities, the X-43A, during its third and final flight in November 2004, successfully attained a speed of Mach 9.6 (7,365 mph; 11,852 kph) as it flew over the Pacific Ocean west of California at an altitude of about 110,000 feet (33,500 m); as a result, NASA was officially recognized for setting the speed record for a jet-powered aircraft by Guinness World Records. For a basis of comparison, the previous record for an air-breathing vehicle—but not an airplane—was held by a ramjet-powered missile, which achieved slightly more than Mach 5, whilst the highest speed attained by a rocket-powered airplane, the X-15 piloted by William “Pete” Knight, was Mach 6.7.

Yet, hard to believe as it may seem, despite the world record-smashing accomplishments of the X-43 program, it still ended up on the chopping block!  The X-43C was suspended indefinitely in March 2004, with the Boeing X-51 Waverider being tabbed as the successor project. The X-51, which completed its first powered hypersonic flight on May 26, 2010, did not attain the same speed capabilities as the X-43, instead, cruising along at a comparatively modest Mach 5 (3,300 mph; 5,300 kph) and an altitude of 70,000 feet (21,000 m). However, the Waverider did notch some records in its own right, such as that of the longest duration for a powered hypersonic flight, to the tune of a flight of over six minutes on May 1, 2013. Moreover, as noted by the official U.S. Air Force fact sheet, the “X-51A program was an unprecedented achievement proving the viability of air-breathing, high-speed scramjet propulsion using hydrocarbon fuel.”

As in the case of the X-43, the X-51 used the B-52 Stratofortress as its launching platform (as an aside, this is yet another testament to the flexibility, adaptability, and staying power of the legendary “BUFF” [Big Ugly Fat…er, Fellow]) and was not designed to be recovered.  A total of four were built.

The X-43D would have actually expanded the speed envelope to an even more incredible Mach 15 (11,509 mph; 18,509 kph). As of January 2005, only a feasibility study had been conducted by Donald B. Johnson of Boeing and Jeffrey S. Robinson of NASA’s Langley Research Center in conjunction with Next Generation Launch Technology (NGLT) Program and the office of the Director of Defense Research and Engineering (DDR&E). According to the introduction of the study, “The purpose of the X-43D is to gather high Mach flight environment and engine operability information which is difficult, if not impossible, to gather on the ground.”