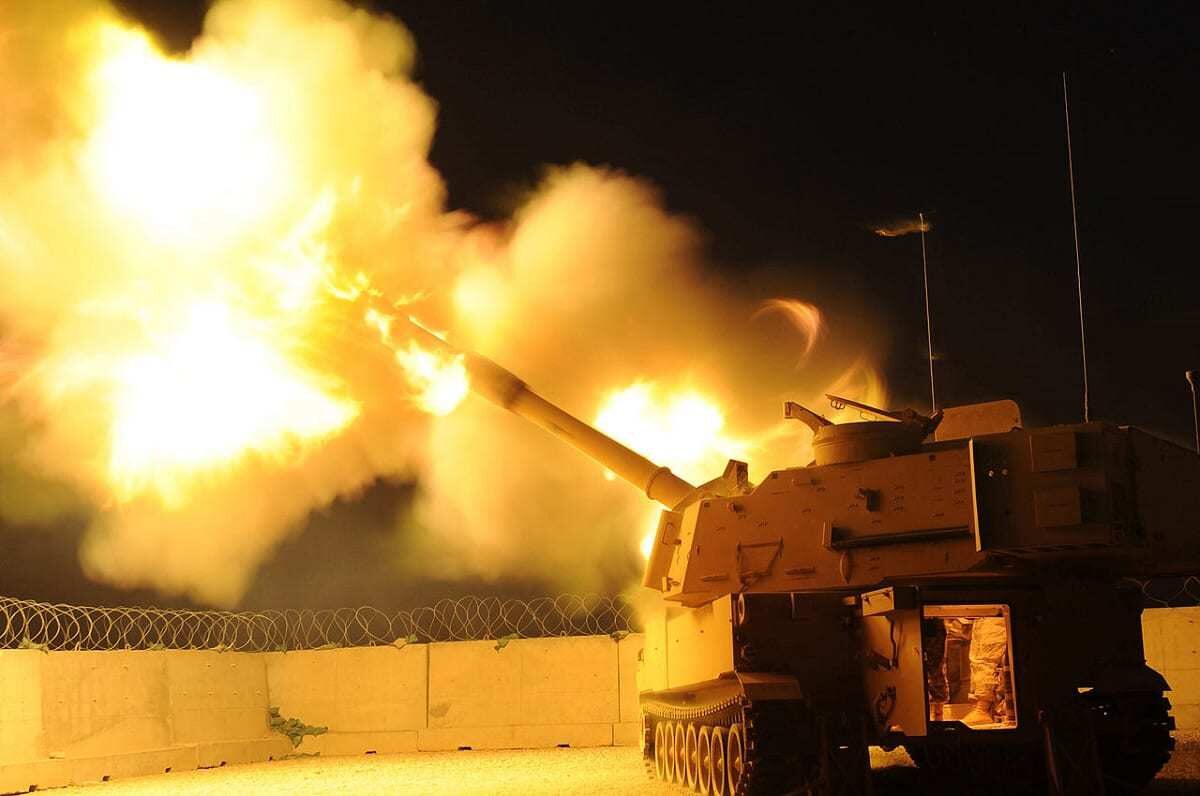 Col. David Mansfield, 407th Air Expeditionary Group commander fires an illumination round from a M-109A6 Paladin Self Propelled Howitzer here June 20 in support of Iraqi Police patrolling Nasiriyah, Iraq. The Soldiers of the 3-319th Airborne Field Artillery Regiment, 1st Brigade Combat Team, 82nd Airborne Division, regularly support Iraqi Police with illumination to help them secure the city. Colonel Mansfield was given a tour, a system capability brief and the opportunity to fire, under close Soldier supervision, so that he can better inform Airmen about the "outgoing fire" missions and thunderous explosions heard almost nightly here.

Ukraine War Update: Russia Hammers Kyiv Despite Running Low On Ammunition – The Russian military unleashed missile attacks across Ukraine on Saturday, hitting the capital of Kyiv with the heaviest barrage of missiles in weeks. And with the indiscriminate targeting of civilian areas, the strikes hit both an apartment building as well as a kindergarten.

These strikes killed at least one person and wounded six more. Ukrainian firefighters rushed to put out the fire in a nine-story apartment building. “They have pulled out a seven-year-old girl. She is alive. Now they’re trying to rescue her mother,” Kyiv’s Mayor Vitali Klitschko said

“There are people under the rubble,” Klitschko added on the Telegram messaging app. He also stated that several people had been hospitalized. The strikes took place as leaders of the G7 met in Germany to consider whether to levy new sanctions against Moscow.

President Joe Biden condemned the strikes when asked if he had any reaction to the latest attacks by Russia. “Yes, it’s more of their barbarism,” Biden said. Russia conducted the airstrikes from the west, south, and north from Belarus.

With the Ukrainians claiming that Russia is trying to drag Belarus into the war,  just a few hours after the airstrikes Russian President Putin promised Belarus that he’d send them missiles that are equipped with nuclear warheads.

Ukraine’s Defense Ministry’s Main Intelligence Directorate said “missile strikes from the territory of Belarus are a large-scale provocation of the Russian Federation in order to further involve Belarus in the war against Ukraine.”

‘”Russian bombers hit directly from the territory of Belarus. Six Tu-22M3 aircraft were involved, which launched 12 Kh-22 cruise missiles.” The Directorate added that the missiles had been launched from airspace above the district of Petrikov in southern Belarus.

“After launching the missiles, they returned to Shaikovka airfield in Russia. The strike was launched on Kyiv, Chernihiv and Sumy regions. This is the first case of an airstrike on Ukraine directly from the territory of Belarus,” the Directorate said.

The Russian military may soon have to slow down or even stop their offensive in the Donbas of eastern Ukraine due to heavy casualties and a general lack of ammunition, according to Western intelligence military experts.

Despite Russian forces concentrating artillery fire, as well as air and missile strike advances against Ukrainian forces, many analysts believe that Russian forces are running short of ammunition, particularly artillery.

One senior Western official told the Washington Post that the slow Russian advance that finally took Severodonetsk on Friday, when Ukrainian troops withdrew, is dependent on massive artillery strikes that can’t be sustained for long, the way they are burning through ammunition.

Ukraine characterized its pullback from the city as a “tactical withdrawal” to fight from higher ground in Lysychansk on the opposite bank of the Siverskyi Donets river. The Russians claim that they already have troops fighting inside of the city.

One Russian blogger said that manpower shortages are taking a toll on Moscow’s “special military operation and that they’d need upwards of 500,000 troops which they can’t field without a national mobilization, something Putin thus far has not opted to do.”

The Ukrainian deputy defense minister Anna Malyar has said that the Russian military is under pressure to bring all of Luhansk under Russian control by Sunday, perhaps explaining the lack of artillery ammunition.

The Russians, overconfident of their ability to finish the war in days, didn’t ramp up ammunition production. The Ukrainians too, have almost run out of their Soviet-era ammunition from their older weapons.

In this article:Ammo, Donbas, NATO, Russia, Ukraine, War in Ukraine