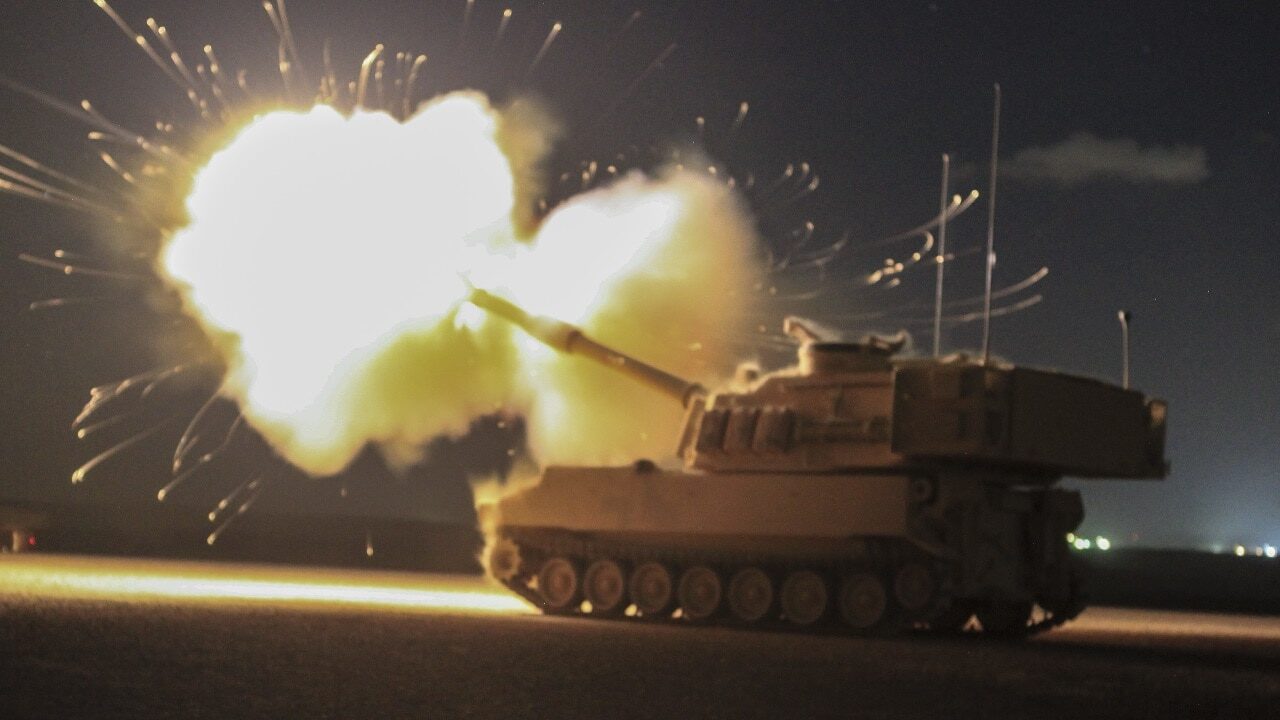 A Paladin M109 Alpha-6 Howitzer, fires an illumination round during a night fire exercise in support of Eager Lion 2016, May 23, 2016 at Al Zarqa, Jordan. Eager Lion 16 is a bi-lateral exercise in the Hashemite Kingdom of Jordan between the Jordanian Armed Forces and the U.S. Military designed to strengthen relationships and interoperability beween partner nations while conducting contingency operations. (U.S Army photo by Spc. Kevin Kim/ Released)

On Sunday, NATO Secretary-General Jens Stoltenberg said “nobody knows” how long the Russian war in Ukraine might last, but, he added, “we need to be prepared for it to last years.” Retired Army General Jack Keane told a Fox & Friends audience on Monday that Ukraine had the ability, will, and troops to win the war. All they lacked, he claimed, “is the weapons to do it.”

The historical record and a growing mountain of evidence, however, suggest that such claims are unrealistically optimistic, as there is a growing possibility that the Ukrainian Army may be months away from losing the ability to defend the country.

If the two sides do not end the war through negotiations in the coming months, it is likely – not just possible – that Ukraine will lose the war.

It is time to strip off the rose-colored glasses much of the West has worn when looking at Russia’s war of aggression against Ukraine and acknowledge the cold, hard truth: the Russians are on course to win. The longer we traffic in the fiction that Ukraine still has a chance, the more Ukrainian civilians will be killed, the more cities will be destroyed, and the higher the probability that Russia seizes yet more territory before a negotiated settlement can end the fighting – potentially including Kyiv. You’d never know that, however, listening to high-ranking current and former officials in the West.

Secretary of Defense Lloyd Austin, hosting a 50-nation Ukraine Defense Contact Group in Brussels, told his fellow defense secretaries last week that the West “can’t afford to let up,” in supplying Ukraine with heavy weapons in its war against Russia.  Implied was the expectation that supplying heavy weapons to Ukraine will turn the tide of war and allow Kyiv to win. A study of military history, my own combat experience, and an honest assessment of the current state of play in the Russia-Ukraine War all point to the likelihood that Secretary Austin is wrong.

One of the biggest reasons the Allies defeated Nazi Germany in both North Africa in 1943 and in Normandy after the D-Day landings were because the Allies had a clear advantage in air power.  Field In July 1944, German Marshal Guenther A. F. von Kluge complained to Hitler that “in the face of the total enemy air superiority, we can adopt no tactics to compensate for the annihilating power of air except to retire from the battlefield.” Germany still had considerable numbers of infantry and panzer divisions, but virtually nothing could move on the ground that wasn’t destroyed from the air. Once the Allies had air superiority, it was only a matter of time before Germany lost.

I was part of the U.S. VII Corps armored force that drove north from Saudi Arabia in early 1991 to attack Iraqi Republican Guard armored divisions. Prior to starting our ground attack, the Allied force conducted 38 straight days of a massive air attack. The U.S. Air Force took out the majority of Baghdad’s air defense capacity in the first hours, and subsequently made it nearly impossible for their ground forces to maneuver without getting bombed from the air.

When my unit attacked the Republican Guard forces in the north of Kuwait, we were free of any concern of enemy air strikes and obliterated our enemy. The advantages U.S. Forces had in the air against the Germans in 1944 and against Iraq in 1991 are similar to the advantages Russia currently possesses over Ukraine. After recovering from their opening phase disasters, Russian air forces operate with near-impunity in the air and constrain any movement from Ukrainian troops on the ground. The UAF’s troubles, however, are far from limited to the air.

In just the last few weeks, a number of Ukrainian officials have begun conceding publicly that the casualties to its troops are far greater than had previously been admitted. They are also unsustainably high. Ukrainian Presidential Advisor David Arakhamia said that the UAF was suffering up to 1,000 casualties per day, sometimes losing as many as 500 killed in a 24 hour period. Adding to Kyiv’s woes, the losses in military kit are even more dire.

Ukrainian Brig. Gen. Volodymyr Karpenko, the Land Forces Logistics Commander of the UAF, publicly acknowledged that through nearly four months of fighting, his troops had lost “approximately 50%” of their pre-war stocks of heavy weapons, claiming that “1,300 infantry fighting vehicles have been lost, 400 tanks, 700 artillery systems.”

Those numbers of personnel and equipment losses are not surprising in light of the fact that Russia has a 20-1 advantage over Ukraine in artillery, 40-1 advantage in artillery and rocket ammunition, and a daily air sortie rate of approximately 300 to five. If every heavy weapon committed to Ukraine by the West were delivered immediately, it would not represent one tenth of the UAF losses – and that they continue to lose on a daily basis, including the 155mm howitzers provided by the United States.

In every measurable metric that has historically determined the winner and loser on the battlefield, Ukraine is at a major deficit. As should be painfully obvious, there is no rational basis to hope that Ukraine will stop its bleeding of personnel and equipment and win the war against Russia. To continue giving emotional support to Ukrainian leaders and people, encouraging them to keep fighting, is to set them up for bitter – and potentially catastrophic – failure.

The truth is, all objective evidence leads to the conclusion that Ukraine is likely to lose the war. Given the scale of their losses since 24 February, it is unclear whether the UAF will be able to sustain even defensive operations in another four months. There is nothing to suggest that Russia will not be able to continue saturating Ukrainian positions, especially in the Donbas, with upwards of 70,000 artillery shells and rockets per day. No force can endure such withering bombardment for months on end without eventually buckling.

It is absolutely understandable how Ukrainian people detest what Putin’s forces have done to their country and entirely reasonable they would want to drive every last Russian soldier from their soil. But for the West to keep alive the hopes that eventually enough weapons will come to save the Ukrainians – when help of that magnitude is clearly not coming – is to cruelly keep alive a hope that is highly unlikely to ever materialize.

If Kyiv refuses to acknowledge its perilous state and continues fighting, its not out of the question that Russia’s advantages in rockets, artillery, and air strikes could eventually result in the outright defeat of the UAF. Whether Zelensky and his people choose that path is entirely up to them. But the West should be honest about their prospects – and acknowledge thousands of modern Western tanks and artillery pieces are not coming.

In this article:Donbas, featured, Russia, Ukraine, War in Ukraine