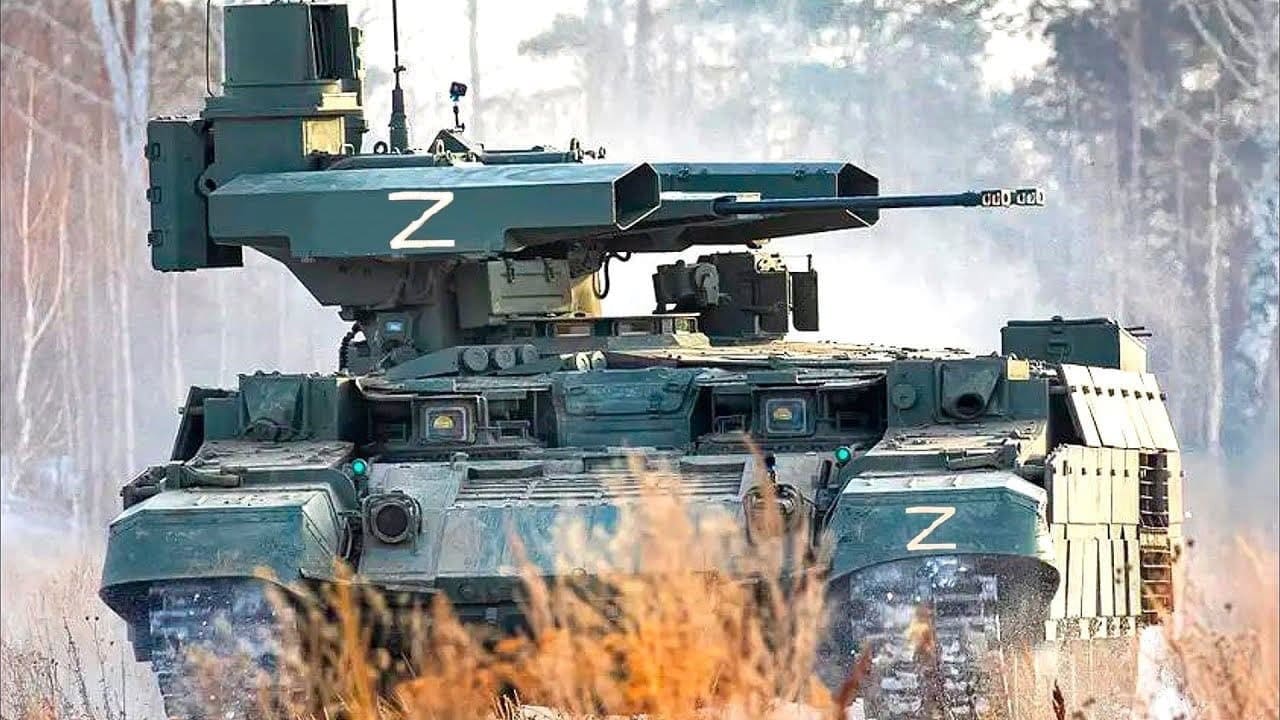 While Russia’s BMPT Terminator was designed as to serve a relatively unexplored role as an armored fighting vehicle specifically designed to support Russian tanks, its flashy name ultimately is what has brought it notoriety in the West. While it is difficult to assess its true combat performance today, external observers will likely learn much more about the BMPT over the course of its deployment to Ukraine, where it has likely already seen combat.

Specs of the BMPT Terminator

Russia’s BMPT Terminator is tailor-built for its intended role, which has no clear analog in Western armies, who tend to rely on combined-armed forces to ensure that their tanks are fully supported. The vehicle is equipped with a variety of weapons for an even wider variety of targets, which includes four Ataka anti-tank missiles, two AG-17D grenade launchers, and one coaxial 7.62 mm PKTM machine gun. However, newer variants of the Terminator dispense with the grenade launchers and are operated by a crew of three, rather than the default configuration’s crew of five. The primary armament of the vehicle is its twin 30mm autocannons, which can be loaded with different types of ammunition simultaneously.

Defensively speaking, the Terminator is equipped with both reactive and slat armor to defend against anti-tank weapon attacks.

Development of the BMPT Terminator

While the BMPT Terminator is marketed as an advanced and cost-effective leader in a new class of tank support vehicles, its roots are firmly planted in the former Soviet Union. So much so, in fact, that the Terminator’s systems are built on the chassis of a T-72 tank. Development of the BMPT Terminator was initially sparked by heavy armor losses taken by unsupported Soviet and then Russian columns in Afghanistan in the 1980s and in Chechnya in the First Chechen War of the 1990s. On the eve of Russia’s invasion Ukraine, Russia only had a handful of Terminators in service, which was organized in the form of a company of nine vehicles attached to the 90th Guards Tank Division. The BMPT Terminator is manufactured by Russia’s Uralvagonzavod, which also manufactures a variety of other Russian armored vehicles such as the T-90 and T-72.

The BMPT Terminator’s Deployment to Ukraine

Initially officially announced by Russian state media in mid-May, Russian BMPT Terminators have reportedly been sent into Ukraine to take part in Russia’s invasion. A focal point for the deployment of Russian Terminators in fighting over the Ukrainian city of Sieverodonetsk, which has become a major urban battle within Russia’s ongoing attempt to shore up its strategic position in Donbas. Although it has previously seen limited employment in Chechnya in 2018 and in Syria in 2017 (according to Russian media), it is hard to definitively explain Moscow’s early reluctance to deploy the Terminator until the current phase of the war, although it is likely that Russian leaders sought to avoid any embarrassing losses of the vehicle.

Does the Terminator Have a Future?

Since the Terminator is designed to fill a niche role in modern warfare that has no direct analogs in history, Russia’s experience employing the Terminator on the battlefield in Ukraine will likely determine the future of the vehicle. Given Russian interest in exporting the BMPT Terminator to partner countries around the world such as Kazakhstan, such a trial-by-fire will undoubtedly shape how the support vehicle is received by prospective foreign customers.

Either way, however, the BMPT Terminator is unlikely to make a significant battlefield difference in Ukraine, given how few of them remain in operation.