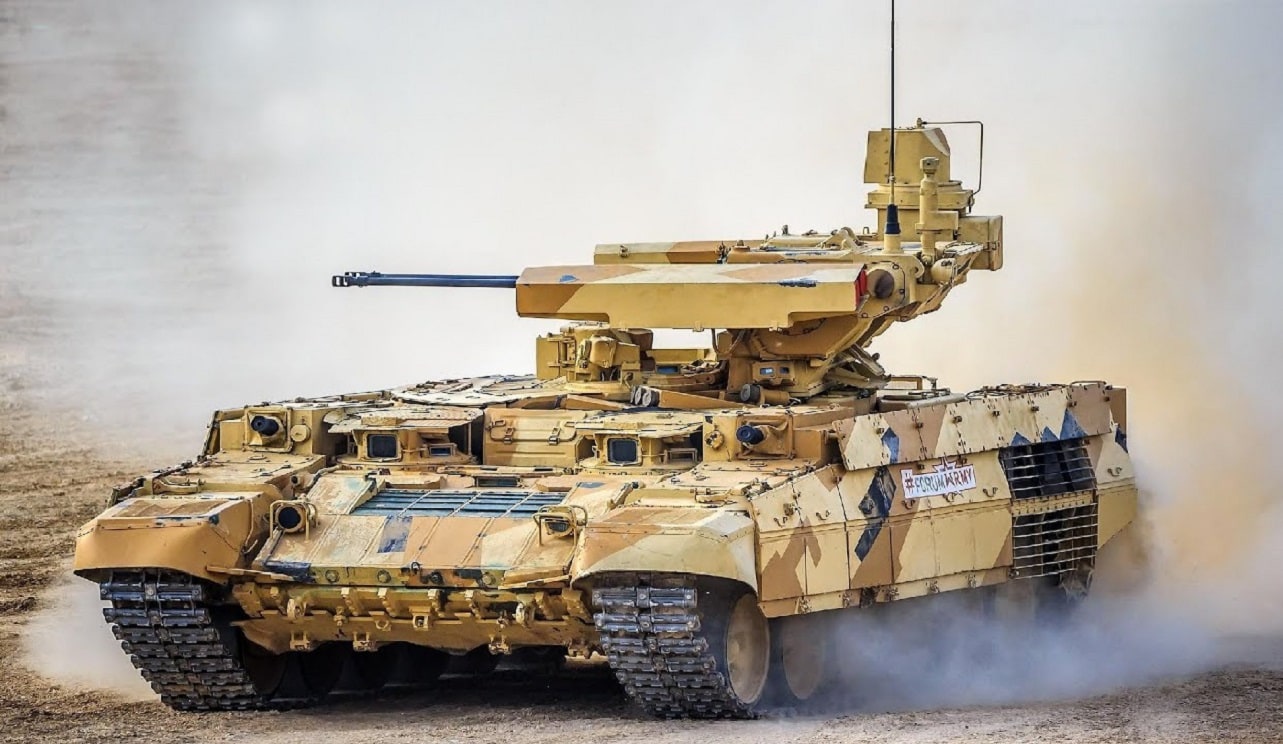 The first Terminator company – equipped with nine BMPT-72s – was assigned to the 90th Guards Tank Division, which is stationed in the Sverdlovsk and Chelyabinsk areas of the Urals region in Central Russia, according to Russian news agency TASS.

While the BMPT-72 has been tested in Syria, equipping a regular army division with the vehicles also known as the Terminator 2 – indicates that the Russian Army believes the vehicle is ready for combat.

“The first regular company of nine tank support fighting vehicles in the Russian armed forces was introduced into the table of organization and equipment of a tank regiment of the military district’s armored division,” said Colonel-General Alexander Lapin, commander of the Central Military District.

The Terminators will participate in major exercises next June, Lapin said. “I am deeply convinced that this materiel will successfully accomplish combat tasks in combined arms warfare and in compliance with modern requirements as the most effective weapon both to support tanks and address a broad range of missions in the mountains and in populated localities.”

The BMPT-72 is considered a “tank support combat vehicle,” which in this case means a tank is designed to support other tanks, as compared to traditional main battle tanks (MBT). The Terminator is built on the chassis of the ubiquitous T-72 main battle tank, of which 25,000 were built since the 1970s.  But instead of mounting a 125-millimeter cannon in a big turret, the BMPT-72 has a small turret armed with an array of weapons:  two 30-millimeter cannon, four Ataka antitank missiles, two rapid-fire 30-millimeter grenade launchers, and a heavy machine gun.

This diverse suite of weapons allows the Terminator to engage multiple types of targets, including tanks, infantry, fortifications, helicopters and low-flying aircraft. At the same time, using a tank chassis offers the heavy armored protection found on tank hulls, as well as the off-road mobility of a fully tracked vehicle.

The genesis of the Terminator concept was the heavy losses suffered by Soviet armor in Afghanistan in the 1980s and Chechnya in the 1990s, On New Year’s Eve 1994, large columns of Russian tanks and armored personnel carriers roared into the Chechen capital of Grozny to suppress pro-independence insurgents. Ambushed by Chechen fighters armed with anti-tank rockets fired from buildings into the streets below, hundreds of Russian armored vehicles were destroyed.

This should not have been a surprise, least of all to the Russians who had ambushed German tanks in city battles such as Stalingrad. Indeed, numerous conflicts – from World War II to Vietnam and the Iran-Iraq War – have shown the vulnerability of armored vehicles bereft of support from infantry and artillery, especially in urban combat. Russian planners concluded that the solution wasn’t to use lightly armored vehicles – such as self-propelled anti-aircraft guns – for fire support. The BMPT-72 is meant to be a support vehicle with enough armor protection to accompany MBTs like the T-80, T-90, regular T-72s, and the new T-14 Armata into combat. At the same time, its rapid-fire cannon and grenade launchers can suppress infantry and anti-tank weapons that threaten regular tanks, while its anti-tank missiles can pick off enemy tanks.

The concept of a support tank isn’t exactly new. In World War II, the U.S. Army equipped some M4 Sherman tanks with low-velocity 105-millimeter howitzers for extra firepower against infantry and fortifications, while the Soviets mounted a 152-millimeter howitzer on a KV-1 heavy tank to create the SU-152 assault gun. Today’s Israel Defense Forces have the Namur, which is a Merkava 1 tank stripped of its turret, and converted into a heavily armored troop carrier.

The Terminator comes as Russia is testing the Armata, a next-generation family of armored vehicles – including a main battle tank and an armored personnel carrier – with advanced features such as an unmanned turret. One question will be whether the Terminator will be exported. Assuming it has commonality with the regular T-72, which has been used by more than 40 countries, than exporting the BMPT-72 might be easier than selling an entirely new vehicle like the Armata.

A seasoned defense and national security writer and expert, Michael Peck is a contributing writer for Forbes. His work has appeared in Foreign Policy Magazine, Defense News, The National Interest and other publications. He can be found on Twitter and Linkedin.