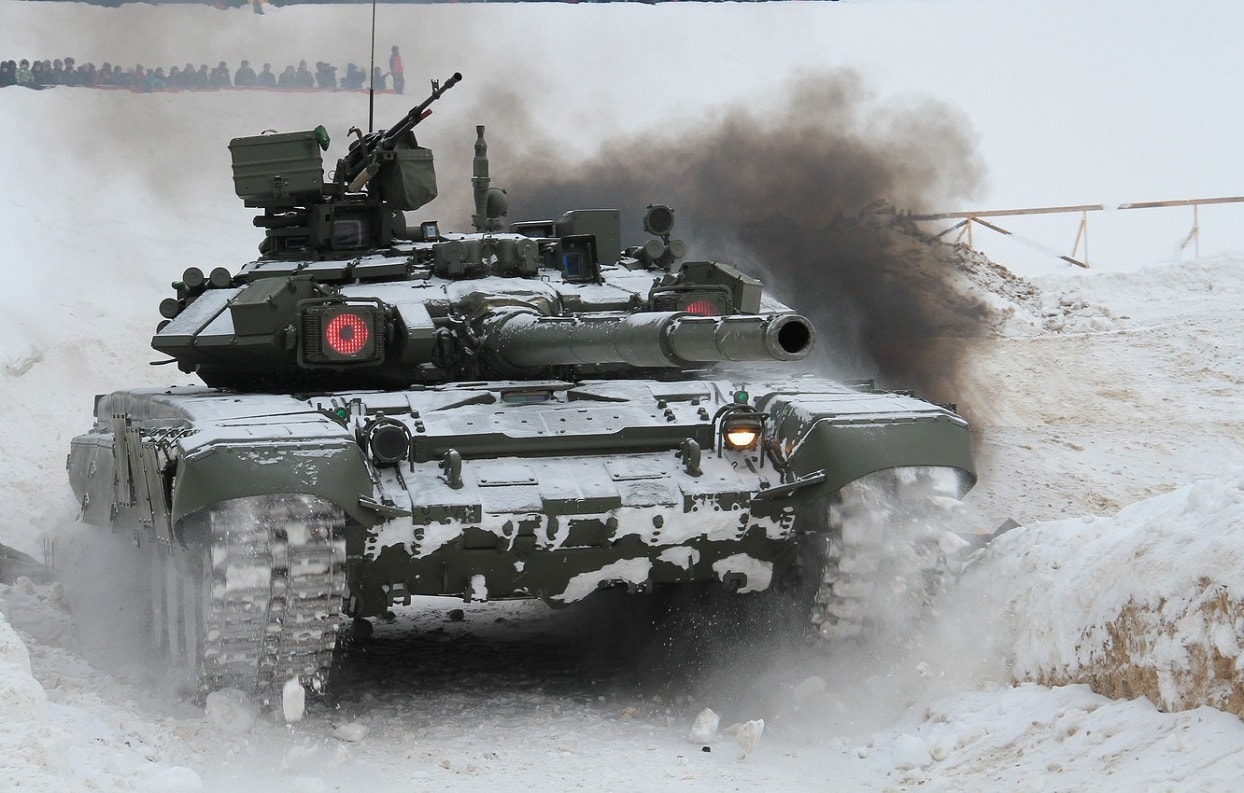 Until Russian T-14 Armatas Are Deployed in Numbers, the T-90 Tank Will Have to Do: The T-14 Armata, Russia’s next-generation main battle tank, has not been deployed in substantial numbers. That means the Russians will have to depend on older but quite powerful T-90 tanks as their current advanced platform for armored maneuver warfare. However, the T-90 had a mixed record up against anti-tank missiles when it was fielded in Syria. There is a question about how effective it can guard against the TOW and Javelin missiles. The next question is obvious: Is the T-90 itself outdated?

The T-90 was designed to take over from the T-80 and T-72 tanks, which truly never occurred. Both of these tanks have seen a number of different upgrades over the years.

T-90 Armor Has Added Protection from an Automatic Countermeasures System

The armor is the standard Kontakt-5 explosive reactive armor blocks that upgraded T-72s use. This is to protect against armor-piercing sabot rounds.

The T-90M has the newer Relikt explosive reactive armor, but there are only estimated to be 20 T-90Ms in service, although all T-90s are expected to be enhanced by the ‘M’ upgrade.

Protection is augmented by the Shtora-1 countermeasures system to spoof enemy anti-tank missiles. This is what sets the T-90 apart from the T-72 and T-80. The system sends out infrared signals that jam inbound missiles. If the tank is lit up by a laser, Shtora-1 automatically sends out a warning and releases smoke grenades to mask movement.

Is the Shtora-1 Outdated?

There is a question of whether some components of the Shtora-1 suite of countermeasures are obsolete. The Russians say the system was effective in Syria against militants using American TOW 2A and Chinese HJ-8 anti-tank missiles. But when the Syrian Army used 30 T-90 tanks sent by Russia in 2016 and 2017, the system seemed faulty. 1945 reported that five were taken out by rebel missiles and further analysis showed that the Shtora-1 countermeasures would not be effective against Javelin anti-tank missiles.

The latest T-90M tanks are reportedly not going to use the infrared countermeasures from the Shtora-1.

Improved Gun and Engines on the T-90M and T-90MS

Like the upgraded T-72 and T-80, the T-90 has the latest 2A46M 125 mm smoothbore gun with 22 rounds in the autoloader and AT-11 Sniper-B anti-tank guided missiles. The T-90MS export model has an improved gun with a longer range and can carry 40 rounds of ammunition.

Thus, the base T-90 has questions about its power, speed, and survivability against anti-tank missiles.

To be sure, well-trained and elite tank crews can overcome these shortcomings. The updated T-90MS and T-90M mostly solve these problems with a better engine including an automatic transmission and improved fire control systems. With that said, the Russians are looking to update the base model T-90 from the early 1990s to become a T-90M or risk having outdated T-90s from 1993.