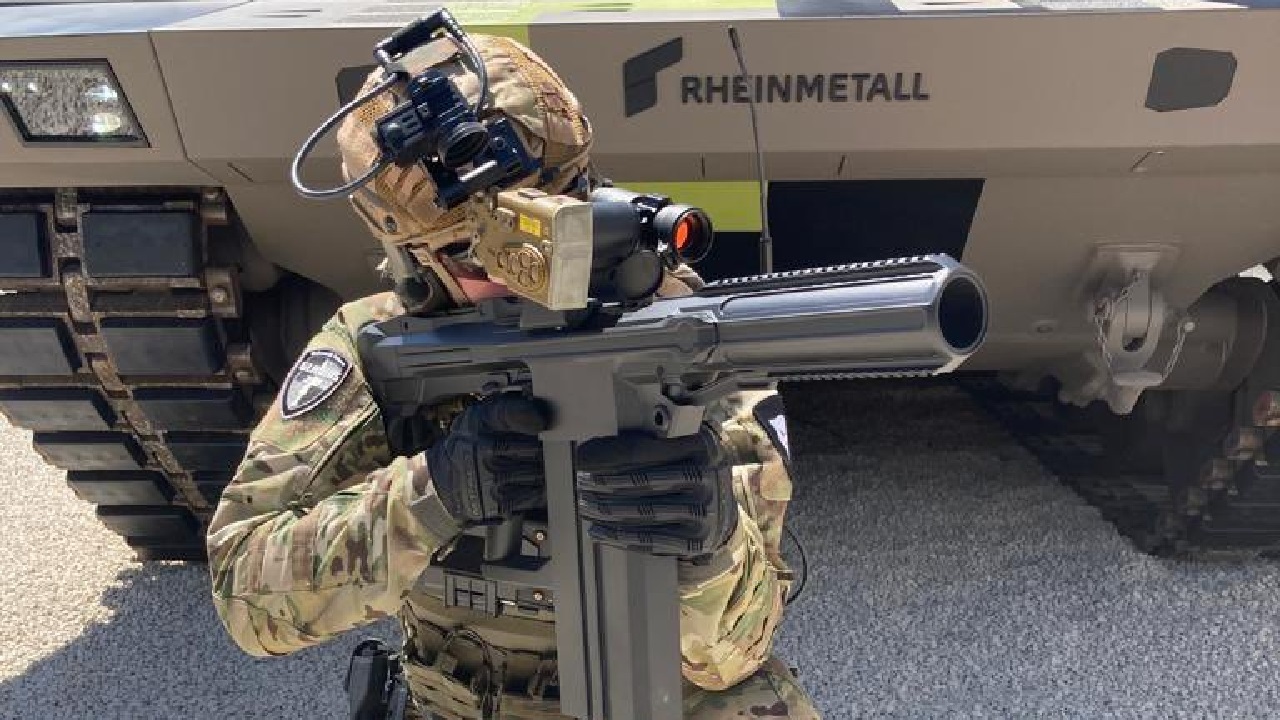 It looks like something out of the gritty Aliens sci-fi horror film or the campy Starship Troopers flick. I’m talking about a newfangled grenade launcher that fires a 40mm round to menace the enemy’s infantry. The Squad Support Weapon 40 shoots grenades out of a long magazine from an automatic, compact shoulder-fired gun. The Squad Support Weapon (SSW40) is another technological marvel that was featured at the recent Eurosatory Defense & Security Expo in Paris. This show has taken on more interest and scrutiny since the Russian invasion of Ukraine.

German arms maker Rheinmetall, known more for its new Panther tanks and unmanned ground vehicles, is the producer of the SSW40. Rheinmetall had some breathless commentary about the SSW40’s controls and size in a news release, although it won’t be completely ready for another year. “Both weight, dimensions and handling of the SSW40 are similar to assault rifles,” the company says.

The SSW40 has a surprising range of over half a mile. It boasts a flat trajectory and high velocity that delivers grenades in deadly salvoes due to the quick-loading automatic action. The weapon can fire high-explosive grenades and penetrating anti-tank rounds, plus door-busting, illumination, and air-bursting rounds.

Keep Their Heads Down

The grenade launcher was originally developed for the Puma infantry fighting vehicle. Rheinmetall was able to devise a system for the individual soldier that should help keep the enemy suppressed during combat.

Magazine changes are fast. A laser aiming designator can be added as well as other sights, and the weapon is compatible with 40mm low-velocity grenades already on the market.

Can It Pass the Recoil Test?

It’s not clear what the recoil is like or if it is a true fully-automatic grenade launcher like the much heavier Mk-19 automatic that needs a tripod or vehicle mount. Rheinmetall says the “recoil-reducing and self-regulating recoil system” makes it easy to fire.

The SSW40 looks like an improved version of the Hydra shoulder-fired grenade launcher that was introduced by Rheinmetall and Milkor USA in 2012. Milkor is known for the grenade launchers with revolving magazines it makes for the U.S. Marine Corps. This model differs from the straight magazine of the SSW40.

Grenade launchers are popular in infantry platoons. Known for suppressing enemy troops while a maneuver element of soldiers moves toward the objective, the grenade launcher has been in vogue since the Vietnam War. No infantry unit would go to war without it, especially during conflicts in Iraq and Afghanistan.

Could It Make an Appearance in Ukraine?

I don’t recall the Ukrainians specifically requesting shoulder-fired automatic grenade launchers to fight the Russians, but the United States has sent the much larger Mk-19 to Kyiv. Some 40-mm M320 single-shot grenade launchers have also been seen on battlefields in Ukraine. While not ready yet, the SSW40 could come in handy to use against the Russians someday – provided the war continues at its sluggish, meat-grinding pace. Its range and speed of fire, plus the ability to take on medium-weight tracked vehicles would make it valuable.

The Russo-Ukraine war has endured its share of street-to-street fighting. This kind of urban combat is tailor-made for grenade launchers. Tanks cannot often fire at targets in buildings that are several stories high, but grenade launchers are well-suited for the task. Another valuable aspect of the SSW40 is the ability to have different purposed grenades in additional magazines that are ready to be loaded and fired by troops. One soldier could be tasked with taking out vehicles with his ammunition load and another could focus on anti-personnel. The SSW40 is thus a diverse weapon and could make a difference on a real battlefield rather than serving as a prop on the silver screen. Let’s see if it has any customers.