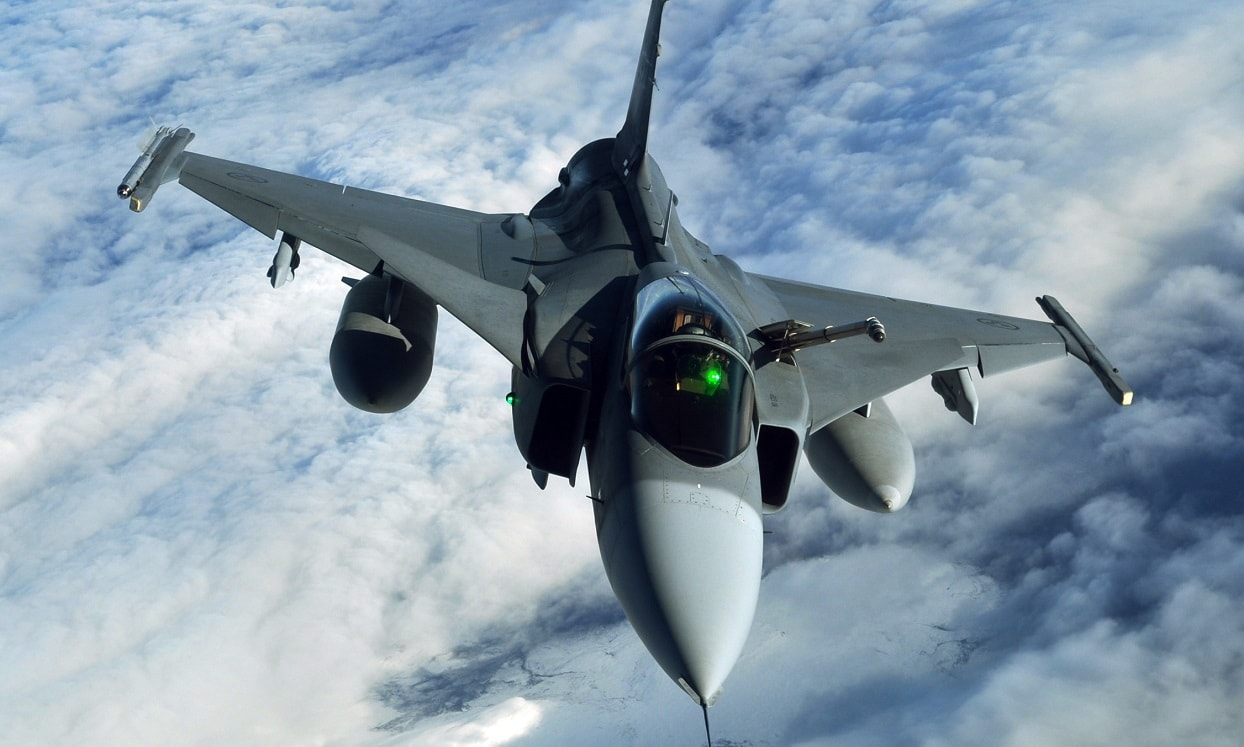 A Swedish JAS-39 Gripen returns to the play areas of the Arctic Challenge exercise Sept. 24, 2013, over Norway, after taking on fuel from a U.S. Air Force KC-135R Stratotanker. The JAS-39, in coordination with aircraft from other nations, formed a Blue assault force, which had to bypass or neutralize an opposing Red force attempting to stop them from an overall objective outlined in the day's scenario. (U.S. Air Force photo by 1st Lt. Christopher Mesnard/Released)

The latest news out of Europe has it that Turkey has lifted its objection to Finnish and Swedish membership in NATO, a.k.a. the Atlantic Alliance. NATO makes decisions on the principle of unanimity, meaning the Turkish government could blockade the two new applicants because it claims they’re soft on Kurdish separatism. Evidently, Ankara extracted enough concessions from Helsinki and Stockholm to appease Turkish sentiment.

So to all appearances, their admission to the alliance is a done deal. Let’s look at the cultural, geopolitical, and operational dimensions of adding new Nordic members to NATO’s northern rampart.

First, culture. Human nature being what it is, it often takes a sharp blow to jar individuals and groups out of long-accustomed ways of thinking, feeling, and doing. Few of us relish change. Wittingly or not, Vladimir Putin has shown how you break a cultural logjam overnight, in this case the culture of Finnish and Swedish neutrality. The Russian invasion of Ukraine has done just that—raising the specter of Russian hosts on the march anywhere along the Russian frontier with Western Europe, including, potentially, along Nordic borders.

The prospect of invasion and conquest almost instantly concentrated minds among the Baltic nations. No one wants to be a Russian satrapy.

U.S. Air Force colonel and strategist John Boyd would nod knowingly. Boyd urged fellow fighter pilots—and warriors from all domains—to seize control of the surroundings and change them abruptly and radically around an antagonist. Spring a “fast transient” on the opponent, he advised, and you can disorient him and wrest away tactical, operational, or even strategic advantages. The likelihood of your victory brightens as the opponent flounders trying to make sense of bewildering circumstances.

Trouble is, Putin already unleashed his fast and menacing transient against Ukraine, whose defenders withstood it better than most observers expected. Russian aggression stunned Russia’s neighbors as well, but the fact that the blow fell elsewhere granted Stockholm and Helsinki time to make sense of Europe’s new normal and adapt to it. They used that respite to seek NATO membership to provide for their own defense.

Boyd is right: a fast transient is a powerful strategic implement. But it is no guarantee of success, especially if mishandled.

Second, geopolitics. Admitting Sweden and Finland to the alliance adds seacoast and waters to defend in the Baltic Sea, a waterway that constitutes part of geopolitics maven Nicholas Spykman’s “girdle of marginal seas” washing against the Eurasian periphery. These are expanses any bluewater sea power—the United States, or Great Britain in its imperial heyday—must command in order to radiate military and diplomatic influence into the Eurasian supercontinent. And they are increasingly contested expanses as the likes of China, Russia, and Iran eye their nautical surroundings.

Local hegemons reason that if they can deny U.S. and allied sea and air forces access to this geographic space—or at least raise the price of entry to a dismaying level—they can restrict extraregional influence on Eurasian affairs. They can unravel Spykman’s balancing logic to their own benefit.

Yet their success is far from foreordained. Expanding NATO to encompass all Nordic powers ensconces the alliance in a commanding maritime geographic position. It cramps Russian access to the Baltic Sea—let alone the North Sea, or the Atlantic high seas—from the port of St. Petersburg. In short, Finnish and Swedish accession to NATO will give the Arctic and Baltic a Cold War feel. Except doubly so. Back then the Soviet Union squared off against NATO powers and neutrals friendly to NATO. Now post-Soviet Russia will square off against a unified bloc, including former Soviet republics and neutrals, that pays fealty to the Atlantic Alliance.

And the new accessions have implications—albeit less direct—for polar affairs. While Finland and Sweden don’t front on the Arctic Ocean, they are members of the Arctic Council and thus see vital interests in the polar demesne. Admitting them to NATO will divide the council membership between Russia and a bloc of NATO members. Moscow will glare across Arctic waters at a seacoast inhabited entirely by the Western alliance. Here too, symmetrical, one-on-one competition between crudely comparable rivals verges on a foregone conclusion.

To outflank its weakness at sea, Moscow will probably resort to ground, air, and missile power. And indeed it has already threatened to station missiles, perhaps armed with nuclear warheads, along Russia’s frontiers with the new allies. That’s a less-than-subtle warning not to encumber the Russian Navy’s access to the sea.

What does the future hold? We can gaze through a glass darkly, gleaning insights into likely dynamics in Baltic and Arctic affairs, by comparing the geopolitics of these bodies of water to similar semi-enclosed expanses, past and present. For instance, the relatively simple competitive geometry taking shape in northern waters stands in sharp contrast to the Mediterranean Sea, where a multitude of local coastal states, some allied, some not, jostle to protect their interests. Meanwhile powerful outsiders like America and Russia maintain a presence in the middle sea to advance purposes of their own.

This is a multidimensional, multivariate strategic competition.

Or, for that matter, the competitive geometry in northern climes stands in sharp contrast to the embattled South China Sea, where one local titan, China, confronts a host of vastly outmatched neighbors while powerful outsiders like Japan, Australia, and the United States try to help the weak preserve some semblance of balance against the strong and domineering. Juxtaposing geopolitical regions like the Baltic and Arctic against others—the Mediterranean, the Black Sea, the South China Sea, or for that matter the Caribbean Sea—could furnish clues to what the northerly future holds.

NATO should peer through this useful if imperfect spyglass. Study the map—and study naval history.

And third, operations, doctrine, and force design. NATO forces have long operated in company with mariners from Sweden and Finland, sharing best practices in naval warfare. I did so myself while on sea duty, and that has been a distressingly long time ago now. So it’s important not to overstate the benefits of formal alliance membership for the two erstwhile neutrals. These benefits are nonetheless real, and they apply throughout Eurasia’s marginal seas.

Think about it. Nordic navies are accustomed to prowling amid congested and intricate offshore terrain in small yet heavy-hitting craft to make things tough on a stronger adversary like the Russian Navy. They have much to teach. Intimate knowledge of how they conduct business in confined waters, doing more with less, would pay dividends for the U.S. Navy, Marine Corps, Coast Guard, and affiliated joint forces, not to mention allied forces. After all, these are cramped quarters bearing a striking resemblance to potential battlegrounds in the Indo-Pacific.

The Western Pacific in particular is a contested zone where U.S. and allied forces envision prosecuting newish strategic concepts like expeditionary advanced base operations, distributed maritime operations, and the like. And while U.S. commanders seldom say the quiet part out loud, they tacitly admit that the allies will fight as the lesser combatant against China’s People’s Liberation Army—at least at the outset of a hot war. They have much to learn.

Admitting Sweden and Finland to NATO brings liabilities with it, notably more real estate to defend against a nearby predator. But in geographic and operational terms, you have to like the notion of enlarging the circle of allies.