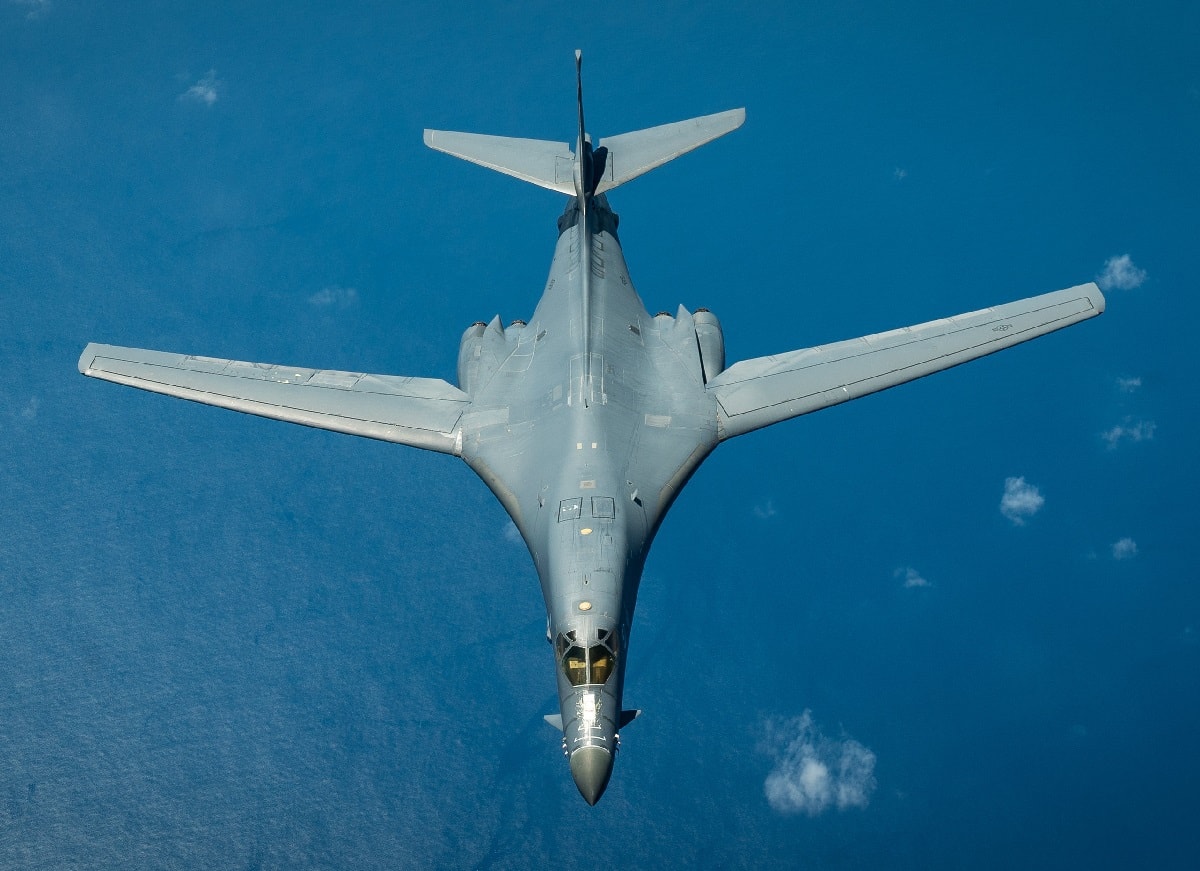 A U.S. Air Force B-1B Lancer assigned to the 37th Expeditionary Bomb Squadron, deployed from Ellsworth Air Force Base, S.D. to Andersen AFB, Guam, flies a training mission over the Pacific Ocean Aug. 16, 2017. During the mission two B-1s were joined by Japan Air Self-Defense Force F-15s in the vicinity of the Sankaku Islands. These training flights with Japan demonstrate the solidarity and resolve we share with our allies to preserve peace and security in the Indo-Asia-Pacific. (U.S. Air Force photo/Staff Sgt. Joshua Smoot)

The B-1B Lancer and its pilots are back where they want to be – flying in a critical area of operations and training for a potential conflict in East Asia that would require teamwork with allies such as Japan and South Korea. Four B-1Bs have deployed to Andersen Air Force Base in Guam for work flying in tandem with Japanese pilots from their Self-Defense Force in exercises that are meant to foster a feeling of pride in teambuilding.

AirForceMag.com spoke to Air Force Lieutenant Colonel Jeffrey Carter, a B-1 pilot from the 34th Bomb Squadron at Ellsworth Air Force Base, South Dakota. Carter is fired up about the deployment and is good-natured about the partnership with Japanese pilots.

“When we see each other through the cockpit windows, and we’re just doing our high-fives and fist bumps in the air, it seems like you’re just flying with someone else in your squadron,” he added. “And that’s kind of, I think, the biggest improvement with all this integration.”

Should the B-1B Be Permanently Deployed in Guam?

This is fine for the Air Force, but Andersen Air Force Base in Guam used to have permanently deployed bombers over the last 16 years. Now the B-1Bs rotate with other bombers such as the B-52 and B-2 for one to three-month deployments. The permanently based policy for bombers outside the United States ended in 2020.

How Important Is Guam?

This is a significant development. Guam is a strategic and decisive territory for the U.S. military. It is a jumping off point for any offensive maneuvers necessitated by a revanchist China and North Korea, whose military practices are unpredictable. The upside of permanent nuclear-equipped bomber deployment was that Guam had a high level of operational tempo that would give pilots and crew a taste of readiness they may not have experienced stateside. Now new bomber crews are rotating in and out that indeed offers valuable training opportunities but may not give Guam that high state of readiness needed for such an important base.

Background on the B-1B

The first B-1 flew in 1984 when the Reagan administration resurrected the program after it languished in the 1970s, even enduring cancellation in 1977. It was delivered to the Air Force in 1985. The B-1B had a bigger bomb payload than the B-1 – an extra 74,000 pounds. It was a busy beast dropping huge amounts of ordnance over Iraq and Afghanistan after 9/11, including close air support missions, a surprise development for an airplane designed to drop nuclear bombs.

The B-1B can carry a substantial amount of munitions including JDAMs (Joint Direct Attack Munitions), cluster bombs, laser-guided bombs, general purpose bombs, and air-to-surface stand-off missiles. The bomber was nuclear-capable until 2007 when strategic arms treaties such as START and New START eliminated nuclear weapons from the B-1B inventory.

Seventeen B-1B bombers were retired from the fleet in 2021 to make way for the new B-21 stealth bomber. Deployments to Guam are important for the B-1B to ensure it maintains relevance as the U.S. military looks to China and North Korea for new missions to ensure these states do not start a conflict.

Proponents of the B-1B will have to emphasize its multi-role capability of close air support and intercontinental conventional bombing. A better mission may be its ability to fire stand-off missiles outside the range of enemy air defenses. This capability has become more pronounced as Russia has used its bombers to fire stand-off missiles from Russian air space into Ukraine rather than going up against Ukrainian surface-to-air missiles. But as for Guam, B-1B pilots will continue to answer the call in East Asia to fly with allies. These rehearsals should reassure the Air Force and policy makers that the B-1B is still relevant if any conflict arises.