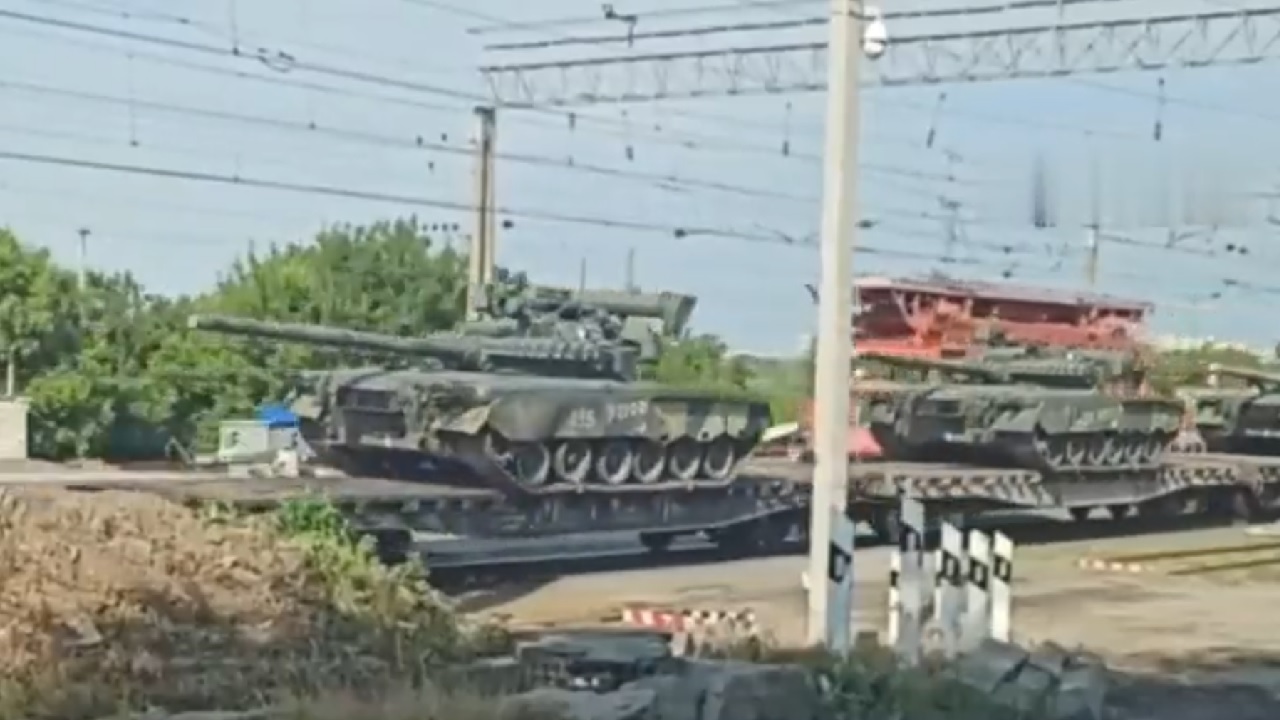 Russian tanks headed off to the battlefields of Ukraine. Image Credit: Creative Commons.

A former U.S. Army officer breaks down the latest video coming out of Ukraine: Despite all the tanks and armored personnel carriers lost during the war in Ukraine, more Russian armor reinforcements are on the move. Video on social media of a train transporting T-80BV and T-62M tanks – likely going from the Motherland to Ukraine – shows that Russia is far from giving up on this costly war of attrition. Shown below, forty seconds of footage shows nine T-80s and 20 T-62s, according to one Twitter user.

Can These Trains Keep Up?

At the beginning of the war, Kremlin war planners assumed that Russian trains would have no problem re-supplying troops and getting material to the front. Russia greatly depends on its railways. The country’s military actually has a force of troops that maintain and operate its rail system – called the “Railway Troops,” (Zheleznodorozhniye Voiska).

Rail Forces Have Been Busy

As Foreign Policy describes this large unit, “Their 10 brigades are attached to military districts and work to repair damaged lines, build or reconstruct bridges, and assist the armed forces in concealment. They can also supply fuel, clothing, and weapons to the front as well as restore road and rail access if they are bombed in combat.”

Rail-based Logistics Have Not Gone According to Plan

Russia also thought it could commandeer Ukrainian rail heads inside the country’s borders to better supply the marauding troops that were assuredly going to spread like wildfire across Ukraine. This scenario would have had permanent Russian troops in the north near Kyiv and the east near Kharkiv, in the Donbas region, and the south near the coast of the Black Sea.

Trucks would then take over where rail could not or did not operate. But the Ukrainians have dashed Russian logistical hopes. Trucks in serpentine convoys were easy pickings for Ukrainian artillery and drones. Supplies such as water, food, fuel, and ammunition never made it to the Russian troops, placing strain on the railways to keep more supplies headed to the front for trucks that were already destroyed. Some analysts have observed that Russia did not have enough trucks to go around before the war started.

And what about tanks on the railways? Hundreds have been destroyed by Ukraine, so trains, as you saw in the video, are taking on more significance as Russia gets older models out of storage and sends them to the front.

The T-80BV is a relic from 1985. The T-80BV has a 125mm smoothbore gun. It carries 38 rounds with an autoloader. The tank has a 1,100-horsepower gas turbine engine that puts out an offroad speed of 31 miles per hour and an offroad range of only 155 miles. That is a fuel-guzzling machine, and you can guess that many could simply run out of fuel and be abandoned. But Russia has several thousands of these tanks in storage which explains their transport by rail as Vladimir Putin’s forces pull out all the stops for more armor on the battlefield for an exhausted army.

T-62M also From the Cold War

The T-62M is an upgraded version of the T-62 that was developed in the 1980s. The T-62 is badly outdated, having been first introduced to the Soviets in 1961. The Soviets made about 20,000 and stored thousands. The T-62M has better armor. There is an improved fire control system, and some are equipped with anti-tank rocket launchers. The engines from the original T-62 were replaced but the new power plant only produces 690 horsepower.

Russia is getting desperate. These tanks are obsolete – while the T-80BV is much better than the T-62M – this is still not the optimum armor for such a difficult fight. Neither model is fuel-efficient and both will require initial maintenance to get them ready to go after remaining in storage for so long. They will likely be run by conscripts who will need a crash course on their operation. This will create more strain on the army and its logisticians to keep them supplied with fuel, ammunition, and spare parts. The trains can keep on running but the Russian armor forces need better reinforcements to make a difference in Ukraine.