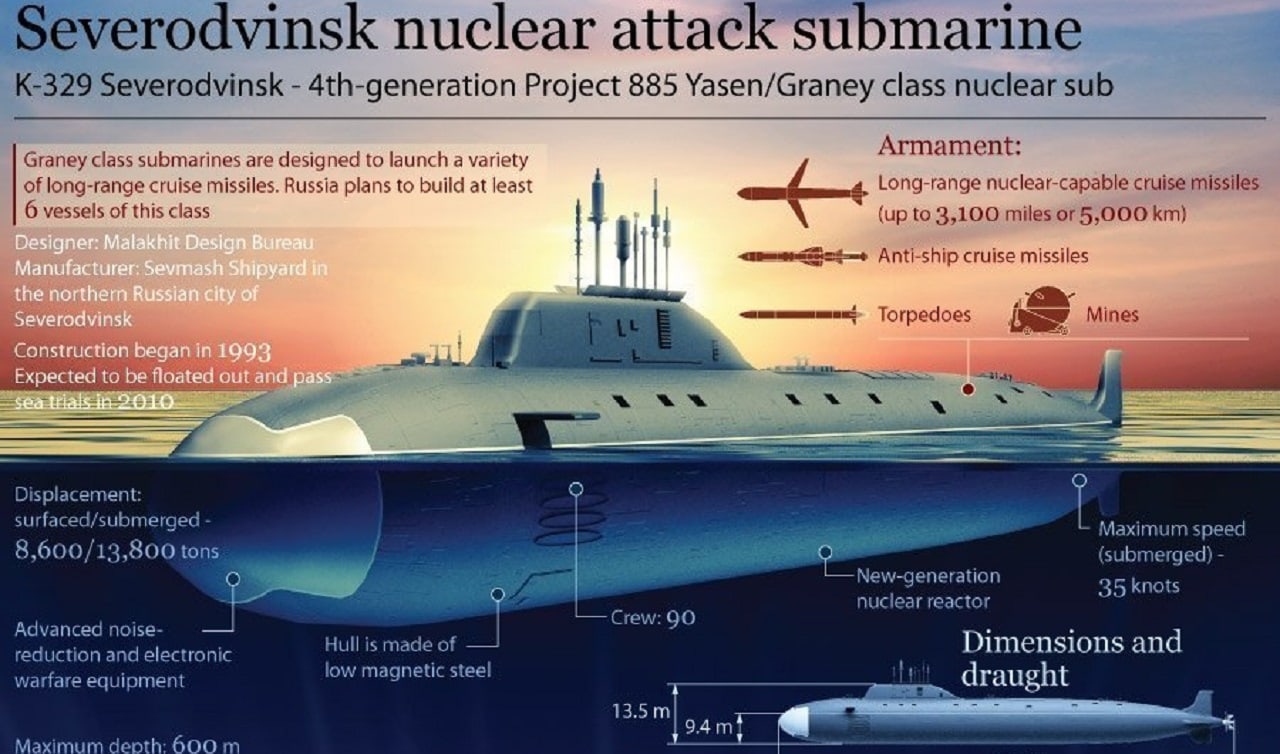 Latest Yasen-M Russian Nuclear-Power Submarine Conducting Trials in the White Sea: In recent months, the world has been focused on events in Ukraine and the Black Sea – but this week, naval observers may have noted that Moscow’s newest nuclear-powered submarine is now conducting its first sea trials. Krasnoyarsk, the second Russian Navy serial submarine of the Project 885M, began the trials on Sunday.

“On June 26, the Krasnoyarsk sub left Sevmash shipyard for the first sea trials in the White Sea. Its onboard equipment and compliance of its seaworthiness and performance characteristics with the designed parameters will be tested at sea,” a source in the Russian naval industry told Tass.

Following those trials, which are expected to be completed quickly, the Krasnoyarsk will next undergo a state test where all of its weapons will be evaluated.

The boat is the third Project 885M – Yasen-M (NATO reporting name “Severodvinsk-class”) – nuclear-powered cruise missile submarine (SSGN) that is currently under construction at the Sevmash Shipyard in Severodvinsk. The second of the class to be serial-built, the Krasnoyarsk was laid down in 2014. The boat was rolled out from the slipway and put afloat on July 30, 2021. It is the most recent Russian Navy vessel named for the third-largest city in Siberia after Novosibirsk and Omsk.

A prior boat, the K-173 Krasnoyarsk, was an Oscar-class submarine that was commissioned into the Soviet Navy on December 31, 1986. After the dissolution of the Soviet Union, she remained in service with the Russian Navy until April 2016.

Developed in the late 1980s, the Yasen-class was initially intended to replace the Soviet Navy’s aging Akula-class nuclear-powered attack submarines. After the collapse and the dissolution of the Soviet Union in the early 1990s, the Project 885M boats were heavily updated with design tweaks and performance upgrades.

The “improved” submarines feature a submerged displacement of 13,800 tons and can reach a maximum speed of up to thirty-five knots. The Yasen-M also features revamped onboard electronics, a slightly reduced overall length, and reportedly a new KTP-6 reactor that is believed to reduce the submarine’s noise levels.

Moreover, there are reports that the boats could soon be armed with the 3M22 Tsirkon (Zircon) hypersonic anti-ship missile.

There are currently seven Project 885M submarines in various stages of construction at the Sevmash Shipyard in northwest Russia, including the Krasnoyarsk, which is now on track to be commissioned into the Pacific Fleet sometime next year. That follows the acceptance of the Project 885M lead nuclear-powered submarine Kazan, which was handed over to the Russian Navy on May 7. The Kazan is now in active service with the Northern Fleet.

What the Experts Say:

A former U.S. Navy senior official in an interview with 19FortyFive had high praise for the Yasen-M subs, noting their stealth technology is “quite sophisticated” and can “rival anything the U.S. Navy has in the water right now.” He explained that “the Yasen-M is really a top-tier submarine. And it without a doubt the best submarine Russia has ever built.”