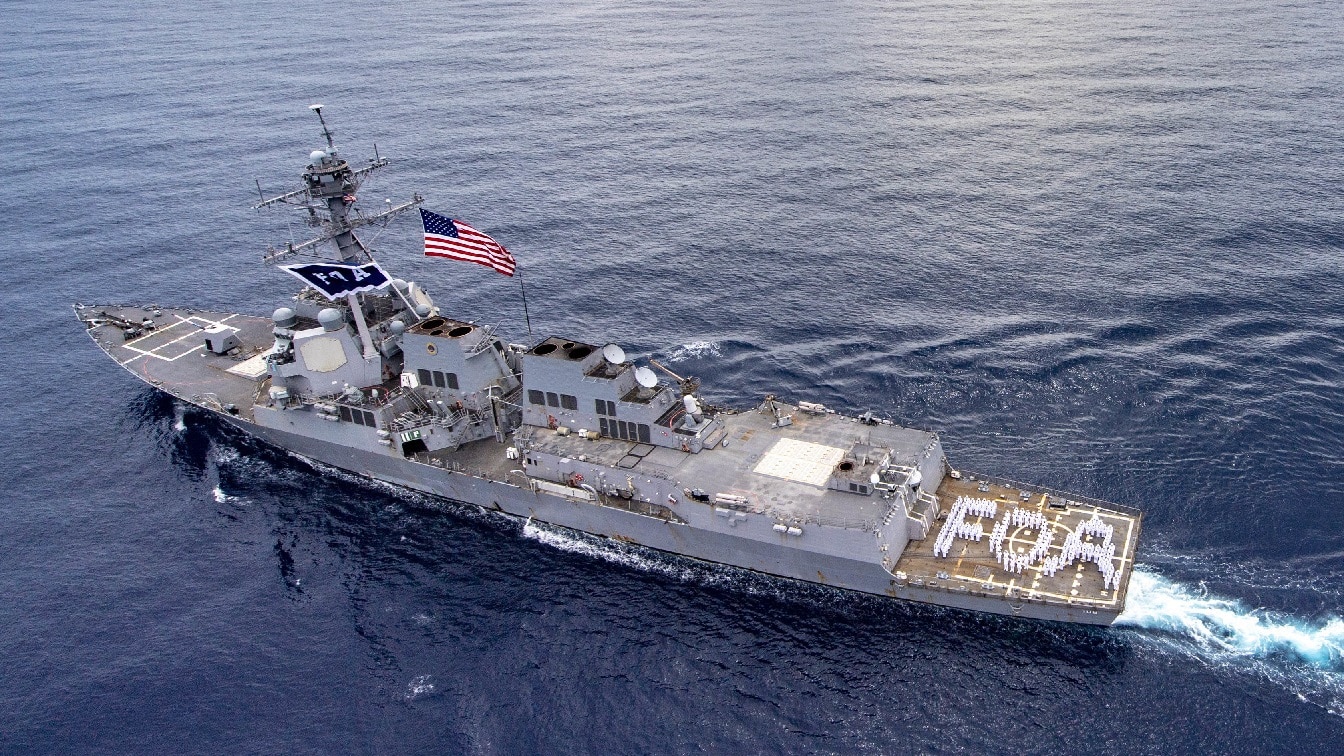 During the Annual Economic Government Roundtable in Greece this week, Israeli Defense Minister Benny Gantz displayed satellite images illustrating Iranian warships operating in the Red Sea. Referring to the presence of the vessels as the Islamic Republic of Iran’s “most significant” military maritime activity in the body of water in nearly a decade, Gantz warned his Greek and Cypriot counterparts of the threat of this escalatory behavior poses.

In recent years, Israel and Iran have been accused of partaking in a “shadow war” in the Persian Gulf, exchanging attacks on each other’s vessels in perpetual retaliation. Iran has also been accused of targeting international oil tankers and provoking U.S. Naval ships in the Persian waters. Iranian officials have justified its naval presence in the Red Sea as a necessary move to protect its own oil tankers.

In satellite images displayed by Gantz in Athens, four Iranian vessels are depicted patrolling the seas. The “Hengam” landing ship, “Mowsk” frigate ship and two “Bandar Abbas” auxiliary ships were displayed by The Times of Israel. Gantz expressed concern to the roundtable, noting that “Iran is expanding its activities in the maritime arena. Over the last year, Iran has seized international tankers and attacked vessels. Today, we can confirm that Iran is methodically basing itself in the Red Sea, with warships patrolling the southern region.”

The Defense Minister added that “In the last months, we (Israel) have identified the most significant Iranian military presence in the area, in the past decade. It is a direct threat to international trade, energy supply, and the global economy. It is also a direct threat to peace and stability in the maritime arena, which may affect the Mediterranean and beyond.” According to the Jerusalem Post, Iran is in the process of expanding its Naval arsenal. Gulf states first reported that a new missile boat is under construction at a shipyard on the island of Qeshm. Since the Iranian Navy and the Islamic Revolutionary Guard Corps (IRGC) Navy both possess relatively outdated vessels in their respective smaller arsenals, the construction of a more modern missile-capable ship is worrisome.

Last month, U.S. Navy officials reported that three Iranian attack craft harassed two American ships in the Strait of Hormuz. In a video widely circulated on social media, a small IRGC Boghammar vessel is seen turning head-on toward the USS Sirocco. The USNS Choctaw County was also positioned dangerously close to the oncoming warships during the incident. Although Iran has maintained a presence in these waters for a long time, its Navy started to conduct more aggressive operations in recent years.

In 2019, explosions crippled two oil tankers in the Gulf of Oman. The U.S. accused Iran of carrying out the attack, publicizing evidence of an IRGC patrol boat removing evidence off of one of the tankers directly after the barrage. A few months prior to this incident, four commercial ships owned by Saudi Arabia and the United Arab Emirates were attacked off the port of Fujairah.  Last year, Iran was suspected of perpetuating an attack targeting an Israeli-managed tanker in the Gulf of Oman. The assault killed two crew members, drawing sharp international condemnation. Iran’s history of attacking adversarial vessels in the Persian Gulf ties to the regime’s desire to project power and inflict instability in the global energy market. The Strait of Hormuz is a strategic waterway that sees nearly a third of the world’s petroleum supply pass through it each year. While Iran’s Navy doesn’t possess super sophisticated weaponry, its provocations and harassment of other vessels have the potential to disrupt the world’s oil supplies.

In addition to its increasingly aggressive behavior in the Gulf, Iran has expanded its missile and drone arsenal. Earlier this week, Hezbollah confirmed it launched three drones targeting Israel’s Karish gas field over the Mediterranean. The Iranian-backed organization based in Lebanon serves as the country’s self-named “Islamic Resistance Force.” Functioning as Tehran’s most vital proxy in the region, Hezbollah frequently incites tension between Lebanon and Israel. Israel’s Defense Forces (IDF) intercepted the drones, indicating there was no threat or danger to the country’s assets. The Iranian-backed provocation in the Levant coincided with a worrisome development in Tehran. Iran carried out a second test of its Zuljanah satellite launcher in late June, displaying its advancing space capabilities. Defense Minister Gantz referred to this test in his remarks at the roundtable in Greece, cautioning that “This test demonstrates that the Iranian regime has the capabilities to develop intercontinental ballistic missiles that may reach as far as the center of Europe.”

While Iran claims its ballistic missile program is solely defensive, industry and military experts find this hard to believe. If Iran does modernize its Naval arsenal to include vessels that can successfully launch long-range missiles, its worldwide adversaries will be threatened. The positioning of the four vessels in the Red Sea follows reports that the U.S.-Iran joint nuclear negotiations in Vienna will restart imminently.