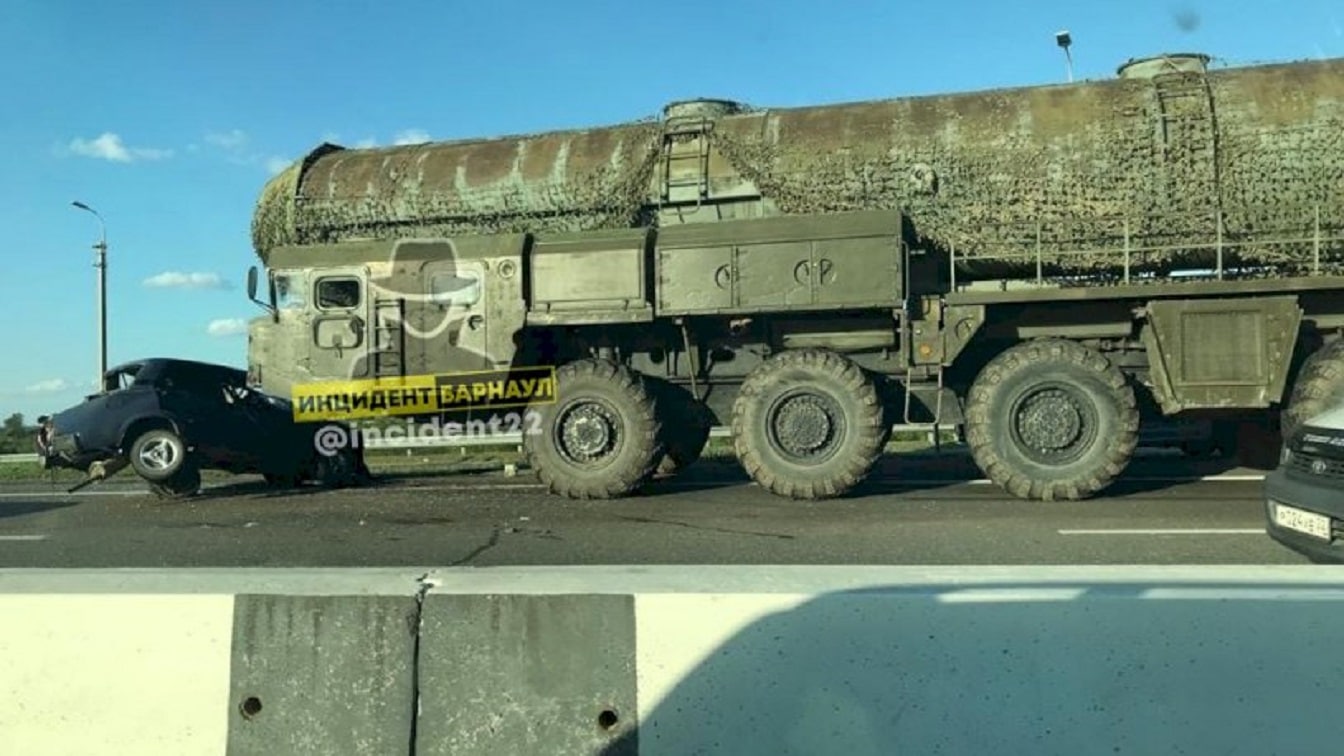 Russian ICBM Transporter Causes Crash but is not the First Collision of Military and Civilian Traffic – Even in times of war, traffic accidents on the home front still occur. As reported by The Drive, а photo of what appears to be a traffic accident in Russia involving a civilian car and a Russian missile transporter has begun circulating widely on social media.

The scene of the collision between an ICBM training vehicle and a car in Russia, August 4, 2022. pic.twitter.com/yM5BsTfw0o

What Happened in the Crash?

The Drive’ article on the crash photo identified the military vehicle involved as a MAZ-7917 transporter-erector-launcher equipped to carry a Topol intercontinental ballistic missile (ICBM).

According to The Drive, the military vehicle involved in the accident was a training version of the MAZ-7917, whose missile would be replaced with a tank containing water or sand to simulate the characteristics of the vehicle if it were loaded with a full-size missile.

This crash is not the first crash involving Russian military vehicles. Such accidents occur semi-regularly as Russian military units move throughout Russia on routine and non-routine movements. The image in question of the collision aftermath included the watermark of the local Russian outlet Barnaul22, which covers local news in the city of Barnaul, a city located in Russia’s Altai Krai near the Kazakhstani, Chinese, and Mongolian borders.

While Barnaul22 did not have any articles on its website about the crash at the time of writing, however, different local news outlets provided more details on the accident.

According to the local branch of Russia’s Interior Ministry, the collision occurred at 7:05 pm on the Chuiskiy Tract to the southeast of Barnaul in the Krai’s Pervomaiskiy District. The accident was in fact a three-way collision between a Porsche Cayenne, a VAZ Lada 2107, and the massive MAZ-7917, and resulted in three injuries. It is unclear how seriously injured the three were, or what happened to the driver of the Topol transporter-erector-launcher following the collision.

Local authorities stated that the Cayenne had caused the collision by “pushing” the Lada into the transport vehicle. On August 4, local media reported that a nearby section of the Chuiskiy Tract would be closed for military exercises for part of the evening of August 4. It was not immediately clear if the military vehicle involved in the August 4 crash was participating in such exercises, but its proximity to the closed stretch of the road could imply that it was participating in the maneuver.

What is the Topol?

The RS-12M Topol intercontinental missile designed to be carried by the MAZ-7917 involved in the accident in question was one of the first Russian ICBMs to be developed after the fall of the Soviet Union and entered service in 1997.

The system has been a platform for subsequent modification, with newer variants known as the RS-12M1 and RS-12M2 (which are both referred to as the Topol-M). With the capability to be silo or mobile-vehicle based, the Topol-M is reportedly capable of striking targets within a range of 11,000 kilometers and is designed to carry a single warhead.

According to the Bulletin of the Atomic Scientist’s 2022 Nuclear Notebook estimate, Russia possesses a combined 87 Topol-series missiles. Interestingly, the estimate notes that last nine non-modernized nuclear-armed Topols are stationed near Barnaul, possibly meaning that the MAZ-7917 transporter-erector-launcher involved in the August 5 crash could be assigned to that unit.