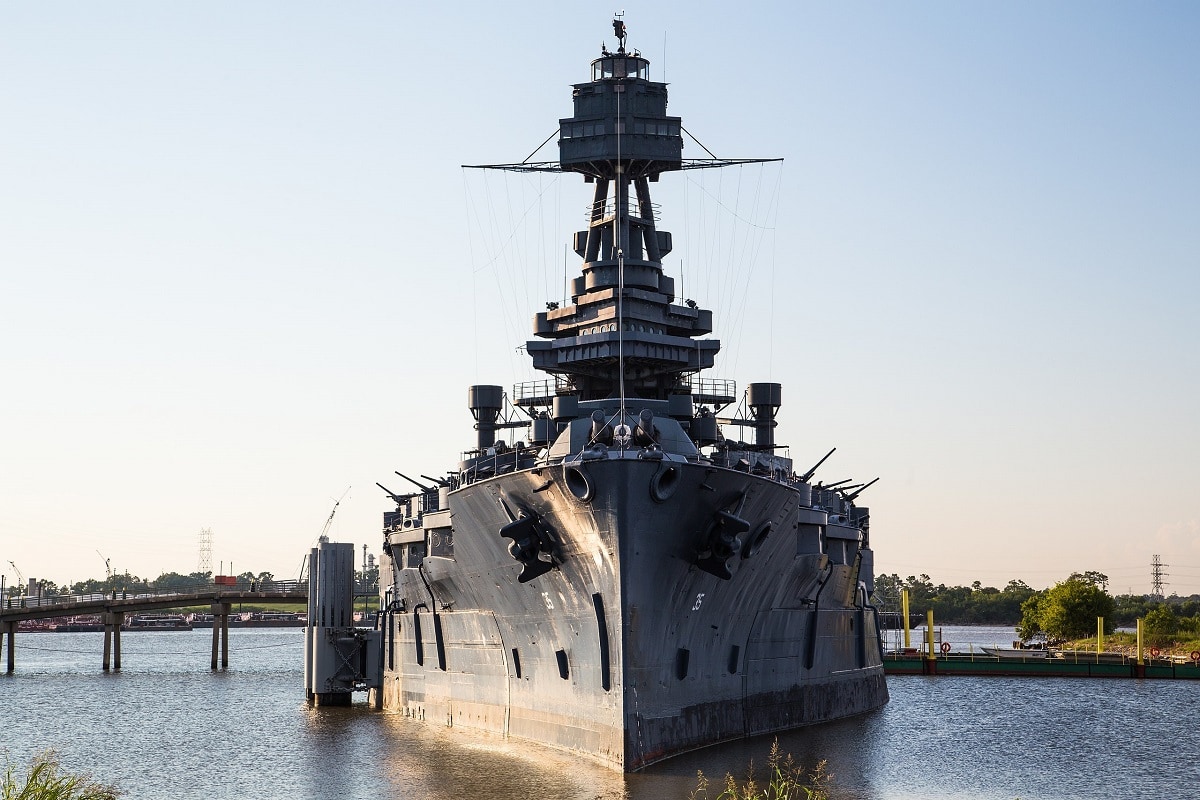 Battleship USS Texas On the Move – The only preserved battleship to see service in both World Wars has been fighting a largely losing battle against the elements, and this week, USS Texas (BB-35) will be moved for the first time since 1948 – to undergo long-needed repairs and restoration.

USS Texas: a History and Analysis

Launched in 1912, she provided escort and blockade duties in the Atlantic Ocean during the First World War, and in April 1917, while protecting the merchant vessel Mongolia, fired on a surfaced German U-Boat – the first American shots of the conflict – and later supported the Normandy landings during the Second World War.

She was also the first battleship to be turned into a museum after her decommissioning in 1948. Since April of that year, she’s been moored in the Houston Ship Channel near the San Jacinto Monument – near the location where Texian troops led by Gen. Sam Houston surprised and quickly defeated the Mexican Army in 1836.

Today Battleship Texas as she is now known, as the official – but entirely ceremonial – flagship of the Texas Navy.

However, all those decades spent in the water have taken their toll on the old battle wagon, and in June 2017, a six-by-eight-inch hole about fifteen feet below the waterline opened and caused the ship to list six degrees. The situation was so dire that there were concerns the ship could sink.

Fortunately, work has been taken to ensure that the warship won’t be lost to the elements.

USS Texas: What Happens Next?

On Wednesday, August 31, the now legendary battleship will be moved from her long-time home in La Porte to Galveston’s Pier 21. Efforts have been underway since May when crews began to remove about 23,000 cubic yards of mud from the stern around the ship to clear a path for towing.

After the restorations are completed, it isn’t clear where the ship will be preserved for future generations. However, it won’t be the San Jacinto Battleground Historic Site.

Instead, Galveston has been suggested as the most likely destination, while Corpus Christi has also been suggested. Some veterans have also championed Galveston as it was the original home of the Texas Navy, dating back to when Texas was a republic, while Seawolf Park is located on Galveston’s Pelican Island. The park currently houses the World War II submarine USS Cavalla and one of only three destroyer escorts in the world, the USS Stewart. USS Texas would certainly be in good company.

“The scope of this is really big. But when we’re done, and we reopen her to the public we want her to be seen in a condition she hasn’t been seen in in years,” Battleship Texas Foundation Chief Operating Officer Bruce Bramlett told reporters. 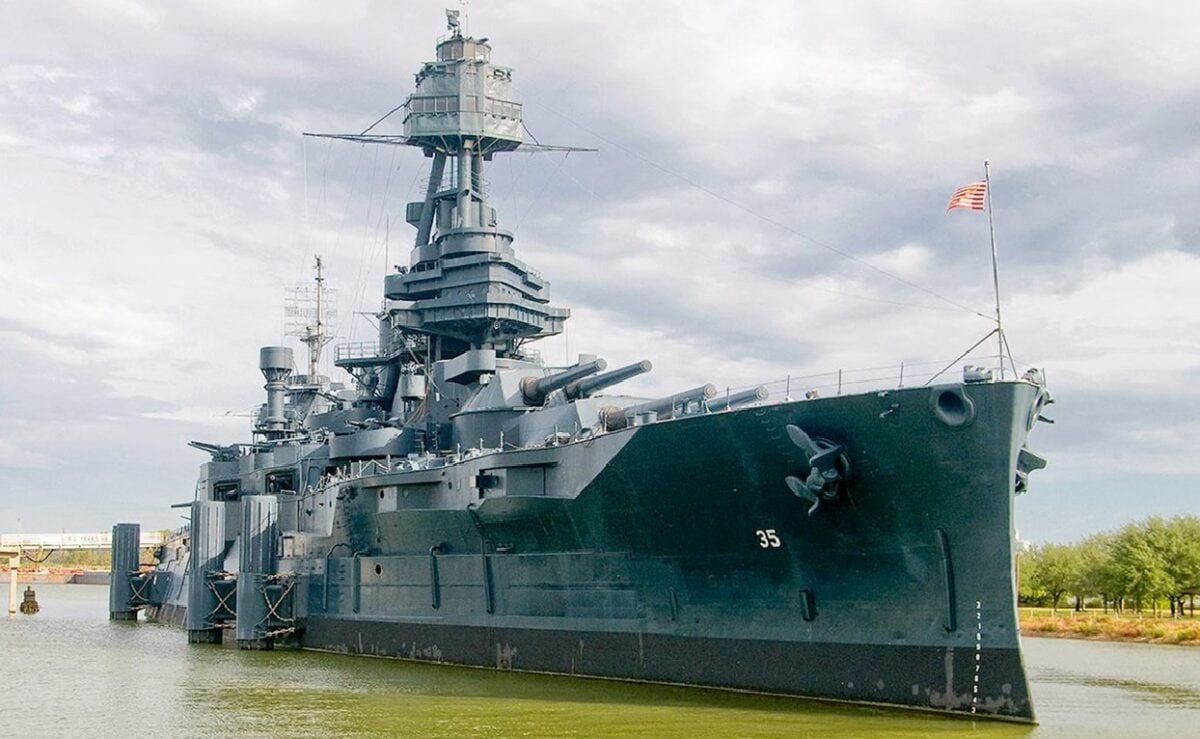 BB-35 is also notable for being the only battleship still in existence today to have taken part in combat operations in both World Wars.

After entering service, the New York-class warship was first deployed during the “Tampico Incident,” which involved the United States’ occupation of Vera Cruz, and she began fleet operations after America’s entry into the First World War.

USS Texas is also noteworthy for the technological improvements and advancements that were made during the course of service with the U.S. Navy. 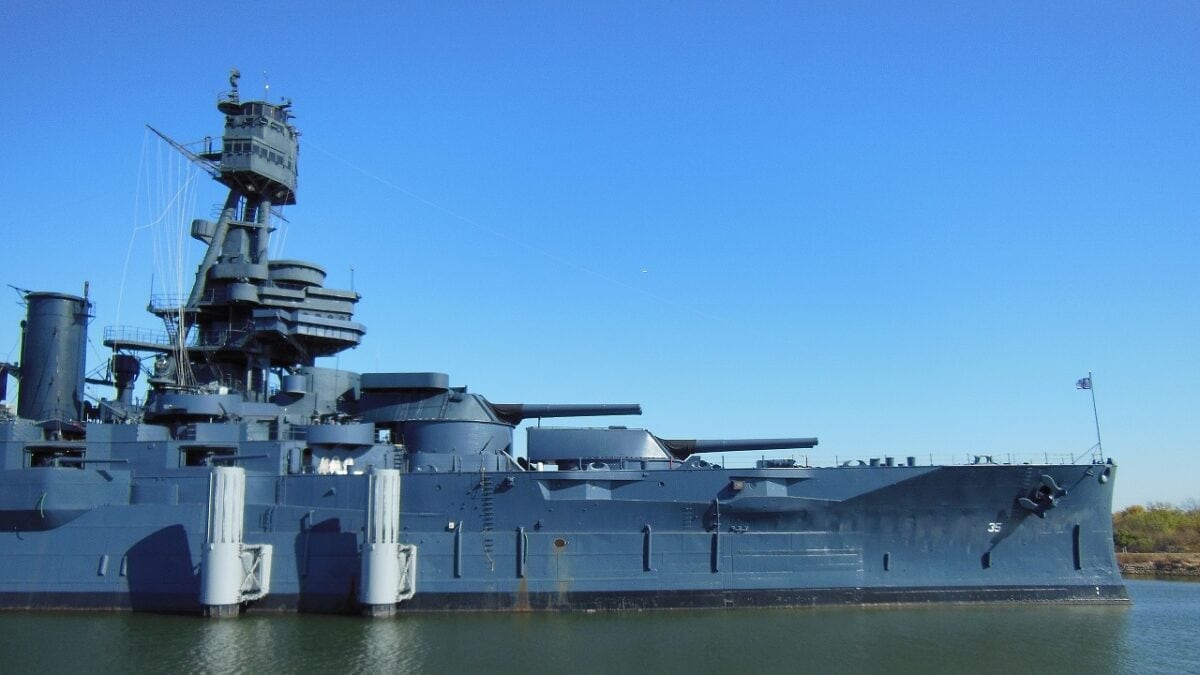 When she and her sister warships were constructed, U.S. turbine manufacturers were unwilling to meet the strict specifications laid down by the Navy Department’s Bureau of Ships. Since no compromise could be made on standards and prices, the Bureau had to revert to the older reciprocating engines for the New York-class battleships. The use of the machinery actually may have given up to 30 percent improvement in economy at cruising speed, and in no way was inferior at full speed.

In addition, USS Texas proved to be the perfect testbed for the Navy, and in March 1919, she became the first U.S. battleship to fly off an aircraft – a British Sopwith Camel – from a temporary platform that had been fitted atop her second turret. The warship subsequently underwent a major reconstruction from 1925 to 1927, and the ship was reboilered with six Bureau-Express oil-fired units. 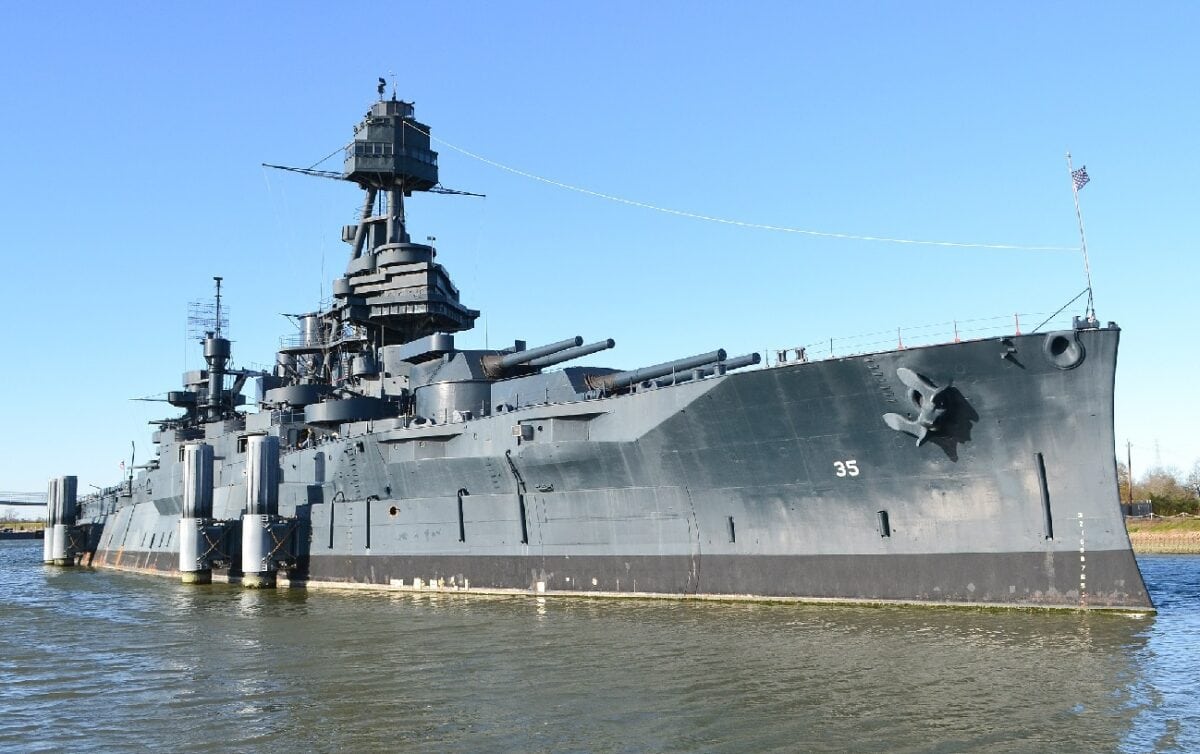 Other improvements were made to the battleship’s combat systems, and BB-35 became the first U.S. battleship to mount anti-aircraft guns, as well as the first U.S. vessel to control gunfire with directors and range-keepers. Following the modernization, USS Texas alternated operations between the Atlantic and Pacific Oceans until 1931, when her base was shifted to California. She served as the fleet and division flagship during U.S. Fleet exercises and, in 1937, was reassigned again to the Atlantic.

The warship took part in her first combat operations of the Second World War as part of Task Group 34.8 (TG 34.8) in support of Operation Torch, the Allied invasion of North Africa. Texas transmitted Lt. General Dwight D. Eisenhower’s first “Voice of Freedom” broadcast, which called up the Vichy French forces defending Morocco not to oppose the Allied landings. In addition, as a young news reporter, Walter Cronkite was among those onboard the battleship during the operations and was even granted permission to fly off of the ship in one of her OS2U Kingfisher aircraft.

The aging battleship returned to Atlantic convoy escort duties and was among the warships to provide supporting fire during the Normandy landings. The battle wagon also participated in the bombardment of Cherbourg, during which she was hit by enemy coastal artillery fire but suffered no serious damage. After undergoing repairs in Plymouth, England, she took part in the allied invasion of the South of France during Operation Dragoon. Following an overhaul in New York City, which involved replacing her main battery barrels, USS Texas returned to the Pacific and later provided naval gunfire support during the Battles of Iwo Jima and Okinawa.

She earned a total of five battle stars for her service in the Second World War.

Her toughest battle has been against time and the elements, but it looks like this is a fight she’ll undoubtedly win. We wouldn’t expect anything less from one of the best battleships ever to sail.