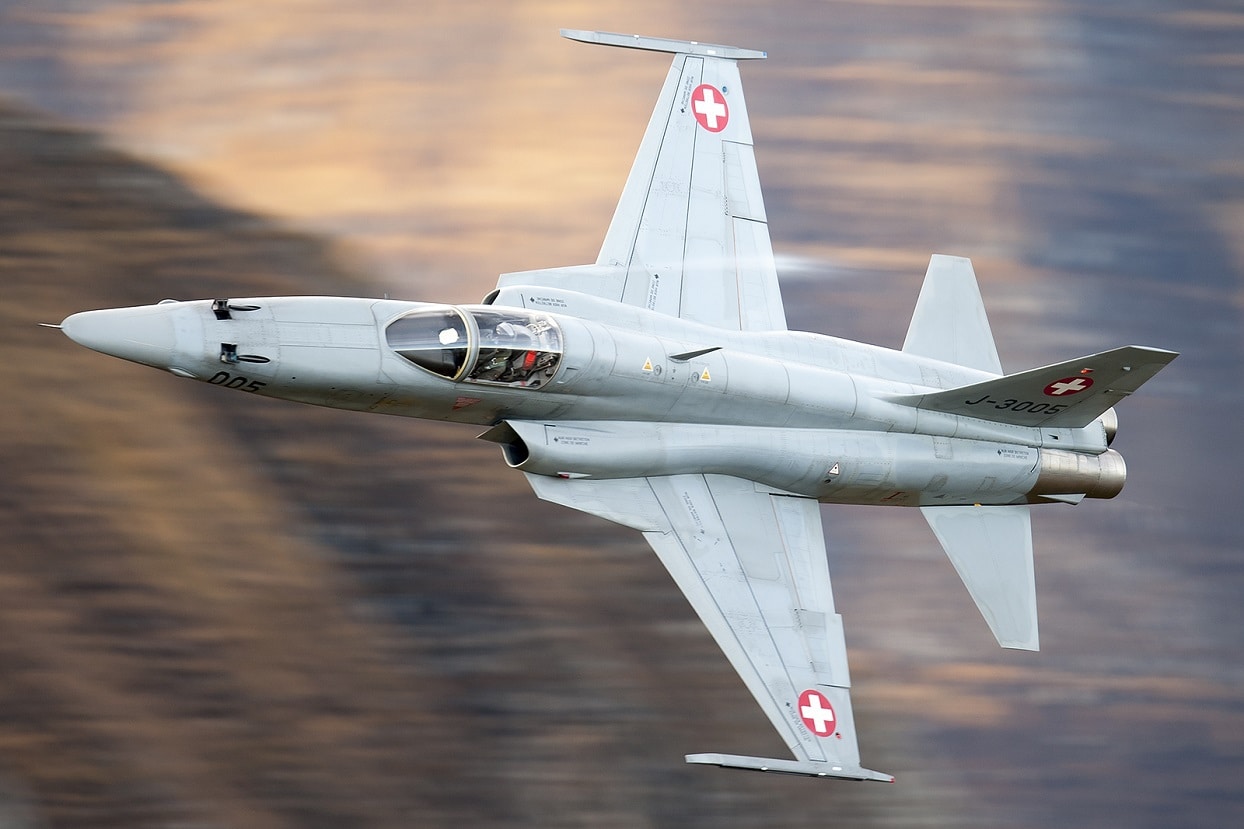 In recent articles, 19FortyFive has discussed the distinctive numerical and technological disadvantages that Taiwan would face in the case of an invasion by mainland China, particularly in the categories of submarines and fighter aircraft.

In the case of the Taiwanese Air Force – officially known as the Republic of China Air Force (ROCAF) – the technological disparity isn’t as severe as it is with their naval brethren, thanks to both imports of the latest variant of America’s F-16 Fighting Falcon, the F-16V “Viper,” and the ROCAF’s own homegrown AIDC F-CK-1 Ching-Kuo (經國號戰機/Jīngguó Hào Zhànjī), dubbed the Indigenous Defense Fighter.

However, Taiwan still relies on a good chunk of her airpower from a fighter plane first produced in 1959 and discontinued in 1987: the F-5 Freedom Fighter, aka Tiger II.

The F-5 series of fighter aircraft was designed and manufactured by the Northrup Corporation, now known as Northrup Grumman. Ironically, even though the first two variants of the F-5, the F-5A and F-5B, were officially dubbed the “Freedom Fighter,” the plane is best known to American film audiences for playing a fictitious and decidedly villainous anti-freedom role: the so-called “MiG-28” of the original Top Gun film back in 1986.

Be that as it may, the ROCAF received its first batch of seven F-5As and two F-5Bs under the U.S. Military Assistance Program in 1965, which was seven years before then-U.S. President Richard Nixon’s rapprochement trip to China and thirteen years before Jimmy Carter granted official diplomatic recognition to the People’s Republic of China whilst concurrently withdrawing such status from the ROC.

However, between the arrival of that first batch of F-5s and Taiwan’s loss of official U.S. recognition, sales and acquisitions of the warbirds continued; in 1973, Taiwan’s Aerospace Industrial Development Corporation (AIDC) began locally producing – under license, of course – its first batch of 100 F-5Es, the first variant to carry the “Peace Tiger” sobriquet. According to Wei-Bin Chang, former Assistant Professor at National Chiao Tung University, on his TaiwanAirPower.org website:

“Later 208 more aircraft were added to the production run in five batches, from ‘Peace Tiger 2’ through ‘Peace Tiger.’ Complexity of the production work by AIDC also evolved in several phases. The whole ‘Peace Tiger’ program was completed on December 9, 1986, when the final aircraft was rolled of the production line. In total, the ROCAF received 242 F-5E and 66 F-5F … Among these batches, Peace Tiger 6 stands out because it is only batch approved after the Carter administration of the US established formal relationships with China in 1979.”

So then, that begs the question: what is the current status of the Taiwanese F-5 program? It’s a mixed bag at best. For what it’s worth, Northrup Grumman is willing and able to do its part to keep the planes flying:

“Since two-thirds of F-5 user countries also operate F-16s, F/A-18s, F-15s or Mirage aircraft, the F-5’s role has shifted from a prime fighter to a lead-in trainer. Many of the international F-5 operators are considering (and some have committed to) basic structural life extension programs and avionics/subsystems upgrade packages to obtain an effective lead-in trainer with a modest investment…Because this new projected role will extend the life of the F-5, Northrop Grumman has focused on a total system support plan approach that will ensure current F-5 users can obtain the necessary structure spare parts and systems upgrades … The U.S. Air Force selected Northrop Grumman in 1995 as the manufacturer for 14 major structural elements and related replacement parts for international RF-5 (reconnaissance) and F-5 aircraft. Based on foreign military sales, the structural upgrade program contract covers all F-5 models and includes a new wing (with optional provisions for Maverick missiles), upper and lower cockpit longerons, horizontal stabilizers, specific fuselage bulkheads, dorsal longerons and engine inlet duct skins.”

Roughly 40 ROCAF F-5E/Fs still remain in service in training roles with about 90–100 F-5E/F airframes held in reserve. These numbers were whittled down slightly further by two fatal crashes that occurred 10 years apart. The first of these tragic incidents occurred on or about September 24, 2011, and involved one RF-5 surveillance plane and a two-seater F-5F trainer that disappeared from radar 13 minutes after takeoff from an air base in the eastern city of Hualien; the remains of three pilots were eventually recovered from the mountainous crash site. The second of these tragedies transpired on or about March 22, 2021, whereupon two F-5Es collided in mid-air after taking off as part of a four-ship training mission from Taitung’s Zhi-Hang Air Base; two fatalities resulted.

Both of these incidents resulted in the temporary grounding of Taiwan’s entire F-5 fleet, and they underscore both the urgency of continuing to upgrade the jet fighter arsenal sooner rather than later.