Last December, USS Gerald R. Ford (CVN-78), the largest and most expensive warship ever built, quietly reached its initial operating capability, before beginning her six-month repair availability period that began in March following explosive shock trials. Finally, this week – five years after she was commissioned – the $13.3 billion vessel, and lead vessel of a new class of United States Navy nuclear-powered supercarrier, has been “fully delivered” and is ready to deploy.

Many in the Navy likely thought this day might never come, and for good reason, as the carrier is years overdue and significantly over budget. Delays were due in a large part to working out the “bugs” in a bevy of new technologies on the flattop, including the Electromagnetic Launching System (EMALS), which will be utilized with all future U.S. Navy carriers; as well as the new Advanced Arresting Gear and the Dual Band air search radar.

In addition, the installation of eleven Advanced Weapons Elevators took several years, and the last elevator was only delivered in December.

Yet, as is often said, “good things come to those who wait,” and the Navy has certainly been waiting. Now is the time to focus on what comes next for the carrier.

Even as the ship is now only ready for her maiden deployment, CVN-78 has already spent 250 to 300 days at sea, equal to about two deployments. Since just leaving the repair period, the carrier has been operating at a steady pace off the East Coast of the United States with Carrier Air Wing 8.

During that time, the crew aboard completed system qualification tests, flight deck certification, three phases of air warfare training, and a Combat Systems Operational Readiness Evaluation that included 11,000 aircraft launches and arrested landings, according to the service.

The carrier has been taking part in the completion of training and certifications, ahead of an Atlantic training cruise that will begin later this year.

The upcoming underway won’t be the same as a full carrier strike group deployment, USNI also reported. Instead, it will be an extended training cruise that is meant to provide the operational commander a chance to get a better sense of how a warship operates. The Navy has billed this underway as a “service retained deployment,” which means it doesn’t require the same certifications for a fully deployed CSG.

The training cruise will partner the strike group with allied ships and will inform a traditional deployment in 2023.

CVN-78 in the Spotlight

USS Gerald R. Ford was developed as part of the Navy’s CVN 21 program, which will consist of a planned total of 10 carriers that will replace the current Nimitz-class carriers on a one-for-one basis. Built by Huntington Ingalls Industries’ Newport News Shipbuilding, the carrier is 1,092 feet in length and has a beam of 134 feet while the flight deck is 256 feet wide. USS Gerald R. Ford displaces approximately 100,000 long tons and is powered by two nuclear reactors with four shafts, enabling the carrier to reach a speed in excess of 30 knots.

Larger in size than the Nimitz-class carriers, Gerald R. Ford can operate with a smaller crew thanks to a greater emphasis on automation, and the warship will also see a reduction in maintenance requirements, as well as a crew workload reduction. This will allow for improved quality of life for the crew including better berthing compartments, larger gyms and workout facilities, and even more ergonomic workspaces.

The carrier’s basic mission will remain largely unchanged, but Gerald R. Ford will be able to deliver greater lethality, survivability, and joint interoperability, along with unmatched versatility and compatibility with continuing joint-force transformation. The flattop will be capable of carrying upwards of 90 of the United States Navy’s most advanced aircraft, and that will include the F-35C Lightning II Joint Strike Fighter, F/A-18E/F Super Hornet, E-2D Advanced Hawkeye, EA-18G Growler electronic attack aircraft and MH-60R/S helicopter as well as unmanned air and combat vehicles. In addition, Ford will also be able to recover and launch various Short Take-Off and Vertical Landing (STOVL) aircraft flown by the United States Marine Corps including the F-35B Lightning II.

The new carrier will have a higher sortie rate of 160 sorties a day with surges to a maximum of 220 sorties a day in times of crisis or during intense air warfare activity. To accommodate the increase, there were design changes to the flight deck, which has a relocated and smaller island. Additionally, there are three rather than four deck-edge elevators, while deck extensions have increased the aircraft parking areas. The aforementioned EMALS has replaced the traditional steam catapults for launching aircraft, while it also provides for more accurate end-speed control, with a smoother acceleration at both high and low speeds. It can be used to launch a range of aircraft from small unmanned drones to heavy strike fighters.

The carrier is also armed with the Phalanx CIWS (close-in-weapons system), which can be used to destroy incoming threats such as small boats, surface torpedoes, anti-ship missiles, and helicopters. It functions as part of an integrated, layered defense system in order to intercept closest-in threats. The Phalanx, which is currently on Navy cruisers, destroyers, aircraft carriers, and amphibious assault ships, among other vessels, consists of one 20mm M-61A1 rotating cannon with six barrels and one search and track radar and FLIR (Forward-looking infrared) camera. The Phalanx Block can fire a 20mm sabot projectile with a tungsten penetrator with an effective firing range of 1,480 m and a maximum firing range of 5,500m. 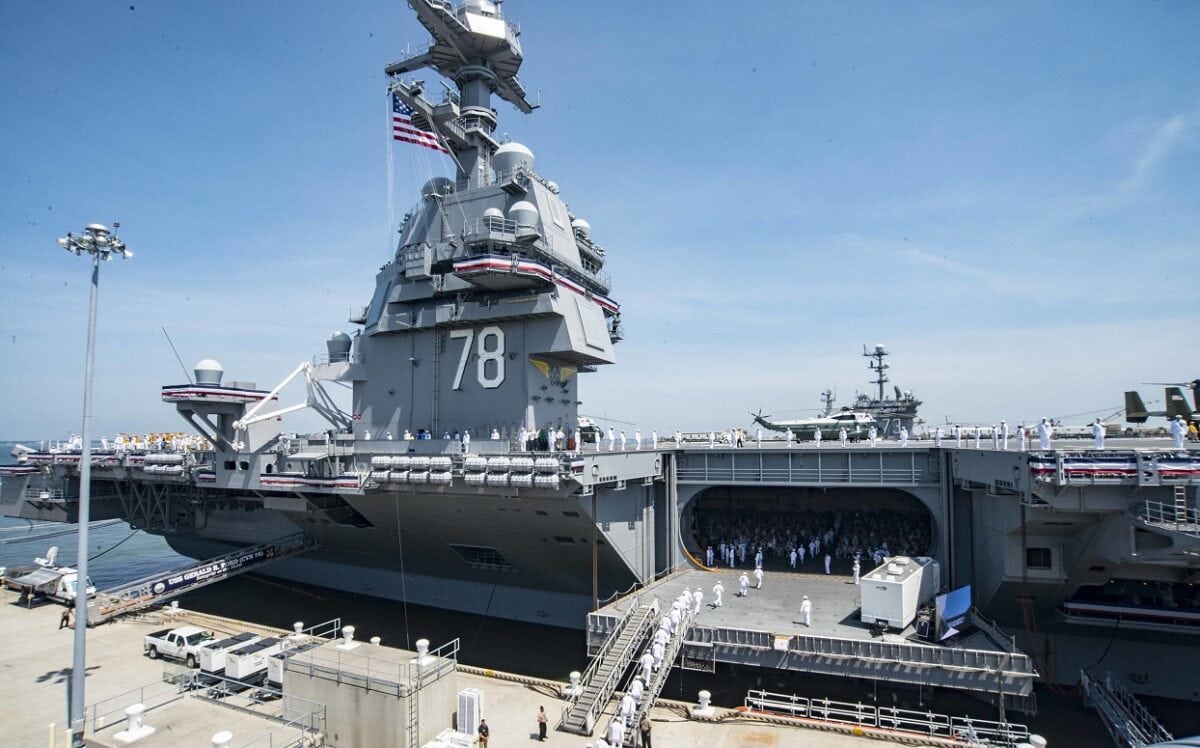 USS Gerald R. Ford was originally scheduled to deploy in 2018. When she finally enters the deployment cycle, CVN-78 will help ease the burden of the existing East Coast carrier fleet, which has seen a string of extended deployments over the last several years. The hope is that the subsequent ships in her class won’t face the same trials and tribulations.