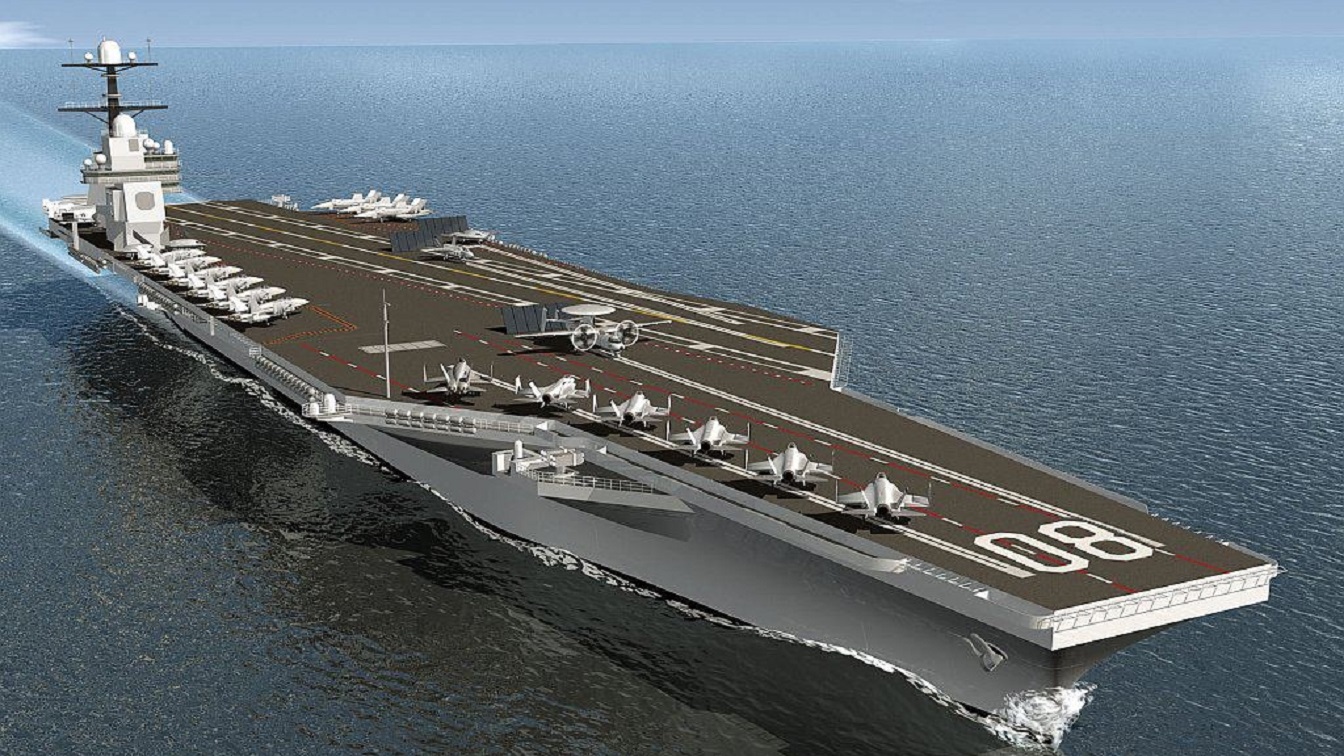 A graphic showing what the future USS ENTERPRISE (CVN 80) is expected to look like when she joins the fleet after 2025. The aircraft are F-35C Lightning II Joint Strike Fighters, F/A-18 E and F Super Hornet strike fighters, E-2D Hawkeye electronic warfare planes, and an unmanned strike jet modeled on the X-47B sitting on the No. 4 catapult. Pennant number orientation on flight deck has been corrected.

It’s steady as she goes for the construction of the new Ford-class nuclear carrier CVN-80 USS Enterprise. Delivery from Huntington Ingalls Industries is not expected until 2028, but the carrier’s keel block has been laid and construction is at least 15 percent complete and is ahead of schedule. Fabrication is going on now at Newport News. The Enterprise is a storied name in the Navy. The CVN-65 Enterprise was the first nuclear-powered carrier, and the CV-6 Enterprise was the sixth U.S. carrier built and served with great distinction in World War Two.

Numerous Carriers in the Shipyard

The nuclear Enterprise was decommissioned in 2017 and the Navy is looking for the most efficient means to scrap it – a slow process because of the difficulty in dismantling the nuclear reactor. This logjam of carriers makes things busy for the Virginia yard as the new Enterprise is being constructed along with the USS John F. Kennedy CVN-79 that is being finalized. Two other carriers are undergoing mid-life refueling and complex overhaul – the USS George Washington CVN-73 and the USS John C. Stennis CVN-74.

Try to Have a Smoother Build Than the Gerald R. Ford

The new Enterprise is part of a 2019 block buy of $24 billion ($12 billion each) with the Ford-class USS Doris Miller CVN-81. Without the purchase of two ships at once, the cost would have gone up to $28 billion if ordered individually. The lead carrier of the Ford-class, the USS Gerald R. Ford CVN-78, has been plagued by delays, but it is nearly ready for deployment later this fall. The Gerald R. Ford is the demonstrator of several different technologies such as the Electromagnetic Aircraft Launch System that made the price balloon to $12.9 billion. The Navy and Huntington Ingalls aim to take the lessons learned from the Ford construction and apply it to the Enterprise build. The Enterprise will be the first ship built entirely by digital model techniques.

Could It Really Last 50 Years In Service?

As the third member of the Ford-class, the Enterprise will have an astounding 50-year service life. The Enterprise is replacing the USS Dwight D. Eisenhower CVN-69. It will have the potential to generate more sorties than the Nimitz-class. The Enterprise may even have the ability to use lasers someday as that technology matures. In the meantime, the new carrier’s two A1B reactors will enable it to steam at 30-plus knots with at least 75 aircraft and over 4,500 sailors and officers on board. The Enterprise will displace 100,000 tons. It will carry the Evolved Sea Sparrow Missile to defend against incoming missiles. The Rolling Airframe Missile will also be an important addition for better air defense. The ship is 1,100 feet long with a 124 foot beam.

The Navy looks to build the Enterprise for almost $900 million less than the Gerald R. Ford. The service branch could use the money saved to buy more F-35C stealth fighters or other types of aircraft.

Learn from Past Construction

Bean counters in the Pentagon and budget hawks in Congress will be watching the Enterprise build closely. No one wants to go through the painful era of the Gerald R. Ford again. The Department of Defense will likely have an outside entity such as the RAND Corporation conduct an after-action review of the Ford’s saga and series of delays in hopes that nothing repeats itself during the construction of the Enterprise. But the development of the Enterprise looks like it is going forward without any issues at this time. Let’s hope Huntington Ingalls and the Navy can bring it in on time and under budget.