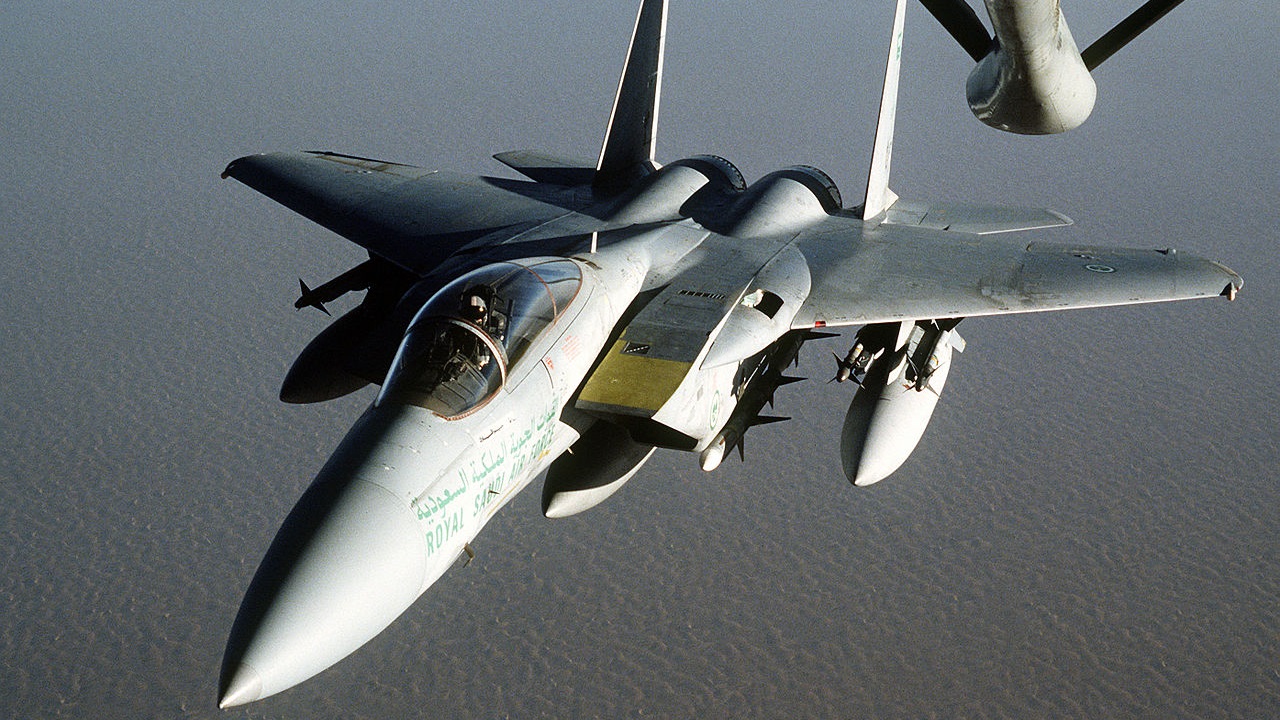 While Riyadh’s Air Force capabilities are noteworthy, it depends heavily on foreign trade to assemble its arsenal. Specifically, the U.S., Britain and France have provided the kingdom access to many platforms. As regional tensions have evolved over the years, Riyadh has shifted its procurement of weapons to focus on better protecting against Iran. Today, the backbone of Saudi’s air force includes airframes and weapons with long-range capabilities, such as the F-15 Eagle and Eurofighter Typhoons.

Origins of the Royal Saudi Airforce

The Royal Saudi Air Force was established in the 1920s with the help of Britain and the remnants of the Hejaz Air Force, which functioned as the air component of the short-lived Kingdom of Hejaz. The tiny air force was comprised of nine airframes and often struggled to overcome staffing and funding issues. By the 1950s, the Saudi king reorganized the remaining pilots to make up the country’s new official air force. At this point, Riyadh began receiving military equipment from the United Kingdom and the United States. The RSAF procured Hawker Hunters in the so-called Magic Carpet arms deal between the UK and Riyadh. In the 1970s, the U.S. agreed to deliver top-of-the-line F-15 fighter jets to the Saudi Air Force. The sale of the Air Enhancement Package — including Airborne Warning and Control Systems — followed closely behind.

The RSAF and the F-15 fighter

Riyadh’s acquisition of the McDonnell Douglas F-15 immediately elevated the RSAF’s aerial abilities. The twin-engine, all-weather tactical fighter first entered service with the U.S. Air Force in the 1970s after it was selected to carry out the service’s mission to operate as an air superiority fighter. It was exported to Japan, Saudi Arabia, and Israel. In 2010, the U.S. signed a $29.4 billion deal to sell 84 F-15 variants to Riyadh with modifications specific to the RSAF. Saudi’s fleet of F-15s proved its worth during Operation Decisive Storm, when Riyadh launched a counter to the Houthi offensive on the Yemeni capital. Since 2015, the F-15 Eagles have played a critical role in Saudi Arabia’s defensive efforts. They frequently shoot down Houthi-launched missiles and rocket barrages.

Last year, the Pentagon confirmed its approval to sell Riyadh 280 AIM-120C-7C-8 Advanced Medium-Range Air-to-Air Missiles (AMRAAM) and 596 LAU-128 Missile Rail Launchers. Eurasian Times explained that, “These missiles would arm Saudi Arabia’s Eurofighter Typhoon, F-15C/D, F-15S and F-I5SA.” According to the outlet, a State Department spokesperson went on to explain that “the missile had successfully been deployed to eliminate hostile drones which posed a risk to both Saudi civilians and American troops deployed there.” The addition of these missiles and launchers would enhance the fighter’s ability to take out strategic naval targets from longer ranges.

The RSAF and Eurofighter Typhoons

Initially conceptualized in the 1980s, the Eurofighter featured the necessary components to counter the USSR’s near-peer fighters. The resulting jet, however, was not introduced until the early 2000s. BAE Systems, Airbus, and Leonardo all participated in the fighter’s design, making the Typhoon a truly collaborative European effort. The Typhoon is perhaps best recognized for its high agility at any speed. As Harrison Kass summarized, “The agility was owed mainly to a relaxed stability design. To compensate for the jet’s inherent instability, a quadruplex fly-by-wire control system was installed – as a pilot’s manual operation would not have been able to keep the jet stable. The fly-by-wire system prevents the pilot from pushing beyond the permitted maneuvering envelope.”

Since the platform is compatible with a variety of armaments and equipment, the Typhoon is better equipped to carry out air-to-surface strike missions. For this reason, the jet has become a mainstay of the majority of the navies that have acquired it. In 2005, the RSAF procured 72 Typhoons in its first investment in the airframe. In 2018, the Saudi Crown Prince signed a memorandum of intent with the British government for 48 additional fighters. The Typhoon’s advanced features play an important role in Riyad’s aerial strategy.

Today, Saudi Arabia’s fleet accounts for one-fifth of all military aircraft in the Middle East. Equipped with a large fleet of powerful foreign fighters like the F-15 and Eurofighter Typhoon, the RSAF stands as a formidable entity in the region.