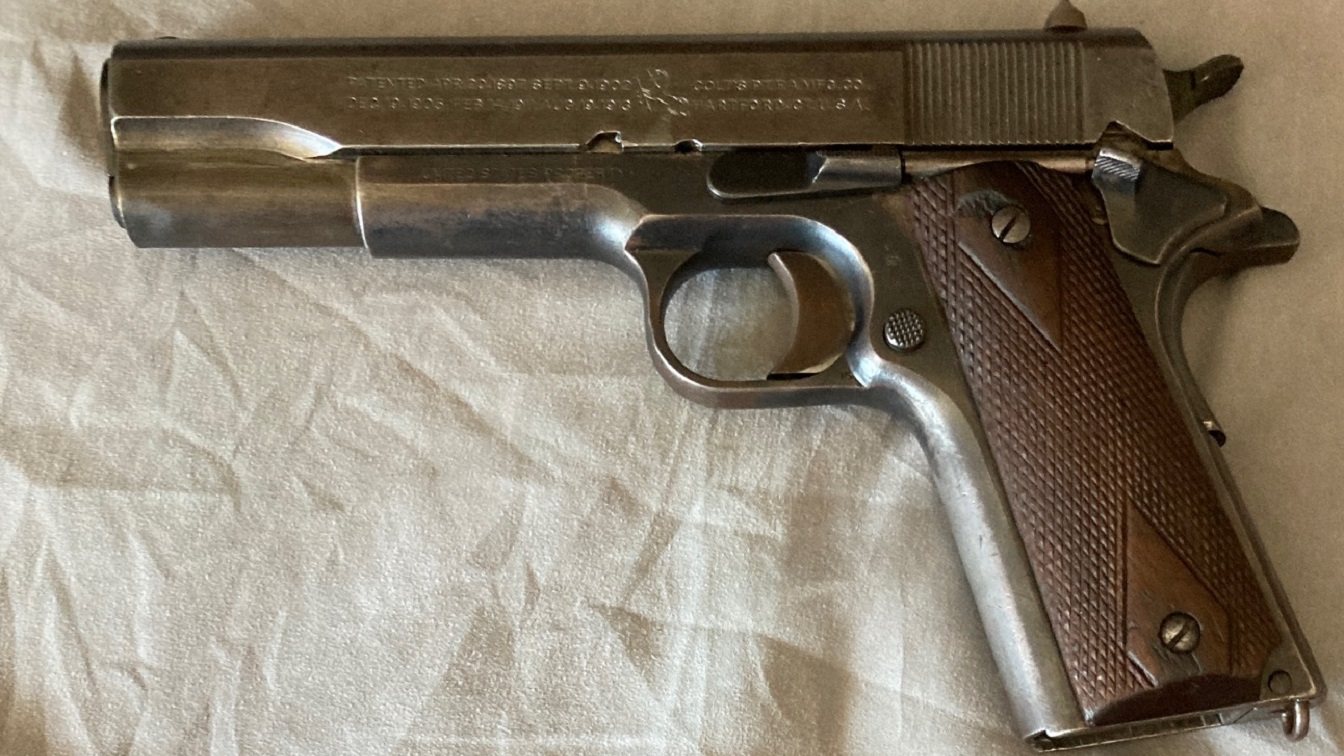 M1911 Showdown: When opportunity knocks, you answer the (proverbial) door. Originally, Yours Truly was simply planning to take off the entirety of the Labor Day weekend, my genuine and heartfelt love for my 19FortyFive job notwithstanding. But when planning my SoCal vacay, one of my old buddies – who’s both a fellow USC alum and a fellow Federal law enforcement veteran – agreed that a range outing was in order and that he was going to bring his WWII GI-style – though not actual WWII vintage – Rock Island Armory (RIA) M1911-A1 .45 ACP whilst I was gonna bring my beloved genuine WWI-era Colt M1911 (sans “-A1”) in the same caliber, it was too good a write-up opportunity to pass up. So, without further ado… 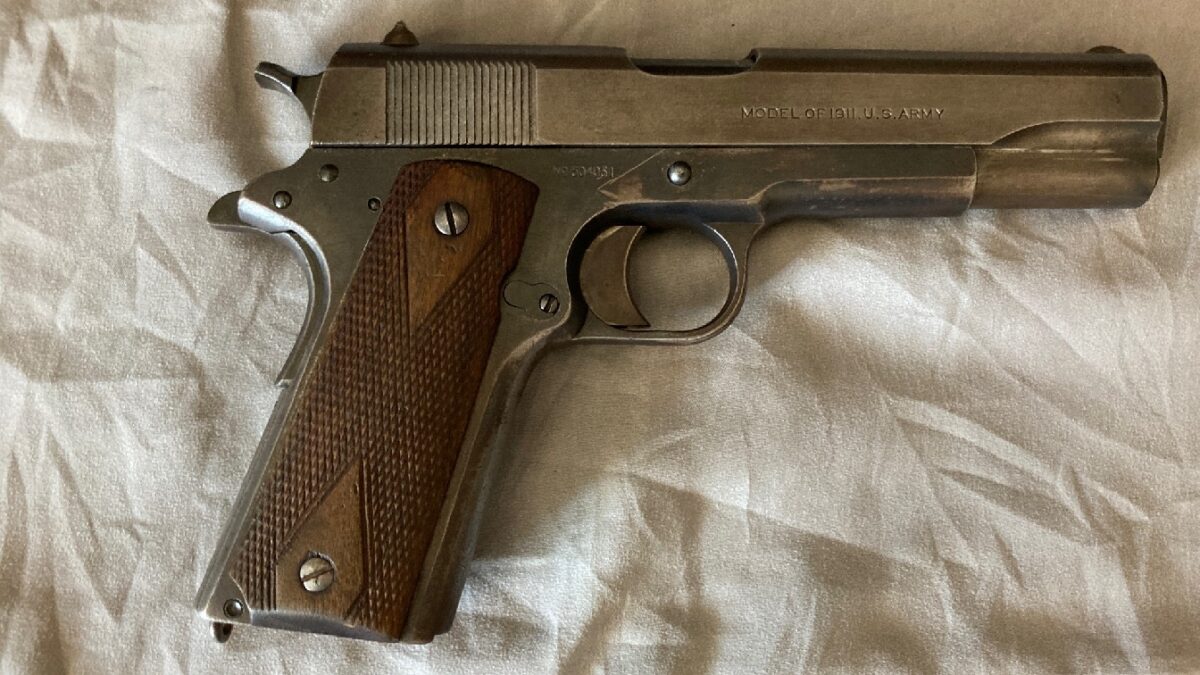 As the alphanumeric designation indicates, the M1911 was officially adopted as the U.S. Army’s first-ever semiautomatic pistol in the year 1911, thus becoming the most powerful-ever handgun cartridge adopted for general military personnel issue. In order to gain acceptance by the stodgily revolver-oriented Army bureaucrats, the gun had to pass a 6,000-round torture test, doing so with aplomb. Seven years later, American “doughboys” were off to fight in the First World War, whereupon the .45 auto established her reputation for ruggedness and stopping power in the muddy trenches of Europe.

But soldiers being soldiers, they had some kvetches about the pistol, which led to the M1911-A1 modifications in 1926: a thicker front sight, arched mainspring housing, longer hammer spur, shorter trigger (to benefit smaller-handed shooters), relief cuts in the frame behind the trigger guard (also for smaller-handed shooters’ sake), longer grip safety spur (this one to protect larger-handed shooters from hammer bite), and full-checkered plastic grips instead of the fancy diamond-checkered wood grips (presumably intended to save money rather than trees).

Generally, when people talk about “the 1911” nowadays, whether to praise it, criticize it, or both concurrently, chances are they’re actually talking about the 1911-A1, as that’s been the predominant version since WWII.

The RIA M1911-A1 pistols are made by the Arms Corporation of the Philippines (Armscor), located in the city of Marikina in the Metro Manila area. The company dates back to 1905, but I don’t recall seeing their .45s hit the U.S. market until the first decade of the 2000s; if any of our readers recall seeing them being imported Stateside earlier than that, please let us know in the Comments. The exchange rate of the Philippine Piso to the U.S. dollar enables the RIAs to substantially undersell domestically manufactured 1911-A1s; to quote Eric Hung of Pew Pew Tactical, “Rock Island Armory (RIA) manufacturers their 1911s in the Philippines and passes on the savings to us. When I ask people about RIA … words like ‘affordable’ and ‘best-bang-for-the-buck’ always come up.” 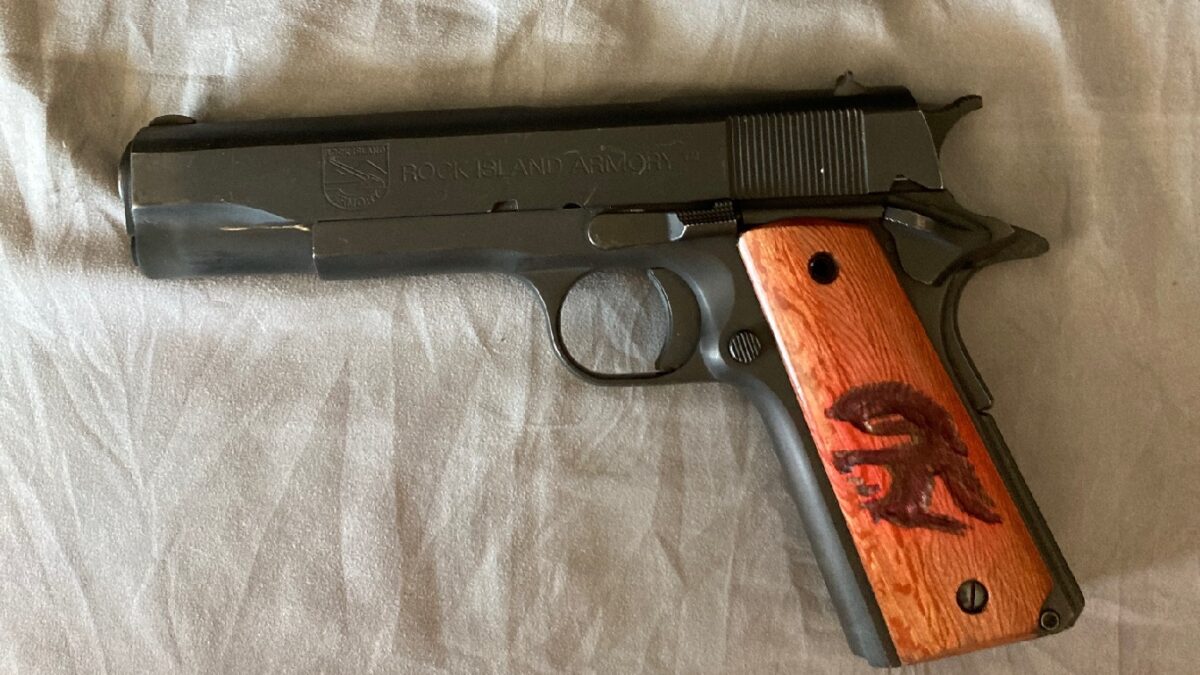 My Pinoy USC Fed comrade bought his RIA pistol in circa 2010 for $435.00; he guesstimates that he’s put 1,000 rounds through her since then. She has the Parkerized finish standard on GI .45s from WWII onward, as well as all of the other typical -A1 features except one: for whatever reason the manufacturer went with the WWI-style flat mainspring housing instead of the arched ones, which is neither good nor bad, but “just the facts, ma’am” (as Sgt. Joe Friday would say). My friend also added customized USC Tommy Trojan-head grips.

Brief History of my Colt M1911

I got my dear old Colt as a 2017 Christmas present to myself when I was on R&R from a private military contractor gig in Iraq. I saw this old beauty on display at the Winchester Gallery Gun Store in Fort Worth, Texas for $2,199.00. (How many previous owners or rounds fired through it, I hadn’t a clue). I texted a buddy of mine to ask his advice, and he threatened to sell me to a Gypsy woman if I didn’t buy the gun … so I bought it!

Roughly 1,000 rounds later, I’m glad I did. The gun’s papers, courtesy of Colt’s Customer Service department, show that she was built on 5 November 1918 – a mere six days before WWI ended! A true piece of history!

So, my compadre and I were off to good ol’ Los Angeles Gun Club to fire the old and new .45s side-by-side. Bottom Line Up Front (BLUF): the old Colt was the clear winner, in terms of accuracy and reliability, in spite of the tiny front sight and the age.

My friend and I fired 100 rounds apiece through each gun, using PMC Bronze 230-grain full metal jacket (FMJ) “hardball.” The RIA had six failures to fully go into battery, whilst the Colt had zero hiccups. Both of us noticed a “ka-chunking” (for lack of a more technical description) with the RIA that was absent from the older gun. My friend pointed out a “difference in the quality of the gauge of the steel; it’s thicker on the Colt, which explains the better recoil control and greater accuracy.”

It also helped that the Colt had the crisper trigger, compared to the RIA -A1’s, which was adequate but kinda gritty.

Both were more than sufficiently accurate. The RIA easily nailed all 25 of her head shots at 21 feet, nicely centered around the bridge of the nose of the ICE-QT target; at 50 feet, all 25 rounds were in the 5-zone of the torso, though 9 rounds were low and away from the 5x tiebreaker ring. But ol’ girl Colt took things another level, 25 rounds in a one-hole, fist-sized group at 21 feet, and at the 50’ line, 21 out of 25 rounds were beautifully clustered in the 5x-ring.

As the saying goes, “They don’t make ‘em like they used to!”