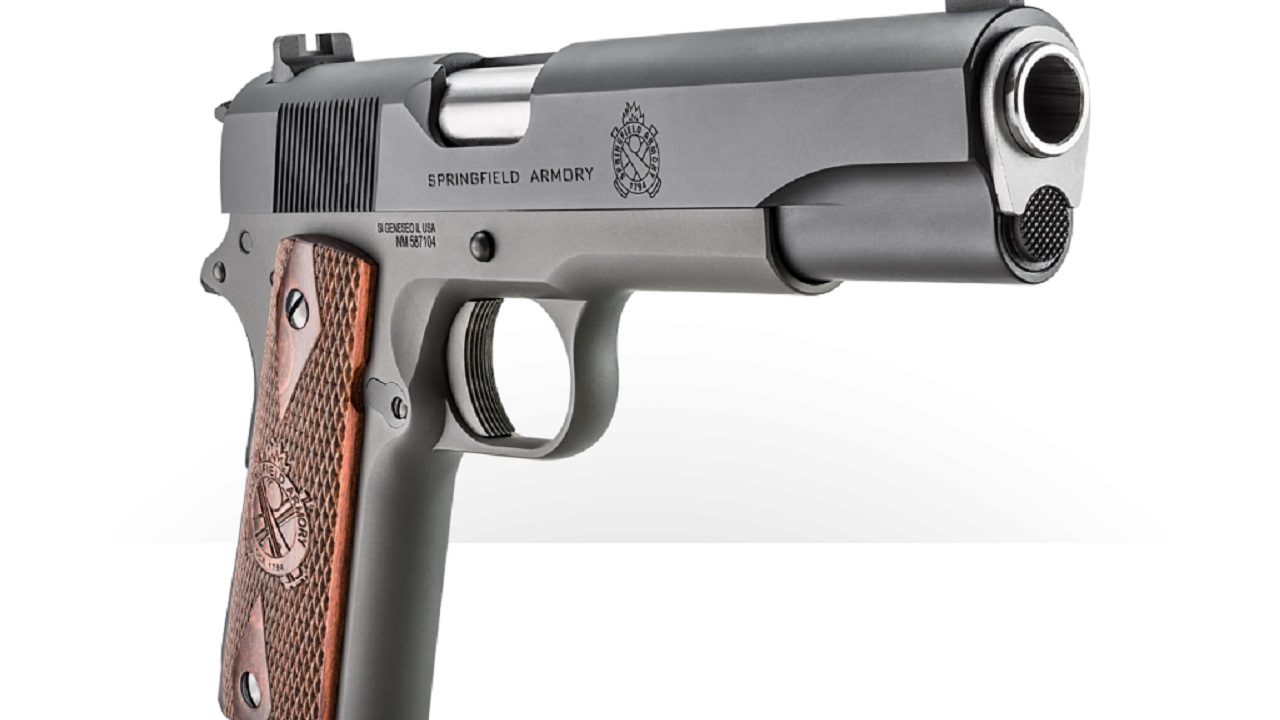 In recent articles on Glock pistols, I made some slightly critical comments about the M1911 series – sacrilege, I know. But this does not mean that I dislike the 1911 or the .45 ACP cartridge. Believe it or not, the 1911 was the second pistol platform I fell in love with, after the Beretta 92F. I first became a 1911 .45 fan at the tender age of 15, in October 1990, when I tried out a stainless steel Colt Series 80 Mk IV Government Model at the dear ol’ Los Angeles Gun Club.

My first two handgun purchases were both 1911s. They were both accurate and had crisp trigger pulls. But neither of them was reliable – neither could handle a measly 200 jam-free rounds with standard 230-grain full metal jacket “hardball,” let alone jacketed hollowpoints.

But the third time really was the charm, and I finally struck gold with the Springfield Armory Mil-Spec stainless steel M1911-A1.

Just for clarification, “Springfield Armory” within the context of this article does not refer to the original Springfield Armory in Springfield, Mass., which has been a national historic landmark since 1978, but rather to the company acquired by the Reese family in 1974 and headquartered in Geneseo, Ill.

By the mid-1980s, the company emerged as the first serious challenger to Colt’s longstanding name-brand domination of the 1911 pistol market. To give you folks an appreciation of the magnitude of this market coup, the .45 ACP cartridge’s acronym does in fact stand for “Automatic Colt Pistol.” Springfield’s 1911 clones quickly established a reputation for quality at prices that were considerably lower than Colt’s.

Alas, in 1992 the company fell upon troubled times and had to declare bankruptcy. Indeed, my very first 1911 purchase was a pre-bankruptcy Springfield specimen. For the record, the second one was a Charles Daly brand. Neither one of these guns would work properly after the obligatory 400-round break-in phase, not even after a trip back to the manufacturers for warranty service, or to competent gunsmiths.

Luckily when Springfield reorganized after bankruptcy, they got their act together. In the following decade, renowned gun writer and law enforcement veteran Massad F. Ayoob — himself a lifelong Colt guy — stated that, “Springfield Armory is now making the best guns of its existence.”

Taking Massad’s words to heart, I purchased the Springfield that broke my run of bad luck in 2003 from Belleville Shooting Range (now known as Metro Shooting Supplies) in Belleville, Ill. At the time I was a U.S. Air Force 2nd Lieutenant stationed at Scott AFB. I paid $550 for it back then, which equates to $885.71 in today’s money.

To my pleasant surprise, Mas Ayoob was right, by golly! Not only did it finally meet the reliability threshold of 200 jam-free rounds with factory hardball, it did so with jacketed hollowpoints as well! In the 19 years that I’ve owned this gun, the only times she has ever jammed on me were once when I way over-gooped the slide rails with Break-Free CLP (literally too much of a good thing), and again when I used a batch of really piss-poor Russian steel-case ammo that I had bought on the cheap at a gun show in Belleville. I estimate that I’ve put somewhere in the neighborhood of 20,000 rounds through this old girl in her lifetime.

Pros: Like I already said, I finally had a reliable 1911 — Glory Hallelujah! The only factory original parts on my Springfield that didn’t last were the black plastic grips, which cracked at roughly the 3,000-round mark and were replaced by a single-piece Pachmayr wraparound rubber grip.

Accuracy was good too; tight groups at 7 yards and 15 yards. At 25 yards, I can score head shots more than half the time, and the rounds will stay on the torso at 50 yards. Regarding that last distance, the late great Chuck Taylor opined many years ago that, “If your handgun possesses enough accuracy to hit a man in the chest at 50 meters, then you have more accuracy than you will probably ever need!” That said, the recent incident with a CCW hero in Indiana does show the benefits of having the means and ability to dial long-distance with a handgun.

Trigger pull is crisper than typical older GI-spec .45s. Speaking of GI specs, it does seem like a bit of misnomer to call Springfield’s stainless steel variant a “Mil-Spec,” since true military-issue 1911s had either a blue or Parkerized finish, but I ain’t complaining. Stainless steel is far more maintenance-friendly due to its superior resistance to rust, corrosion, and holster wear. And the high visibility sights are a damn sight better than the old military-issue .45s, which also aids practical accuracy.

As with any 1911, if you wish to customize your Springfield, the options and accessories are endless, as a quick peek through the Brownells catalog will tell you.

Cons: While the accuracy is good for a non-custom 1911, my SA Mil-Spec still isn’t nearly as accurate as my Glock 21SF or my Beretta M9. (You know, the gun that brewed up such a crap-storm of controversy when it replaced the M1911 as the U.S. Armed Forces standard-issue sidearm back in the 1980s.) The trigger, though adequate, still is a bit creepy and somewhat irritating to the touch of the index finger after an extended shooting session. And while I personally have never had any issues with the factory-stock grip safety, many of the same blindly loyal members of the 1911 cult who praise the gun’s ergonomics to the high heavens turn around and contradict themselves by insisting that the gun is painfully uncomfortable to shoot without an aftermarket beavertail grip safety.

Regarding the stainless-steel variant in particular, though it is maintenance-friendly, gunsmiths aren’t as fond of working on these variants because of stainless steel’s tendency toward galling.

Compared with newer makes from Beretta, Glock, and SIG, the 1911 is annoyingly more tricky and time-consuming to field-strip and reassemble: You have to deal with a separate barrel bushing, a recoil spring plug that can go flying off like a champagne cork, and a swinging barrel link. My big question for the 1911 purists: if the M1911 is truly the greatest thing since sliced bread, then why did its very own inventor, John Moses Browning, see fit to improve upon it by doing away with those extra parts when he designed the P-35 Browning Hi-Power?!?!?! Riddle me that, Batmen and Batgirls…

By the way, since I bought that Springfield 19 years ago, I have purchased three other 1911-pattern pistols: a coveted Colt Series 70 Combat Commander; an even more coveted, genuine First World War-era Colt M1911, made in October 1918; and a Colt 10mm Delta Elite. All three of them are plagued by the same reliability issues that afflicted my first two 1911s: stovepipe jams, failures to feed, double-feeds, extraction failures, the whole nine yards.

I can tell you that I have no such jamming problems with other makes and models chambered for .45 ACP, from the Glock 21SF and Glock 36 to the SIG Sauer P220 and the Smith & Wesson 4506. Further, I have competed in my fair share of IDPA, IPSC, and PPC matches, and I see far more choke-ups with 1911s than with any other pistol type. What’s more, even some of the 1911’s biggest fans, such as renowned gunsmiths Dave Lauck and the living legend Bill Wilson, will tell you that the 1911 typically needs extra work to be a reliable combat weapon. All of which firmly convinces me that without paying extra for a “factory custom” pistol like Kimber or Rock River Arms, 1911s like the Springfield Mil-Spec that are reliable out of the box are the exception, and not the rule.

As much as I love the 1911 pistol – especially my Springfield – I don’t have the cultist obsession with it that so many of its fans do. I guess you could call it more of a love-hate relationship for me. Feel free to hate me, y’all.