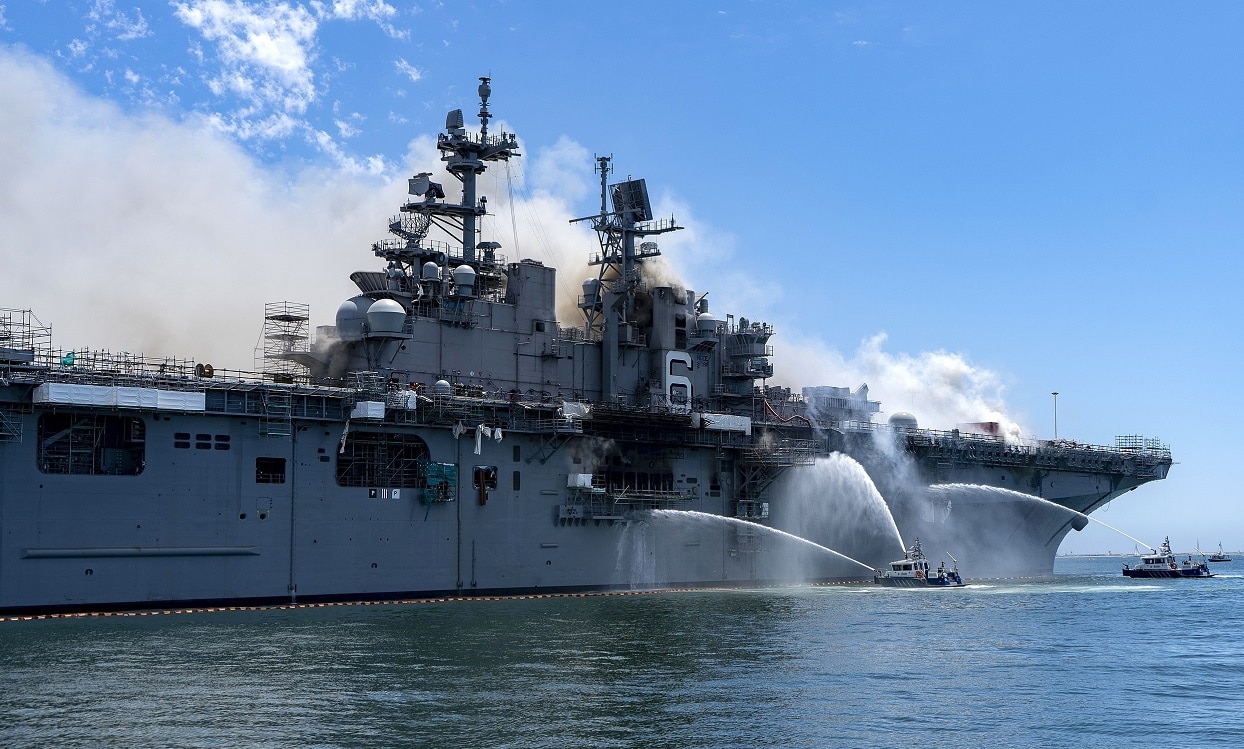 200712-N-BL599-1047.SAN DIEGO – Port of San Diego Harbor Police Department boats combat a fire on board USS Bonhomme Richard (LHD 6) at Naval Base San Diego, July 12. On the morning of July 12, a fire was called away aboard the ship while it was moored pier side at Naval Base San Diego. Local, base and shipboard firefighters responded to the fire. USS Bonhomme Richard is going through a maintenance availability, which began in 2018. (U.S. Navy photo by Mass Communication Specialist 3rd Class Christina Ross)

Not guilty. This week marked the climax of the court-martial of Seaman Recruit Ryan Mays, the sailor alleged to have put the torch to the amphibious warship USS Bonhomme Richard two years ago. The blaze raged for days while Bonhomme Richard was moored in San Diego undergoing deep maintenance, along with an upgrade to operate F-35B joint strike fighters. After surveying the wreckage, U.S. Navy leaders declared the capital ship a total loss and ordered it decommissioned and scrapped.

Seaman Mays opted to put his fate in a single jurist’s hands rather than endure a jury trial. The judge heard closing arguments from prosecutors and the defense team yesterday before pronouncing judgment today.

ProPublica, which styles itself “an independent, nonprofit newsroom,” has been on the Bonhomme Richard case—as it has been throughout the recent spate of naval disasters. Its latest reportage, which predates the Mays verdict, is well worth your while. A couple of points about l’affaire Bonhomme Richard are worth pounding home. One, the navy’s criminal case appeared shaky from the outset. It rested on testimony from a single shipmate who reported seeing Mays emerge from “lower V,” the ship’s lower vehicle storage area—a cavernous space for housing vehicles deep within the ship’s bowels—shortly before fire engulfed the compartment, and then the ship.

Why prosecutors chose to push a palpably weak case is a mystery.

The defense presented eyewitnesses who contradicted the prosecution. Mays’s defenders also produced evidence from the “command investigation,” an inquiry ordered by the navy leadership to evaluate the causes and handling of the fire. The command investigation divulged competing explanations for the fire’s outbreak that the defense—and apparently the judge—regarded as just as plausible as a disgruntled sailor’s malfeasance. (More on that below.) The command investigation proceeded in parallel with a criminal investigation undertaken by the Naval Criminal Investigative Service (NCIS) in concert with the Bureau of Alcohol, Tobacco, and Firearms. It was the latter inquiry that fingered Mays for aggravated arson and willfully hazarding a vessel.

So tenuous was the evidence brought by NCIS that after presiding over a probable-cause hearing last December, the judge, Captain Angela Tang, recommended that the navy refrain from taking the case to court-martial. She saw little chance of a conviction.

And two, the navy made the command investigation public. The report makes for reading that’s at once dreary and depressing and infuriating. Seaman Mays stood accused of willfully hazarding a vessel; the command investigation found that the leadership team on board Bonhomme Richard hazarded a vessel through neglect of its duty. (Top navy brass also ended up disciplining officers higher up the ship’s chain of command, all the way up to the three-star admiral commanding Pacific surface forces.)

Fire safety is a dangerous thing to neglect. Anyone who’s ever served in a warship undergoing a shipyard overhaul will tell you that ships are tinderboxes under industrial circumstances. Cables and hoses are strewn everywhere, compromising the ship’s watertight integrity. In other words, it’s hard to perform the first task of any fire party, shutting watertight doors to box in a fire and keep flames and smoke from spreading. “Hot work”—welding, brazing, and the like—is omnipresent, threatening to apply an ignition source to flammables that aren’t scrupulously safeguarded. Installed firefighting systems may be degraded or offline. And on and on.

In short, a ship’s defenses are at their feeblest during extreme peril.

To counteract that peril a crew has to redouble its vigilance and training when in the yards, doing its best to keep flammables in secure lockers or otherwise isolated from sparks and flames. And yet the lower V space on board Bonhomme Richard was reportedly littered with such combustibles as lithium-ion batteries, along with a forklift with exposed wiring that could have arced—furnishing an ignition source. After reviewing all of the alternative explanations, expert witnesses at the Mays trial testified that the fire’s cause must remain “undetermined.”

But if the cause remains undetermined, it’s clear why the fire raged unchecked once ignited: crewmen and their gear were unready. Like all U.S. warships, Bonhomme Richard was fitted with extensive firefighting systems, including “aqueous film-forming foam,” or AFFF, stations positioned to deposit foam on a fire. AFFF floats on burning liquid, smothers flames, and cools down fuel. To me the most damning passage in the command investigation report is this: “At no point in the firefighting effort were any of [the AFFF stations] used, in part because they were degraded, maintenance was not properly performed to keep them ready, and the crew lacked familiarity with their capability and availability.”

That last clause is the kicker. You activate AFFF by pushing a button. That demands no special skill. Yet no one tried pushing the button when fire erupted in the lower vehicle storage area. The Bonhomme Richard crew clearly suffered from a gross deficit in damage-control training, one of any ship’s first and foremost functions. There is a reason anyone who reports for duty aboard a ship of war, from the lowliest seaman to the loftiest captain, is required to qualify to fight fires and control flooding and other damage before moving on to his or her professional specialty. It’s to ward off catastrophes like this one. 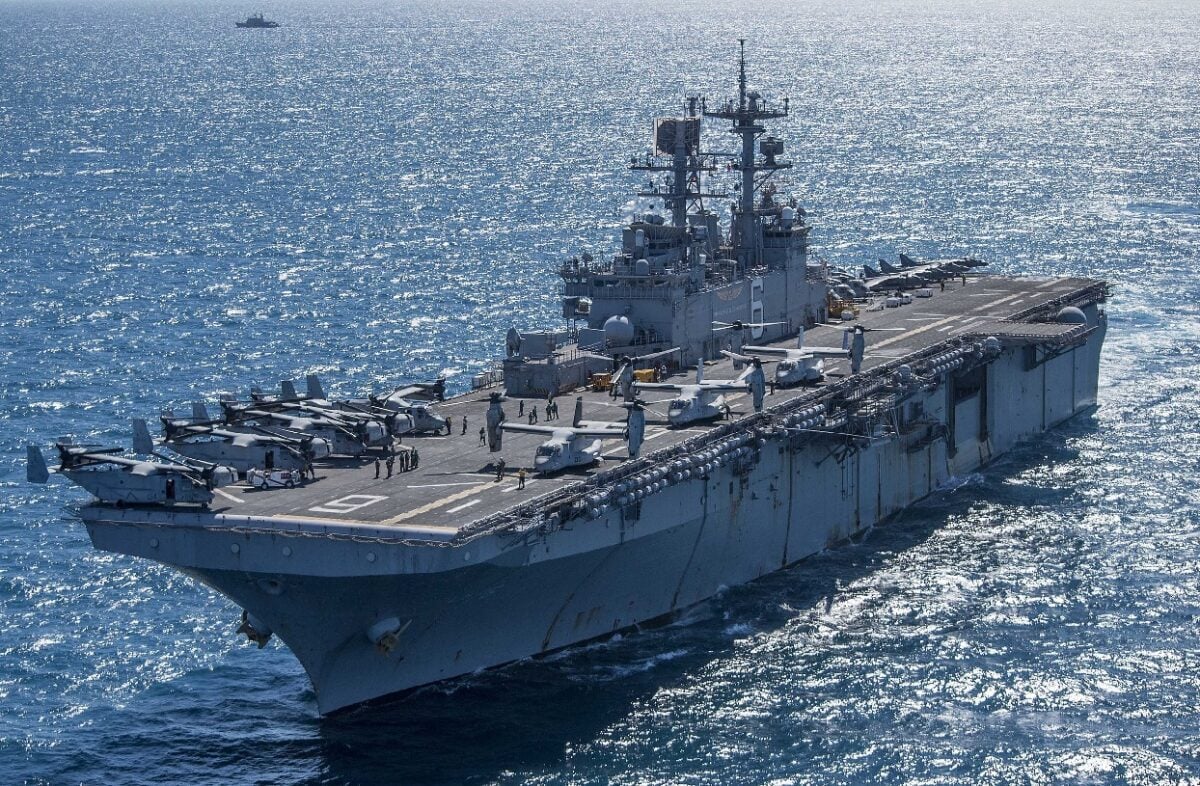 So that’s where things stand. No one can say for sure what or who ignited the Bonhomme Richard fire. But it’s pretty clear who allowed the makings of an inferno to accumulate.

You have to think justice prevailed today.

A 19FortyFive Contributing Editor, Dr. James Holmes is J. C. Wylie Chair of Maritime Strategy at the U.S. Naval War College and a Nonresident Fellow at the University of Georgia School of Public and International Affairs. The views voiced here are his alone.