NATO Had 5 Aircraft Carriers Patrolling: NATO has essentially created a ring around the waters of Europe, as five different aircraft carrier strike groups (CSGs) are now on patrol – highlighting the naval cooperation of the alliance. Last week, NATO announced that member navies would be conducting maneuvers in the Atlantic Ocean and the Mediterranean Sea throughout the rest of the month.

A total of five aircraft carriers, along with numerous other warships and thousands of sailors, would be taking part in the exercises. Carrier activities include anti-submarine and air warfare drills, deck-to-deck aircraft transfers, and at-sea resupplying.

“NATO routinely demonstrates its cohesion, coordinating with multiple international maritime assets at once,” said Vice Admiral Keith Blount, Commander, NATO Allied Maritime Command. “This opportunity demonstrates our ironclad commitment to the stability and security of the Euro-Atlantic Area and the strength of our collective capability. Five carriers within our operating area presents a further opportunity to consolidate our approach to air defence, cross-domain cooperation and maritime-land integration.”

“These operations present an opportunity for allied nations to coordinate credible combat power throughout the Euro/Atlantic area, while showcasing NATO cohesion and interoperability,” Deputy Pentagon Press Secretary Sabrina Singh said during last Thursday’s briefing at the Pentagon. “It is also an opportunity to test allied cooperation and to practice NATO’s deter and defend concepts across all geographic areas, operational domains and functional areas of the Alliance.”

Operations in the North Atlantic

The USS Gerald R. Ford (CVN-78), the world’s newest and largest warship, is currently on her maiden deployment and recently conducted a port-of-call visit to Portsmouth in the UK, and has been conducting drills alongside warships from Canada, Denmark, France, Germany, the Netherlands, and Spain.

The Royal Navy’s flagship HMS Queen Elizabeth had previously departed from Portsmouth on November 10, after returning from a visit to the United States as part of a bilateral naval security conference in New York City. The carrier was forced to step in for her sister carrier, HMS Prince of Wales, which suffered a propeller mishap and is currently undergoing repairs.

The French CSG departed Toulon on November 15 for deterrence patrols on NATO’s eastern flank and counter-terrorism operations in the Middle East. As part of Mission Antares, the French carrier will operate with ships from the Hellenic, Italian and American navies, with some 3,000 service members from France and partners taking part.

Also in the region are the ITS Cavour and USS George H.W. Bush (CVN-77). 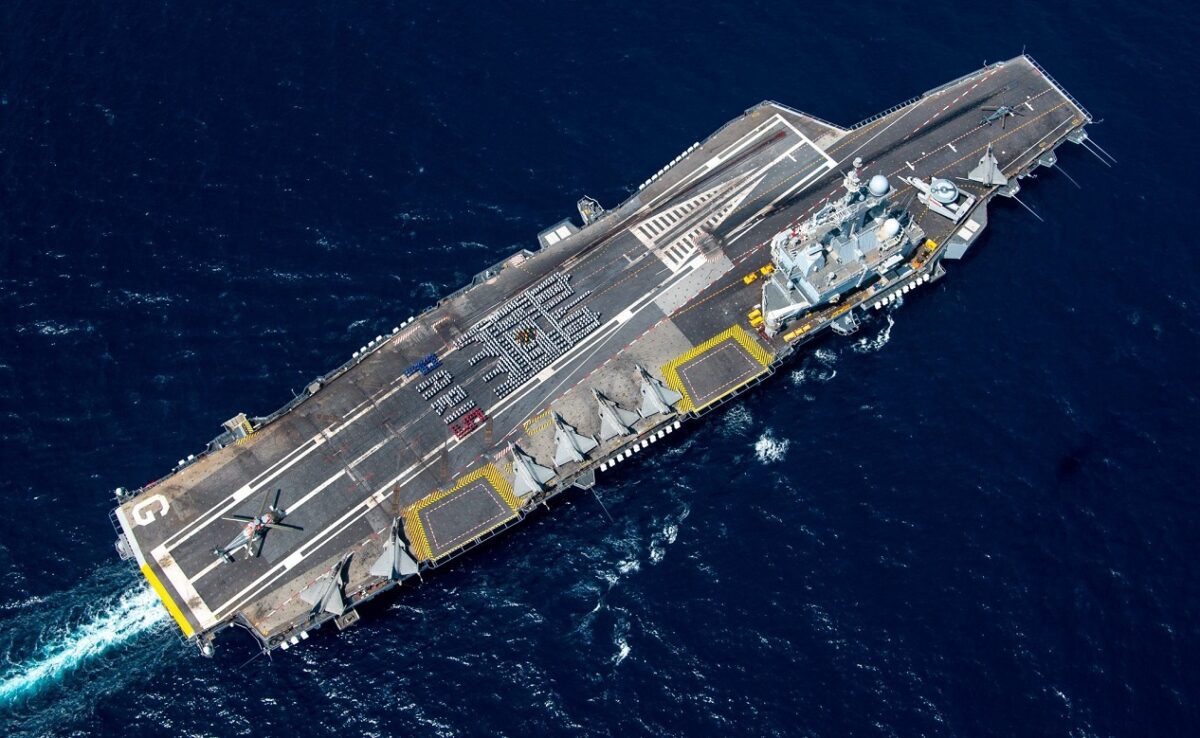 Absent from the drills is the aforementioned HMS Prince of Wales, which is certainly unfortunate as it is officially the NATO flagship.