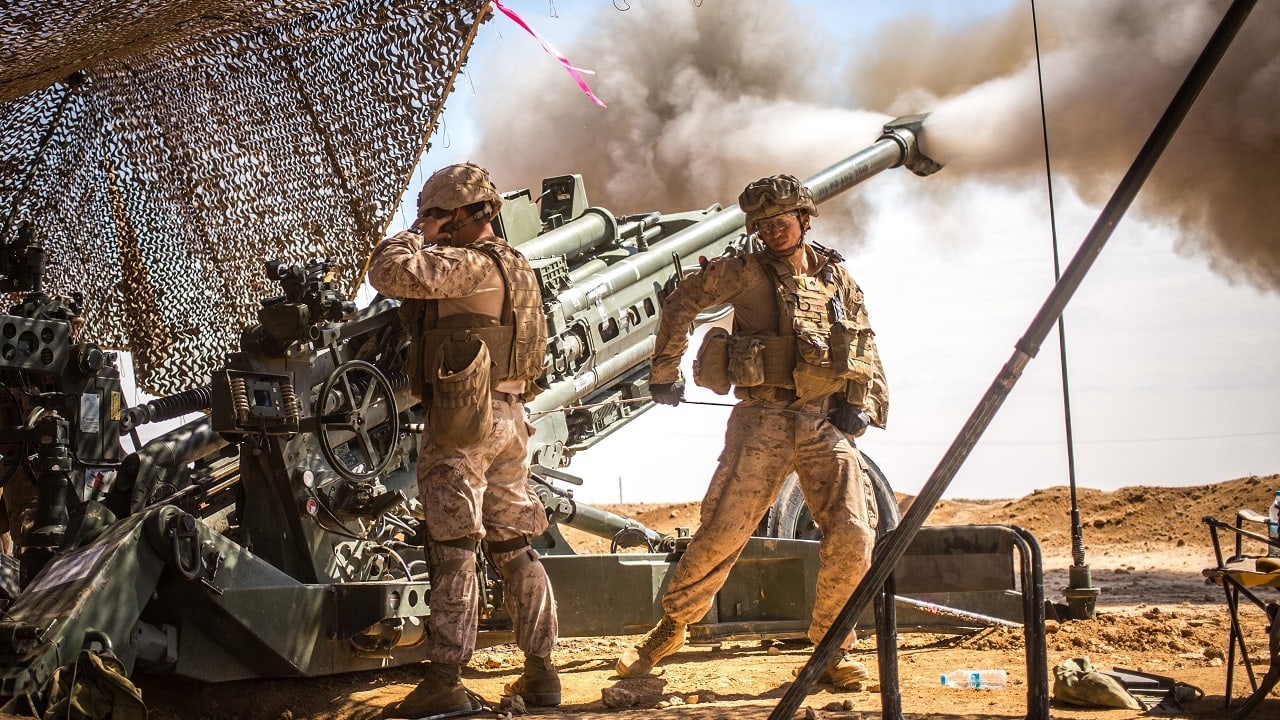 SYRIA - U.S. Marines with the 11th Marine Expeditionary Unit fire an M777 Howitzer during a fire mission in northern Syria as part of Operation Inherent Resolve, Mar. 24, 2017. The unit provided 24/7 support in all weather conditions to allow for troop movements, to include terrain denial and the subduing of enemy forces. More than 60 regional and international nations have joined together to enable partnered forces to defeat ISIS and restore stability and security. CJTF-OIR is the global Coalition to defeat ISIS in Iraq and Syria. (Note: these are similar weapons to the ones being sent to Ukraine).

This week Yomiuri Shimbun reported that the U.S. Marine Corps intends to found a Marine Littoral Regiment capable of island-hopping along Japan’s Ryukyus chain, which arcs from the southernmost home island of Kyushu, through Okinawa at the chain’s midpoint, almost to within sight of northern Taiwan. Small sensor- and missile-equipped detachments will comprise the new regiment, helping it scout out hostile naval and air forces and pummel them should they draw near.

The Marine Littoral Regiment constitutes part of Force Design 2030, Commandant David Berger’s concept for partly reconfiguring the Marine Corps as an access-denial force. Under the concept marines will fan out among the southwestern islands in concert with U.S. sea and air forces and the Japan Self-Defense Forces. Expeditionary units drawn from the regiment will “stand in,” defying China’s anti-access arsenal, rather than stand off for the sake of force protection.

And yield geographic space to China by default. The Marine Corps and the allies will refuse to give ground.

The regiment’s twin goals: to deny China’s People’s Liberation Army (PLA) access to the southwestern islands, safeguarding sovereign Japanese territory, and to deny Chinese naval and mercantile shipping the ability to transit the waters between the islands. Defend the islands while barring the straits and you cement the island chain into an offshore Great Wall in reverse—a fortified geographic barrier guarded by American and Japanese sentinels.

In turn you imprison the PLA Navy and Air Force within the China seas, depriving them of maneuver space that’s essential to bluewater operations.

It’s a truism in military strategy, as in sports, that the home team commands an innate edge over any visiting team. Its bases, forces, and manpower are nearby, as are likely battlegrounds. It knows the physical and human terrain better than any visitor could. Etc. China has leveraged its home-field advantage vis-à-vis U.S. and allied forces, strewing cruise, ballistic, and hypersonic missiles and missile-armed aircraft along its coastal zones. Operating in conjunction with the PLA Navy’s fleet of submarines and surface patrol craft, these shore-based implements of sea power can make things tough even on a stronger visiting team.

But what if two home teams square off? Japanese and Chinese armed forces play on the same fields, so they enjoy similar advantages. These Asian heavyweights have waged a back-and-forth series since the seventh century. Japan has dominated Sino-Japanese contests since the 1890s; China wants the championship back. If China is tapping the logic of home-field advantage, the United States and Japan are belatedly repaying the compliment, putting strategic geography, alliance diplomacy, and maritime might to work for themselves.

In short, the allies are harnessing their own advantages. One hopes their nautical Great Wall proves so forbidding that it deters China from trying to breach it. If so we will never learn who wins when home team meets home team on the field of battle.

And not knowing will be fine.

Now, as U.S. Marines and their comrades chart strategy and operations in the Ryukyus, they should take heed of Carl von Clausewitz’s sage counsel on “cordon warfare.” An offshore Great Wall is nothing more than a distended defensive perimeter with immovable guard towers, namely the islands themselves. Clausewitz vests little faith in defensive lines. “The obstacle they offer the attacker,” he maintains, is “worthless without powerful fire to support it. Otherwise it is good for nothing.”

Clausewitz was thinking mainly of armies trying to protect extended lines during land warfare in nineteenth-century Europe. That was his experience. But his warnings are sound even in twenty-first-century Asia. Think about perimeter defense in algebraic terms. By definition any line is a series of infinitely many points, while the contender that can mass superior force at any given point tends to prevail in combat. No defender can be stronger than its likely foe at infinitely many points, so the edge goes to the attacker. The attacker simply masses combat power at some point along the line, overwhelms the defenders, and punches through.

Clausewitz’s remedy is to keep defense perimeters short while using artillery to offset the mismatch between ground forces at a particular place and time. Marines and their Japanese allies can’t shorten the defensive line along the Ryukyus—the islands are where they are—but at the same time the islands are fixed and immovable on the map. This is an advantage of considerable scope. No Chinese merchantman or PLA Navy ship of war can plow through an island. In the end, then, the challenge of island-chain defense is all about keeping PLA amphibious forces from landing along the Ryukyus while barricading the straits.

This is a sturdy defense line.

Straits are narrow seas by definition. So think about the Ryukyu defensive line as a series of short interlocking cordons overshadowed by missiles fired from shore, sea, or aloft. That’s a workable operational design. Despite his misgivings toward cordon warfare, in fact, the Prussian master might crack a smile if he beheld Force Design 2030 in action.

A 19FortyFive Contributing Editor, Dr. James Holmes is J. C. Wylie Chair of Maritime Strategy at the Naval War College and a Nonresident Fellow at the Brute Krulak Center for Innovation and Future Warfare, Marine Corps University. The views voiced here are his alone.