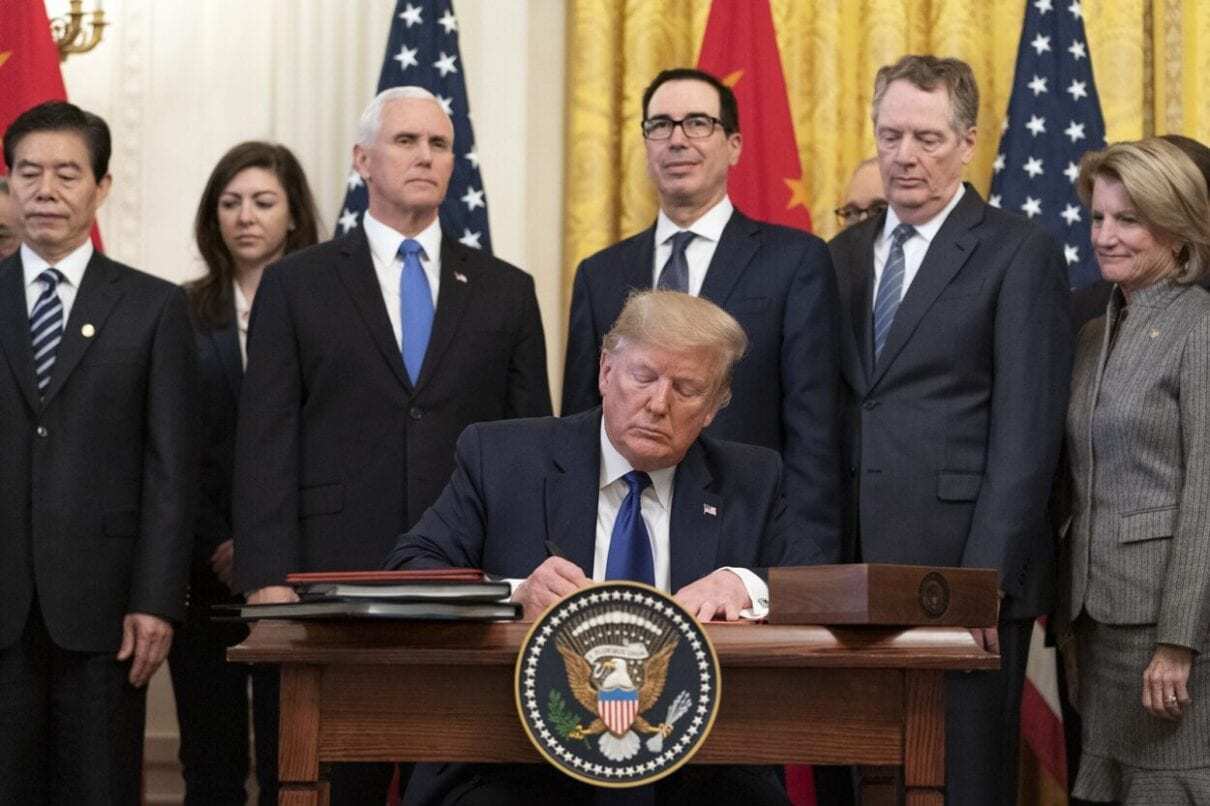 Signing Ceremony Phase One Trade Deal Between the U.S. & China

Of course, the Trump administration is going to exaggerate claims about the success of its “Phase One” trade deal with China. That’s no surprise. And, of course, Trump’s detractors won’t let the administration get away with such claims. Exposing Trump’s trade follies—“tariffs are taxes,” “tariffs haven’t brought back supply chains or manufacturing jobs,” “farmers have been pummeled,” “trade wars are neither good nor easy to win”—is just too much fun to resist.

But, at some point—like now, for instance—the unity we pro-trade, pro-globalization voices find in our opposition to Trump’s trade policy must give way to a serious debate about what, exactly, trade policy toward China should look like after Trump. Unless the Biden folks are considering some form of continuation of Trump’s Phase One deal—a devastatingly bad idea that Biden should disavow—there is little purpose (other than rubbing Trump’s nose in it) in demonstrating how the objectives have not been met.

It’s easy to criticize policies you don’t like, but much harder to move from favored policy generalities to specifics. We need to start putting some meat on the bones of those general slogans—aspirational statements like “we must work with allies,” “restore U.S. leadership,” and “reform the World Trade Organization”—that have been bandied about as placeholders for specific, realistic policy objectives, strategies, and tactics.

If you think we must “work with allies” to try to rein in some of Beijing’s objectionable behavior, then the success or failure of the Phase One trade deal is irrelevant. The deal must be terminated, period. Why? Because the deal sanctions discrimination against European, Japanese, Korean, Canadian, Australian, Indian, and all other countries’ exporters. It is an arrangement that formally puts U.S. suppliers on a more favorable footing with Chinese buyers—that is, with the Chinese government. Working with allies requires a globalist, not a nationalist approach.

How can we effectively “work with allies” to discipline China’s behavior while, at the same time, expecting those allies to accept being squeezed out of the China market by our bilateral trade deal? We can’t because the trade deal is the antithesis of working with allies. If the United States and the European Union are going to have any chance of showing a united front against a Chinese government that has succeeded over the years in driving wedge’s between the western powers, the Phase One deal—that ill‐​conceived edifice of America‐​first nationalism—cannot stand. So why measure and make such a big deal about progress or the lack thereof…unless Biden’s team is contemplating continuity?

If you think the United States should “show leadership” or “lead on trade,” as the tweets echo ad nauseum without elaborating on exactly where to lead, then U.S. policymakers and opinion leaders should eschew and speak out against these kinds of discriminatory, managed trade deals. Otherwise, U.S. leadership will continue to set bad examples, encouraging other countries to emulate our transactional, bilateral, deal cutting. We should want the United States to lead on trade, but in a liberalizing, non‐​discriminatory direction. Right, Joe?

If you consider the Trump administration’s assault on the World Trade Organization—its strangling of the Appellate Body, threats to withdraw, and refusal to endorse a new Director General—to be terrible mistakes and believe the United States should commit to reforming the World Trade Organization, then you must regard the U.S.-China trade war and the Phase One trade deal, both conducted in violation of the rules of the WTO, as ongoing impediments to reform.

Whether the Phase One trade deal has lived up to its objectives is, arguably, a question of empirical interest at most—unless Biden’s team is considering some form of continuation. Of course, that choice would short-circuit the general goals of working with allies, showing leadership, and reforming the WTO.

This first appeared in CATO’s excellent blog CATO At Liberty.