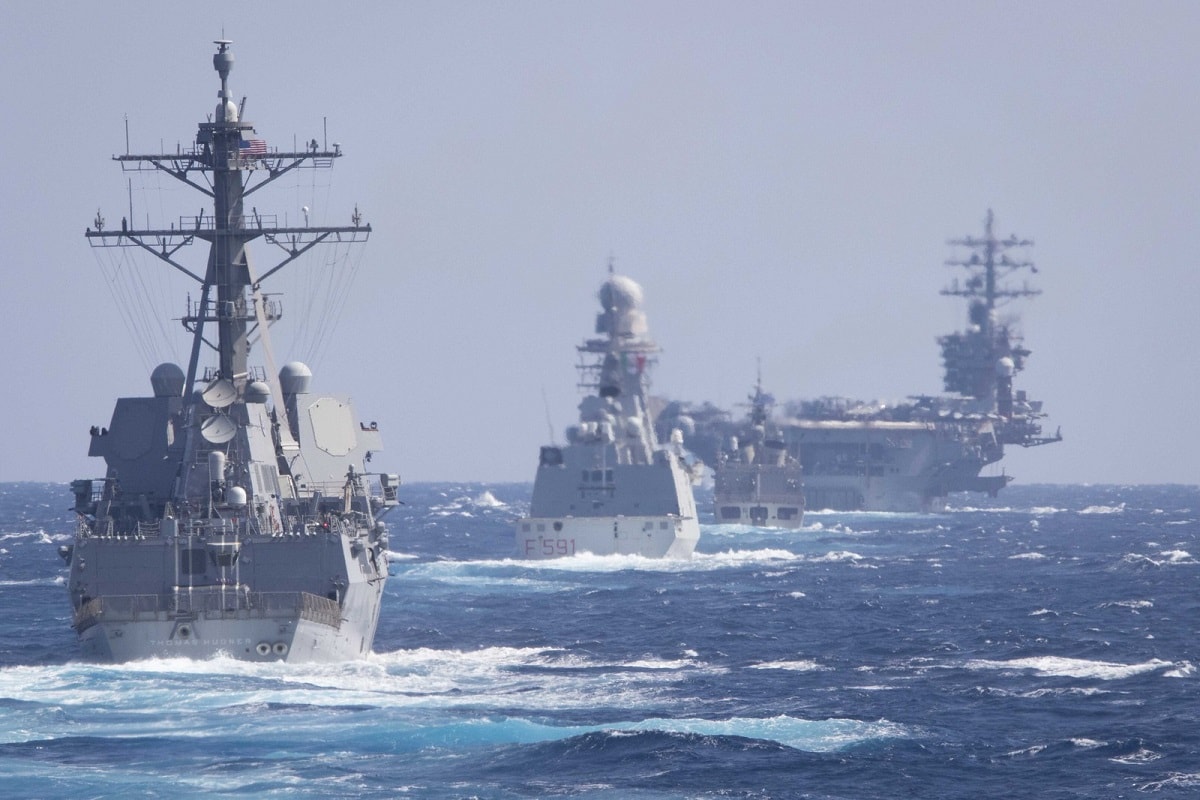 The competitor who blunders the least wins.

That’s what the ancients seemed to believe, at any rate. Athenian and Spartan grandees sized up their soon-to-be foes in 432 B.C., sketching policies and strategies for waging what would come to be known as the Peloponnesian War. Judging from their prewar speeches, the Athenian “first citizen” Pericles agreed with the Spartan king Archidamus that mistakes can play a glaring if not decisive part in war-making.

Archidamus told Spartans to hope for enemy blunders but not to count on them. “In practice,” he vouchsafed, “we always base our preparations against an enemy on the assumption that his plans are good; indeed, it is right to rest our hopes not on a belief in his blunders, but on the soundness of our provisions.” Better to compete competently than entrust one’s strategic fortunes to enemy incompetence. For his part Pericles entreated Athenians to refrain from trying to expand their empire. They should husband and concentrate their resources for a protracted struggle. He professed confidence in the ultimate outcome if they abided by his strategic counsel. Conserving mistakes was uppermost for him: “I am more afraid of our own blunders than of the enemy’s devices.” Hence the need to forego adventurism.

Both antagonists committed their share of mistakes during the twenty-seven-year conflict, but the course of events bore out Pericles’ fears. (The first citizen did not live to see his prophecy fulfilled. He was felled by the plague that afflicted the city early in the war.) Most egregiously, Athenians heeded the advice of the adventurer Alcibiades, committing their entire expeditionary army and fleet to an invasion of Sicily in 415 B.C. Catastrophe resulted when the Athenian assembly and the expedition’s commanders mishandled the campaign in almost every way conceivable. In fact, the entire force was lost in combat against the Sicilian city-state of Syracuse. That’s a mistake of epic proportions.

Now consider the state of the U.S.-China strategic competition through Greek eyes. Which contender does the balance of error favor?

This is far from an idle debate. Last week Admiral Philip Davidson, who heads up the U.S. Indo-Pacific Command, went before the U.S. Senate Armed Services Committee to make his pitch for the command’s budget and address the U.S.-China competition. He voiced concern that Beijing may be accelerating its campaign to replace the U.S.-led international order with something more to Chinese Communist Party chieftains’ liking. Davidson forecast, moreover, that China might well try to seize Taiwan by the end of this decade: “I think the threat is manifest during this decade, in fact in the next six years.”

If indeed the countdown to the conflict has started, who has blundered least up to now and is best positioned for martial strife? It’s tough to say with precision, if only because the United States and its allies and partners are open societies by and large. They are given to beating themselves up in public, much like classical Athens, a direct democracy. China is anything but an open society. Beijing divulges as little as possible about its internal affairs while constantly hectoring (or worse) the state, military, and populace to follow the party line. It projects the—doubtless exaggerated—image of an ultracompetent competitor. Still, let’s sample some of the competitors’ more fateful blunders and venture a guess as to which is more error-prone.

Look at America first. The United States faces questions about its power and resolve. Take resolve first. Over the past four years Washington repeatedly suggested that it did not regard solemn international covenants—the security alliances with Japan and South Korea, for example—as sacrosanct. Doubts about U.S. steadfastness likely linger in allied capitals even though the U.S. government is under new management. Diplomatic damage remains to be repaired—one reason why Secretary of Defense Lloyd Austin and Secretary of State Anthony Blinken are currently barnstorming the region.

But U.S. mistakes go beyond politics. Down on the strategic and operational levels, there’s a come-and-go character to U.S. naval operations that blunts their effectiveness. “Freedom of navigation” operations (FONOPs), for instance, are important and must continue. They have legal import, demonstrating that the United States rejects excessive claims to maritime jurisdiction—China’s claim that it enjoys “indisputable sovereignty” throughout most of the South China Sea being the most prominent example. But FONOPs are not a military deterrent. U.S. warships pass through contested waters and leave—leaving China’s maritime militia, coast guard, and navy dominating these expanses at Southeast Asians’ expense. It’s not enough to come and go; U.S. forces must go and stay to have meaningful impact.

And then there are travails in the procurement realm. In large part peacetime strategy is about fashioning military implements to support policy. The United States has clearly fallen short in this realm. Seldom in the past two decades have new platforms come in on time and on budget. Ford-class aircraft carriers, Zumwalt-class guided-missile destroyers, littoral combat ships—pick your favorite program and chances are delays and cost overruns feature prominently in the story of that program. The more a program costs, the fewer copies of a platform or weapon the U.S. military can afford. U.S. military might shrinks and becomes concentrated in fewer and fewer implements. For instance, the Zumwalt program went from a robust thirty-two hulls to . . . three.

Pericles and Archidamus would shake their heads in dismay at America’s performance in diplomacy, strategy, and weapons acquisitions.

Fortunately for the United States, though, China may be even more inept. It may be hard for outsiders to peek inside the shiny new hardware fielded by the People’s Liberation Army (PLA) over the past quarter-century. Chinese warships, planes, and other military implements are “black boxes” to foreign observers in peacetime, and PLA commanders jealously guard their secrets. It is safe to say China is not immune to R&D and manufacturing woes of its own, to say nothing of Murphy’s Law. Gauging their magnitude is a matter for Western intelligence communities.

Diplomacy is another question. Until about a decade ago China-watchers, including yours truly, marveled at Beijing’s assiduous efforts to amass “soft power” and ease worries about its swift rise to regional economic and military prominence. That was smart diplomacy. The Ming Dynasty admiral Zheng He was the beneficent face of China’s “charm offensive,” a.k.a. “smile diplomacy” toward fellow Asians. Because Zheng He voyaged through Southeast and South Asia without attempting territorial conquest, went the narrative, Communist China was incapable of abusing its neighbors. It was a new, benign type of sea power—in sharp contrast to Western empires of bygone centuries.

Then Beijing summarily jettisoned its charm offensive. No longer was Zheng He the face of Chinese regional diplomacy. The “Hegemonic King” extolled in Sun Tzu’s classic treatise The Art of War—a contender so strong and resolute that it overawed its neighbors and kept them from making common cause against it—made a better model for the new approach. Soft power no longer meant a power of civilizational attraction that lulled target audiences into acquiescence; it meant the ability to intimidate.

And indeed, over the past decade Chinese officialdom has seemingly gone out of its way to affront China’s neighbors. It glowers rather than smile. China’s foreign minister publicly dressed down his Southeast Asian counterparts: “China is a big country and other countries are small countries and that is just a fact.” Might makes right. Beijing has repeatedly deployed the maritime militia, coast guard, and navy to bully Southeast Asians and deny them their maritime rights as codified by treaty. It flouted an international court ruling striking down its claims. It has repeatedly stoked conflict with India, its giant nuclear-armed neighbor. And on and on.

In short, Beijing is guilty of foreseeably self-defeating behavior. At this juncture it’s doubtful it could reinstate the softly, softly approach even if Xi Jinping and his henchmen wanted to. Memories run long. No one would believe fresh assurances of China’s benign intent. Small wonder China’s bench of allies and partners is shallow and unimpressive while America’s is deep—and getting deeper. It is possible that Beijing has committed fewer mistakes than Washington in the strategic competition to date—but its diplomatic malpractice is a real doozy.

That the balance of folly favors the United States and its friends is no cause for complacency, though. Carl von Clausewitz counsels that failure is always an option in strategic competition or warfare. Clausewitz would concur with King Archidamus: it’s natural to hope an antagonist will blunder, and to welcome and exploit such blunders when they occur. It is unsafe to depend on an opponent to defeat itself.

Let’s up our game—and be safe.

James Holmes is J. C. Wylie Chair of Maritime Strategy at the Naval War College and Contributing Editor at 19FortyFive. The views voiced here are his alone.