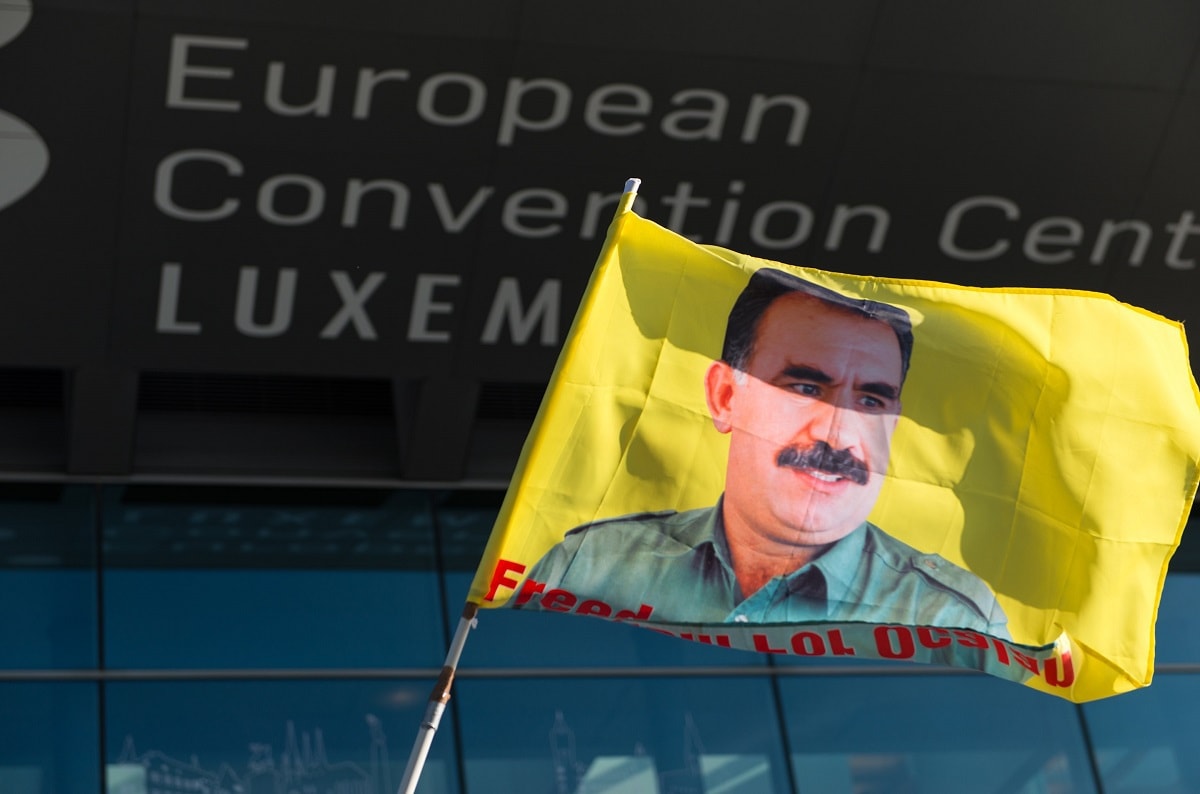 A flag with the face of Abudllah Ocalan at a Pro-Kurdish rally in Brussels, Belgium

Abdullah Öcalan, the Kurdish leader imprisoned by Turkey for the past 22 years may be dead.

On March 14, rumors erupted on Turkish social media that Öcalan, founder of the Kurdistan Workers Party (PKK) had died in the Turkish prison where he has been in solitary confinement. Turkish authorities last let his lawyers visit him in August 2017, and the prison administration last allowed him a phone call in April 2020.

Many Kurds consider Öcalan to be their Nelson Mandela, a freedom fighter-turned-prisoner who they insist can be a unifying political leader if released. Most Turks, however, view the PKK leader as a mass murderer, responsible for an insurgency and terror campaign that claimed tens of thousands of lives. In 1997, the U.S. State Department designated the PKK to be a terrorist group against the backdrop of a Clinton administration effort to finalize a multibillion arms deal with Ankara. (In recent years, European courts have reversed their similar designations).

Not surprisingly, Kurds mourned and Turks celebrated when, in 1999, an elite Turkish commando unit captured him in Nairobi. Turks paraded him before television cameras and coerced numerous confessions, many ridiculous. Turkey claimed, for example, that Ocalan had fingered his ex-wife in the 1986 assassination of Swedish Prime Minister Olof Palme; a subsequent investigation named Swedish graphic designer Stig Engström as the assailant.

While a generation of Turkish politicians deemed the humiliated and imprisoned Öcalan no longer relevant, it was Recep Tayyip Erdoğan, then-prime minister, who a decade ago acknowledged Öcalan’s role as the indispensable Kurd when he authorized peace talks between Öcalan and the Turkish intelligence service. That process did not achieve peace, but it was impossible for Ankara to again declare Öcalan’s irrelevant.

Öcalan spent his prison years productively. He penned a number of treatises culminating in the abandonment of his previous separatism for what he deems “democratic confederalism.” In Kurdistan Rising? I assess his philosophy critically but it is impossible to deny its relevance and broad acceptance among Kurdish communities from Kobane to Kermanshah. Simply put, the PKK has evolved.

If Öcalan is indeed dead, what might that mean for Turkey, the Kurds, and the region?

The fact that he died in a Turkish prison will exacerbate inter-ethnic tensions in Turkey. Öcalan’s brother Mehmet has already blamed the Turkish government. The distrust Öcalan’s death will generate will underscore the reality that Turkey will not know peace until it accepts federalism. Turkish authorities will generate even more anger if they bury Öcalan in a restricted military zone or cremate him in order to prevent his grave from becoming a site of pilgrimage. Their concern is valid: Kurds will flock to Öcalan’s tomb to pay their respect in numbers that will undermine Turkey’s Kemalist ideals.

Those who hope the PKK might fracture or disappear after its founder’s death, however, are mistaken. Certainly, an Öcalan personality cult infuses the PKK, but no less so than the cults of Mustafa Kemal Atatürk and Erdoğan as well permeate Turkey, or Masoud Barzani’s cult dominates Iraqi Kurdistan. There are important differences, however. First, Öcalan’s political movement has already survived and, indeed, thrived absent his direct leadership for 22 years. While Erdoğan and Barzani concentrate power within their family, Öcalan’s movement has delegated responsibility and empowered a dynamic bureaucracy that will survive him. While the PKK might spin-off different political parties as in northeastern Syria, these will always provide a more durable base than the one-man rule that provides the model across the rest of the region. Simply put, for most Kurds today, Öcalan represents progressivism while Erdoğan and Barzani represent regressive autocracy.

Turkey and its trading partners in the European Union and the United States may wish that the “PKK problem” would simply disappear with Öcalan but it will not. This, however, gives both Turks and their partners in the West an opportunity to reassess their postures. For too long, Turkey and its media have indoctrinated Turks to demonize the broad array of Kurdish political organizations as PKK and therefore stigmatize them all as terrorists.

With Öcalan gone, they might use bury the terrorism label with the PKK founder and begin to engage with a reality that will not disappear.