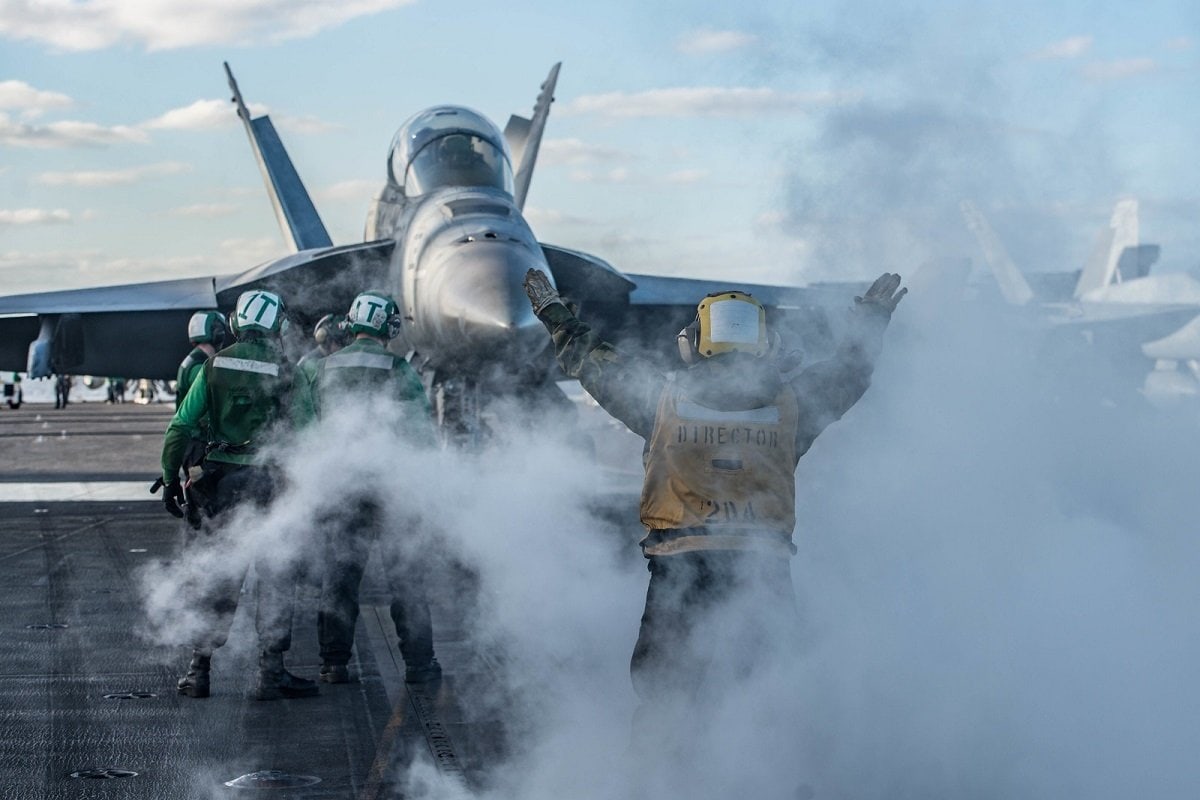 CORAL SEA (July 14, 2019) Aviation Boatswain’s Mate (Handling) 3rd Class Ashley Folds, from New York, directs an F/A-18F Super Hornet from Strike Fighter Squadron (VFA) 102 into launch position on the flight deck aboard the Navy’s forward-deployed aircraft carrier USS Ronald Reagan (CVN 76). Ronald Reagan is participating in Talisman Sabre 2019, which illustrates the closeness of the Australian and U.S. alliance and the strength of the military-to-military relationship. It is the eighth iteration of this exercise. Ronald Reagan, the flagship of Carrier Strike Group 5, provides a combat-ready force that protects and defends the collective maritime interests of its allies and partners in the Indo-Pacific region. (U.S. Navy photo by Mass Communication Specialist 2nd Class Janweb B. Lagazo/Released) 190714-N-CL027-1239

On March 23, U.S. Navy Adm. John Aquilino, President Biden’s nominee to be the next Indo-Pacific Command commander, testified during his confirmation hearing that the threat to Taiwan from an increasingly aggressive China is “closer than we think” and that the United States needs to be “prepared today” to defend its longtime ally. The admiral stated his assessment was opinion, not an assertion based on new intelligence or reporting. Indeed, he acknowledged one could only speculate as to when China would attack Taiwan – “today… six years… 2045.” China’s leadership, however, may conclude that the country’s demographic trends present a “now or never” moment.

According to United Nations data on the Chinese population, the country will contend with the confluence of two major demographic challenges beginning in 2023.

First, the aging of China. Even as China’s economy is now the world’s largest, numerous scholars have demonstrated how China will likely become old before it becomes rich. China’s economic growth has been unprecedented but it has still resulted in two complementary consequences — rising longevity coupled with a declining fertility rate. However, the Chinese government compounded the latter by enforcing the “one-child policy” from 1980 to 2016.

Accordingly, in one generation China will grow old to a degree it took Europe to age between 1930 and 2030. Between 2023 and 2032, the elderly population aged 60–69 will increase from 158.1 million to 220 million, while the younger population aged 30–39 will decrease from 233 million to 170.3 million during the same period. Unfortunately, China will not have accrued the national wealth or have established commensurate social insurance systems to cope with the eventual number of seniors. More dauntingly, Chinese seniors will have far fewer family members to rely on and will have few employment options that do not entail rigorous physical labor.

Second, the growing surplus of males in China. The “one-child” policy inadvertently prompted families to favor male children which then resulted in unhealthy male-to-female ratios. Consequently, this societal preference will produce a sizable subclass of young males unable to find a wife and start a family; these men are currently known as guang gun-er or “bare branches.” According to United Nations data, the surplus male population in China aged 10–49 will total an estimated 36 million in 2023 and remain above that level for the next decade before beginning to decline again.

Sociologists have demonstrated that young adult men with no stake in society are much more prone to attempt to improve their situation through violent and anti-social behavior in a “strategy of coalitional aggression with other bare branches” (e.g. gangs, crime syndicates, cults, militias). The responses available to the government can be problematic. Either a government attempts to socially re-engineer the population or simply repress it, but the former is too costly and the latter would further harm the country’s international reputation.

The prospect of failing to attain the level of economic development before its elderly population places an unbearable strain on the country’s economy while simultaneously coping with tens of millions of idle and alienated young men may present the vaunted Chinese Communist technocracy with a challenge beyond its capabilities. “At some point, governments [will] consider how they can export their problem, either by encouraging emigration of young adult men or harnessing their energies in martial adventures abroad.”

Since 1989, the population’s continuing acceptance of the nation’s authoritarian leadership is premised principally on the leadership’s ability to sustain high rates of economic growth. Fatefully, however, the leadership has sought to augment its legitimacy by simultaneously appealing to nationalism. If the leadership fails to achieve the necessary economic growth to assure the future of surplus males or the security of an aging population, it will face a grave threat to its legitimacy and may turn to overtly aggressive nationalism as a corrective.

The present governing elite act is extremely anxious and monitors all nationalist outpourings very closely to ensure public anger does not rage out of control. However, in the 2023–2032 period, Chinese leadership may decide whipping up nationalist fervor would be a reasonable gamble. Instead of dealing with the prospect of an aged population foiling economic plans and disaffected bare branches disrupting the domestic peace, the leadership may ultimately decide to rally the nation — validate the Middle Kingdom’s reclamation of great power status or forgo reunification for another century — and make a bid to reclaim Taiwan by force.

A fantastic scenario, but consider the decision by Imperial Japan in 1941 to declare war against the United States despite the overwhelming industrial and military strength of the latter.

Japanese aggression was the root cause of the subsequent war, but the specific decision to attack America in winter 1941 was dictated by national pride and its threatened economic destruction in the form of the oil embargo enacted in June 1941.

The Japanese leadership concluded acceding to American demands was unacceptable as yielding would essentially entail renouncing great power status, which no self-respecting government would ever do. However, to stand still and do nothing would have meant collapse. Indeed, Japanese leaders considered the embargo itself an act of war. Faced with such alternatives, national self-respect will always prevail. “War — even a lost war — was clearly preferable to humiliation.”

Beginning in 2023, the Chinese leadership may conclude the nation is facing the same dilemma with dangerous repercussions for regional peace.

R. Jordan Prescott is a private contractor working in defense and national security since 2002. He has been published in RealClearDefense, The National Interest, Small Wars Journal, and Modern War.