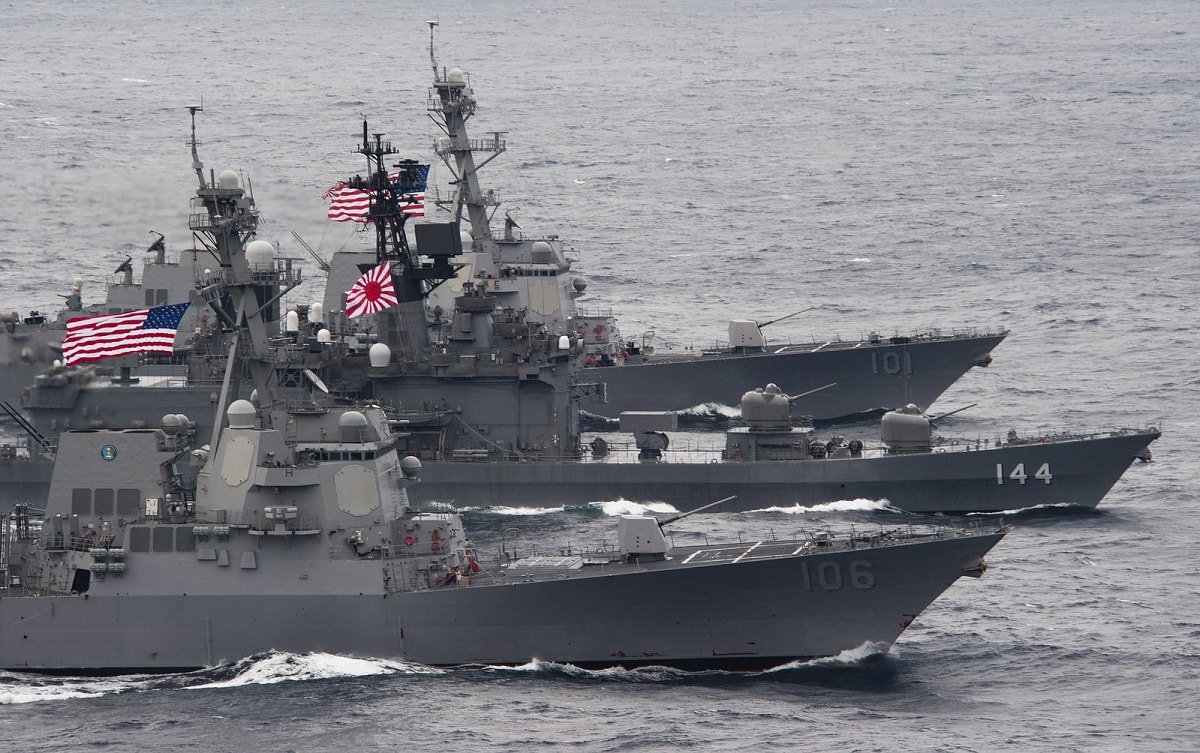 It’s one way to understand China’s maritime strategy in the Western Pacific. It’s also a way for the American sea services to plot strategy to deny China’s People’s Liberation Army Navy control of the sea, defeating Beijing’s purposes; to wrest control of the sea from China, granting the U.S. Navy and Marine Corps the liberty to use the sea lanes for their own purposes; and to project power as necessary to convert victory at sea into wartime triumph.

Why Mao Zedong, one of history’s most bloodstained butchers? Because Chinese Communist Party and PLA potentates found their approach to war-making on the party’s founding chairman, for one thing. In 2015 the Ministry of National Defense released its first official statement of China’s Military Strategy. Proclaims the directive with admirable clarity, “The strategic concept of active defense is the essence of the [CCP’s] military strategic thought.” Active defense was the core of Mao’s approach to military strategy, distilled from “the long-term practice of revolutionary wars.” And it remains the essence of Communist China’s way of war four-plus decades after the Great Helmsman went to his reward.

Not just an interesting or relevant concept, but the essence of the party’s martial worldview. The “complete set of strategic concepts of active defense,” says China’s Military Strategy, boils down to “adherence to the unity of strategic defense and operational and tactical offense.” China’s armed forces might be weaker than an antagonist’s on the whole. Indeed, they were weaker at the outset during Mao’s lifetime—an inconvenient fact that spurred him to devise the concept of active defense. But the CCP chairman pointed out that PLA commanders need not despair. They must not foreswear an offensive fighting spirit and methods in the face of overbearing enemies. Indeed, the Red Army could overpower and annihilate individual segments of a hostile force at a particular place on the map at a particular time.

The segment-by-segment approach, said Mao, was like lopping off an adversary’s fingers one by one. Keep chopping and sooner or later the adversary can no longer make a fist. Savvy Chinese forces could make themselves the stronger contender—and win—even after starting out a war from a position of inferiority. Suitably updated for contemporary times, surroundings, and technology, Maoist methods are suitable for warfare in offshore waters and skies. If a potential foe presents you its playbook, by all means study it. Knowing the enemy is half the battle.

Meanwhile, imitation is the sincerest form of flattery. Not just Chinese but Americans can take inspiration from the Maoist paradigm. Mao’s famous three-phase scheme for flipping the script against a stronger antagonist merits attention from makers and executors of U.S. maritime strategy. Admiral J. C. Wylie provides an assist via his concepts of “sequential” and “cumulative” operations. Sequential operations are linear in character; they can often be plotted as continuous lines or curves on a map or nautical chart. Tactical engagements take place in sequence, one after another in time and space, until a force reaches its goal. Each action depends on the ones that came before and shapes the ones that come after. Simple.

Cumulative operations are a different creature. A force stages many tactical engagements in a scattershot campaign. Individual actions are unconnected to one another in time or space. No single engagement does the adversary grave harm, but the results add up. They wear down the opponent little by little in, well, cumulative fashion. Wylie vouchsafes that cumulative operations are indecisive in themselves. Yet he also affirms that they can be a difference-maker in a contest between evenly matched pugilists. Best of all for Maoists, the cumulative approach is an option for the weak where the sequential force-on-force approach seldom is.

And that’s the basic insight underlying Maoist strategy. In Wylie’s parlance you could sum up the Maoist approach thus: start cumulative, go sequential. The lesser contender needs time to get organized, muster manpower, armaments, and martial resources of all types, and learn how to fight. But It need not and, quoth Mao, must not remain militarily passive during this opening phase of conflict. Just the opposite. It should harry the foe at every opportunity, enfeebling hostile forces even while building up its own strength. In so doing the weak narrow the force mismatch—improving their standing relative to the foe.

Eventually, according to the Maoist scheme, the weaker combatant will narrow the mismatch to zero. At that point the first phase gives way to the second. A strategic equilibrium ensues as the belligerents jockey for superiority, augmenting their power while trying to attenuate the opponent’s. The erstwhile weak continue prosecuting active operations while incorporating increasingly ambitious and conventional hardware, tactics, and operations into the effort.

And lastly, the Maoist combatant accumulates enough resources and fighting skill to break the strategic stalemate. Its commanders launch a conventional counteroffensive, venture frontal battles, and win. In short, active defense is intensely offensive in outlook. Offensive efforts commence on the tactical level almost immediately and ascend to higher levels of war as success on the lower levels—and during earlier phases in the Maoist scheme—permits. It’s all offense, all the time for the Great Helmsman.

What does start cumulative, go sequential mean for U.S. forces in the Western Pacific?

First, it means being candid about the correlation of forces. In all likelihood U.S. forces will not start off a conflict in China’s environs as the brawnier contestant. Commanders should admit that up front and base their plans on it. If fortune graces American arms, the United States and its allies might start off in phase two, the strategic equilibrium, and build up to phase three, the conventional offensive that yields victory. But that seems doubtful.

More likely the allies will commence operations in the upper reaches of phase one. They don’t need to start from nothing the way Mao and the Red Army did a century ago, but they will probably be the weaker force and need to comport themselves accordingly. They will unleash active defense and work their way to phase two. Forces already in the region will make trouble for the PLA while summoning reinforcements from North America. Once reinforcements make their way into the region, the allies will amass superior firepower on regional battlegrounds for action. They will advance through the Maoist scheme until outright victory becomes thinkable.

Sounds rather pessimistic, doesn’t it? But it’s safest to premise strategy on the pessimistic assumption that the balance of forces will relegate the allies to phase one. Either the assumption is correct, and war plans will fit with forbidding times and surroundings. Or it’s incorrect. If so commanders will be pleasantly surprised and can step up their plans.

Second, starting cumulative means waging tactical actions up and down the Asian seaboard to start cutting the PLA Navy and Air Force down to size. America will “stand in” rather than stand off. U.S. Marine and perhaps Army units will loft anti-ship missiles from Pacific islands to help deny China’s navy the use of the sea, Air Force bombers will sow sea minefields and aim more missiles at the Chinese fleet, and Navy warships and fighter/attack aircraft will lend their own firepower to the effort. Joint forces will mount a local superiority of force against individual PLA units and overpower them, Maoist style. Pacific waters will become a killing ground.

And third, going sequential means reversing the force imbalance and fighting a decisive engagement in Clausewitzian or Mahanian style. Once the allies rule sea and sky, they can put the maritime common to whatever use they please. They can sink the rest of the PLA Navy, bar the high seas to Chinese merchantmen to bring the economic hurt, besiege and evict PLA troops from any territory they may have seized, and on and on. Maritime command bestows a host of options on the victor.

There is a wrinkle here, though. What happens when you pit Maoists against Maoists—when, in other words, both combatants join the fray assuming they’re outmatched? This is a real possibility, and one Mao Zedong says little if anything about. Considering its statement of fealty in China’s Military Strategy, the PLA will probably remain true to its Maoist active-defense strategy. The allies will do the same if they heed the counsel compiled here. A cumulative-on-cumulative struggle would probably place a premium on guile, deception, and maneuver as each force sought to arrange local actions in which it held the tactical advantage. A mêlée of some sort would convulse the China seas and Western Pacific.

That might seem to imply that the competitors will pursue symmetrical campaigns against each other, but that need not be the case. There are many varieties of cumulative operations. Plus, maritime warfare is a three-dimensional, intensely joint, multidomain endeavor nowadays. Dueling Maoists might concentrate their cumulative efforts in areas where they hold an competitive advantage, in hopes their efforts will yield outsized impact on the foe. At a guess the allies would put the accent on undersea and irregular combat along the first island chain, where plugging up straits and blocking east-west movement between Chinese home waters and the high seas would assume top priority. The PLA might well reply mainly in the aerospace domain, using shore-based missiles and aircraft to pummel allied surface forces and ground troops.

In short, a Maoist-on-Maoist war might be a asymmetric affair involving asymmetrical methods, platforms, and weaponry. One imagines wargamers in military and civilian think tanks would profit from probing the likely dynamics of such a conflict.